"It used to be very difficult at home" says Soe Soe*, a quietly spoken, 16 year old Karenni refugee girl in the Ban Mai Nai Soi refugee camp in Thailand close to the Burmese border. Soe Soe’s parents fled to escape the decades long ethnic conflict in eastern Myanmar to seek refuge in a remote camp in northern Thailand. Soe Soe was born in the camp, and with no legal right to leave, the camp environment is all she has known in her life. Soe Soe’s father passed away when she was 12, and her mother remarried a man whose alcoholism caused him to be extremely abusive to her and her mother. “My father passed away,” Soe Soe remembers, “and I was very scared of my stepfather as he was always drunk. He did bad things to us and made me very unhappy”. To escape the situation, Soe Soe married at age 13, moved in with her husband’s family, dropped out of school and was pregnant by 15. 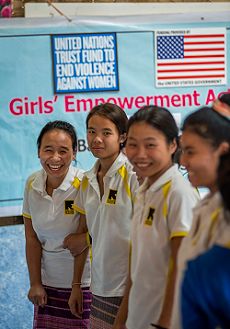 Soe Soe was referred by members of the community to the Girl’s Empowerment Project, a project run by the International Rescue Committee, and supported by the UN Trust Fund to End Violence Against Women. The project brings together vulnerable, adolescent girls in a safe space in the refugee camps to make friends, gain support, practice communication and learn life skills in order for them to look forward and plan their lives with confidence. Soe Soe now has a 6 month old little boy and attends the project regularly. “I enjoy attending the sessions and I Iike learning new things. I used to get short tempered and have fights often, now I have learnt how to have better relationships with my husband and family.” With no options for refugees to integrate in Thailand at the moment, and uncertainty surrounding the situation in Myanmar, Soe Soe and her family may consider resettling to a third country though there are many barriers to overcome. “I don’t know what will happen in the future”, she said, “but for the coming years I plan to continue to learn new skills, take care of my family and be happy”.