More than 150 students came to a dialogue on Sunday to exchange their thoughts and experiences with gender stereotypes in their everyday life and what they can do to contribute to breaking the stereotype cycle and build an equal society for both women and men.

“When my younger brother started his high school, he had to choose either mathematics or literature as major curriculum at school. As you know, it is very important because it will affect the entrance exam to universities and his future career. My parents came to ask his teachers and they suggested mathematics, because it is more suitable for a boy. It is a common saying that boys attending dance or literature classes are not real boys or men,” said Hang, one of five guests at the dialogue.

Gender stereotypes are at the root of gender-based discrimination and are critical in perpetuating inequalities. They are widespread in society and prevent people, especially women and girls, from developing their full potential and following their aspirations, by restricting them to areas and behaviors that are considered appropriate for their sex. The youth event “Stand Up to Gender Stereotypes Around Us in Everyday Life!” at the Vietnamese Museum of Ethnology last Sunday highlighted how influential gender stereotypes can be in determining people’s educational or professional opportunities and identified broader implications in terms of equality for everyone regardless of their gender. 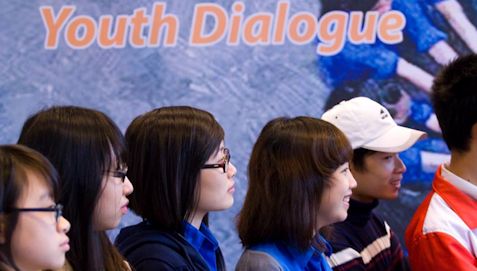 Though Viet Nam has made remarkable efforts to promote gender equality, challenges still remain. According to a research of the General Statistic Office in 2010, 58% of ever married women have experienced domestic violence in their lifetime. Patriarchal norms have created a society in which violence against women is considered acceptable and a private family issue which is often hidden. As a result, women tend to bear violence, rather than seeking support and justice. Son preference is strong in Viet Nam, where families value boys more than girls and increasingly practice sex-selective abortion. This explains why more boys than girls are born in Viet Nam.

Gender stereotypes also further marginalize those whose gender expression does not conform to expectation from society by defining how each gender should act and behave in a certain way. Notably, those who do not appear to be either male or female, such as transgender people during transition and intersex people, are deemed abnormal by society at large, and are denied their fundamental human rights.

“Gender equality means not only equality of rights but also equality of opportunities and equal freedom to make your own choices regardless of social pressure, in every field of life, being it your university studies, your professional career, your gender identity or your sexual orientation. Gender equality is not women’s problem. It is an issue that concerns society as a whole” said Ms. Shoko Ishikawa, UN Women Country Representative in Viet Nam at the event. 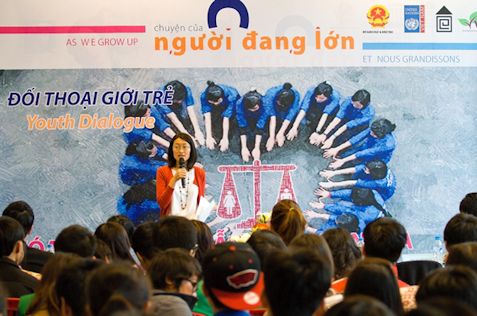 The event was a peer-to-peer learning talk show for young people with participation of guests including Ms. Cao Thi Ho Thuy, a gender expert from CGFED, a Vietnamese NGO working on gender equality, Mr. Tuan Tu, a famous MC and actor, Ms. Le Anh Phong, a transgender girl and two students Tran Thi Thanh Hang, Pham Thi Giang, who created the two videos on gender quality from the “Adam in the new era” campaign screened at the event. All guests had open dialogue with participants about their own stories and encouraged people to challenge social gender stereotypes around them towards an equal society for women and for all. Students participated with enthusiasm in the ‘Gender Quiz’ and learnt more about gender issues in Viet Nam. Some of them also recorded video messages, explaining what they will do to break gender stereotypes in everyday life.

“Breaking gender stereotypes is not only a woman’s job. It needs the involvement of all men, women, boys and girls, old and young. We need more songs, poems, books, films, paintings, articles and simply, more voices and daily actions that respect and strive for gender equality across the gender spectrum”, shared Ms. Katherine Muller-Marin, UNESCO representative in Viet Nam.

The youth dialogue was organized within the framework of the exhibition “As we grow up” by the United Nations in Viet Nam including UN Women, UNESCO and UNDP in collaboration with the Ho Chi Minh Youth Ho Chi Minh Youth Union and the Museum of Ethnology.