After the devastating earthquakes in Nepal, a local woman takes an active role in humanitarian action as an interpreter and social mobilizer.

A few days after the 7.8-magnitude earthquake hit Nepal on 25 April 2015, the the wounded started streaming in to Gorkha Bajar, a small town some 150 kilometres from the capital of Kathmandu. The epicentre was less than four hours away by car on rough mountain terrain. As some villages didn’t have roads, many injured were flown in to the district headquarters in Gorkha Bazaar by helicopter.

“Survivors were everywhere, by the roadside, in open fields; it was total chaos,” says Sarita Dhakal, district coordinator for Women for Human Rights (WHR), an organization that works for the rights of Nepali single women and UN Women’s local partner in Gorkha.

A few days later, shelters were set up in front of the Gorkha Palace Museum. When Ms. Dhakal and her team arrived at the site, with dozens of small tents inside the museum, they found over 400 injured survivors. They set out to document them.

But they faced a big obstacle. “Very few people actually understood what we were saying,” says Ms. Dhakal. Many of the injured were from the mountainous part of the district, where the national language Nepali is not spoken. “We hit a wall; no one on our team could speak the Gurung language.” 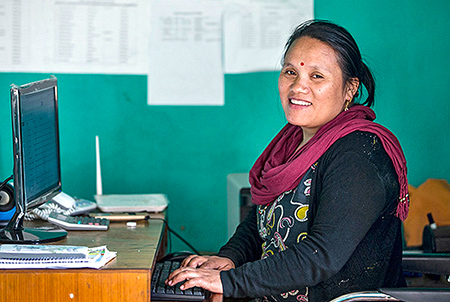 In the same tent, Suk Maya Gurung, 35, was nursing her six-year-old back to health. Ms. Gurung had brought her two daughters from the village of Gumda, via helicopter so she could take her daughter to the hospital.

Ms. Gurung knew many in the tent because they were neighbours, family and friends. Some years ago, she had taken first aid training, so those she knew in the shelter came to her for advice on how to dress wounds and prevent infection. “There were so many people in need,” she recalls.

Ms. Gurung volunteered her services and started helping out with interpretation, talking to the community, finding out what their needs were.

“In the weeks that followed, Ms. Gurung became such an invaluable member of the team,” says Ms. Dhakal. “She knew the community. She could talk to them directly. She was the one her villagers and friends trusted.” Ms. Gurung was hired as staff after the initial weeks and has been working as a social mobilizer for WHR ever since.

Ms. Gurung finds the work very fulfilling because she gets to work with the community and use her social and language skills. “I have learned a lot at WHR—about women’s rights, domestic violence, gender discrimination, women’s property rights and about sexual violence,” she says.

Whenever anyone in her community is in trouble she is the first point of contact for WHR. Ms. Gurung visits homes, keeps up with news from her community, and can often be found talking to women and children at the Multi-purpose Women’s Centre (MPWC) in Gorkha Bajar, which WHR set up with support from UN Women Nepal. As of February 2016, 1,269 women, including older women, women living with disabilities and widowed women, have received various kinds of services form the centre.

“The MPWC is a safe space. I may not be equipped to deal with all the issues that come to me, but there are people who can help with counselling, with legal aid, livelihood support, etc.,” she says.

Recently, Ms. Gurung helped stop two women from her village from being trafficked. “In my rounds, I learned that two women were being taken away by pimps to India for work, so I immediately contacted the district women and children officer,” she says. With the help of the police, and WHR Kathmandu offices, they were able to send message to the border patrol that intercepted and sent the women safely back to their families. “It is successes like these that make me proud of the work I do,” says Ms. Gurung.

Raised by a single mother, Ms. Gurung struggled her entire life. She was able to attend school but had to stop after Grade 10 for lack of money. At 17, she was married off to a man who worked in the Nepalese Army, and had few opportunities to work.

Ms. Gurung believes that in order to be empowered, women have to be financially self-sufficient. After her stint with WHR, she is looking to learn a new skill so she can earn a living. “I want to create jobs so that women don’t have to depend on anyone,” she says. “Social service is my calling and I want to contribute by making women financially independent.”