At the launch of the National Inquiry into Family Violence Report in Samoa. Photo: UN Women/Mele Maualaivao

Apia, Wednesday 12 September 2018: Family violence sits behind a veil of silence which allows it to continue to menace the lives of our people especially the most vulnerable among us.

This is according to the National Inquiry into Family Violence Report 2018 released today with support from the UN Women Fiji Multi-Country Office (MCO) along with UNDP, Asia Pacific Forum for National Human Rights Institutions (APF) and the Commonwealth Secretariat.

The National Inquiry into Family Violence Report by the Samoa Office of the Ombudsman/National Human Rights Institute (NHRI) highlights the issue of family violence in Samoa based on evidence collected from testimonies and village visitations, during its National Inquiry held in 2017. The Inquiry was carried out pursuant to s.34 of the Ombudsman Act 2013.

“We thank our partners, without whom the Inquiry and Report would not have been made possible. Their support and technical assistance throughout this project further reaffirms their commitment to the protection of women, girls and children of Samoa from family violence and promotion of their human rights,” said Maiava Iulai Toma, Ombudsman.

Speaking at the launch, held at the TATTE Conference Centre on 12 September, the Honorable Prime Minister and leader of the Human Rights Protection Party, Susuga Tuilaepa Sailele Malielegaoi, said “family violence has gravely impacted the lives of women and girls and has contributed negatively to the upbringing of our children.”

“On this day, for the sake of the future, it is up to us and especially those in positions in all levels of our society to stand up and be counted – to demonstrate our dedication to the fa’a-Samoa and Christian values upon which this country is founded,” said the Hon. Prime Minister.

“Through the National Inquiry and today’s release of its findings, we hope and urge that we together take action to address this issue head on at last. It is time and we can do it.  Let us not shirk our duty to future generations of Samoa. We can reclaim and strengthen our social fabric and take pride in true Fa’aSamoa and genuine Christianity.”

“Family violence is a serious issue in Samoa,” said Loukinikini Vili, Director of Human Rights at the Office of the Ombudsman/NHRI.

“Throughout the Inquiry it became increasingly apparent that family violence in some form has become an accepted part of life for most people in society. It is something which is inevitable, tolerated or simply goes unnoticed. This in itself is a significant barrier to both reporting family violence and contributes to an ever worsening cycle of violence at a societal level,” said Ms Vili.

“The Inquiry therefore provided a platform to inquire into reasons why this is the case and also identify existing structures and institutions (e.g. church and Fono a Alii ma Faipule) with potential to contribute to identifying solutions and effective actions to curb family violence.”

“One of the key themes that emerged from testimonies is that family violence thrives because it is kept behind closed doors, where perpetrators are allowed to continue under no threat of having to face up to their responsibility. It is about time that we openly talk about these issues, front up and allow the right thing to be done,” said Maiava Iulai Toma, Ombudsman.

He further added, the Government, the Village Fono, churches, parents, may see the findings and recommendations of the report as ceding authority, but this is not the case. In embracing the proposed societal, political and religious reforms, everybody in Samoa will further be empowered.

The Report acknowledges greatly that changes to existing attitudes of our people and established practices will have to be made but in a society which values the collective above all else, this should be welcomed with open arms. 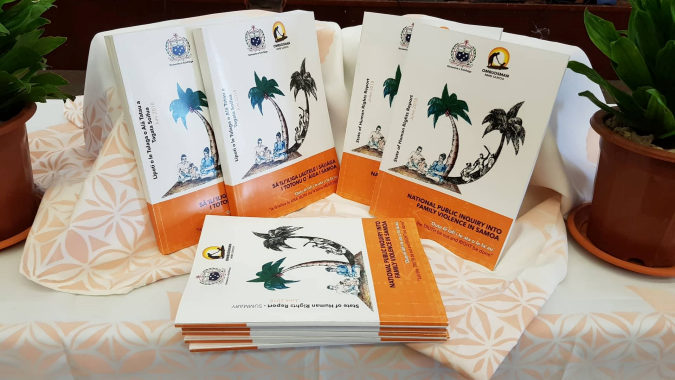 During the National Inquiry, which was open to the public, testimonies from stakeholders and survivors of violence against women and girls were heard over a three-weeks.

“I want you to know that you are not broken, you are not worthless, and you are not to blame,” said a survivor of child abuse during her powerful testimony at the Inquiry.

“The Report’s findings amplify to the broader public many of the existing – and some new - challenges ahead for Samoa to reduce its levels of violence against women and girls,” said Ms. Vili.

“Family violence impacts so many women and their families in Samoa, so it is positive the Inquiry has contributed to making this a national public health issue calling upon each and every one us to take an active role to help end this violation of human rights,” she said.

Copies of the National Inquiry into Family Violence Report are available at the Samoa Office of the Ombudsman/National Human Rights Institute (NHRI) and online [www.ombudsman.gov.ws].