Universities of Thailand no longer keep violence on campuses in silence Bangkok, Thailand — Students of Chulalongkorn University today raised their voices to bring gender equality conversations out in the open at universities to create a safe and gender-equal campus for all at the very first kick-off event of the HeForShe University Tour in Bangkok.

Together with Chulalongkorn University, three more universities-Thammasat (10 September), Webster University in Thailand (11 September) and Mahidol University (13 September)-partnered with UN Women to launch the HeForShe University Tour. By opening up conversations about gender equality- and inequality- with university students, the HeForShe University Tour gives a chance to listen to and learn from students themselves about gender equality and opportunities to shape a better future for all. The Tour will also feature the #DontTellMeHowToDress ehxibition which overturns the myths of sexual violence that survivors of sexual crimes are somehow to blame for violence that happens to them. “You, students, have the real power to change the world,” Mohammad Naciri, Regional Director of UN Women’s Regional Office for Asia and the Pacific, remarked. “You are the ones who will draw a new blueprint for our societies, economies and political systems to uphold human rights and achieve gender equality, end violence against women. We call you ‘Generation Equality’. Be an activist, say no to gender-based violence, be an active bystander. The change starts with you.”

September’s Tour is special as it puts a spotlight on violence against women on university campuses. The UN Women Guidance Note on Campus Violence Prevention and Response underlines that consequences of violence against women are compounded by the unique conditions of campus life. Often, survivors still cannot avoid sharing classes or other common spaces with perpetrators which may affect academic performance, social functioning around campuses and more. Furthermore, inadequate support from universities can convey messages that such violence is tolerated and that the universities fail to meet their obligations and academic purpose. “Knowledge and action are key to combat gender-based violence, at both individual and structural levels,” Dr. Pirongrong Ramasoota, Vice President of Chulalongkorn University stated. “By creating an enabling environment for everyone to learn about unequal gendered power relations, universities can play an important role in fostering a culture of inclusivity that will help decrease gender-based bias, stereotyping and violence. We are proud to lead the way in Thailand with this HeForShe University Tour.” Dr. Ratchada Jayagupta, the Representative of Thailand to the ASEAN Commission on the Promotion and Protection of the Rights of Women and Children (ACWC) for Women's rights. Photo: UN Women/Pathumporn Thongking

“ASEAN launched the ASEAN HeForShe campaign in November 2017. Since then, ASEAN has been committed to the HeForShe Campaign and firmly believes that the youth are a key piece of the puzzle in achieving gender equality for numerous reasons.” Dr. Ratchada Jayagupta, the Representative of Thailand to the ASEAN Commission on the Promotion and Protection of the Rights of Women and Children (ACWC) for Women's rights said, “Besides the promotion and protection the rights of women and children, ACWC also contributes the equality among all genders and agrees that men and boys should become involved in current initiatives targeting gender inequality and stand alongside all genders as allies and activists.”

Thai activists associated with the University Tour include Watcharapon “Sia” Kukaewskasem, ending violence against women activist from the Akha community; Jomtian Jansomrag, writer and social activist; Emma Thomas, Muay Thai fighter and social activist; Busayapa Srisompong, pro-bono lawyer and founder of SHero; Thararat Panya, activist against violence on campus; and Shane Bhatla, Program Manager at OUT BKK, Transgender Activist. The speakers emphasized the need to shift away from societal norms that allow gender inequality to exist or excuse it, and the importance of engaging youth in dialogue about gender inequality.

The empowering stories of the activists led to a discussion on the roles of university administrations, professors and students to achieve gender equality and eliminate gender-based violence on campuses. Sirinya Cindy Bishop, model, actress and founder of the #DontTellMeHowtoDress campaign said, “Achieving gender equality never can be done without everyone’s participation. Everyone has a role to play, and now is the time to act.” 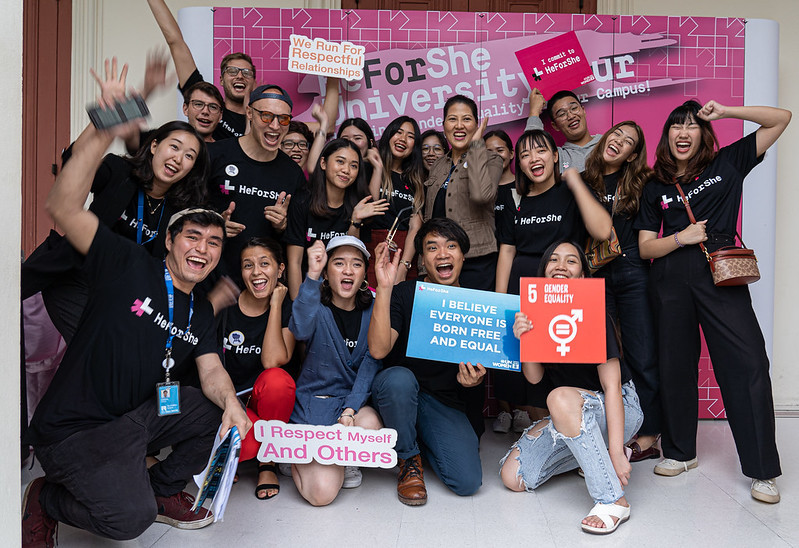 UN Women is the UN organization dedicated to gender equality and the empowerment of women. A global champion for women and girls, UN Women was established to accelerate progress on meeting their needs worldwide.

HeForShe is a solidarity movement for gender equality initiated by UN Women to engage men and boys as advocates and agents of change for the achievement of gender equality and women’s rights.