Universities have the same need to face gender-based violence and inequality as anywhere else, as well as some challenges related to campus life. The HeForShe University Tour in Bangkok sparked lively debate among students and staff and has initiated some key changes in practice.

Bangkok, Thailand — The HeForShe University Tour sparked debate across Bangkok campuses, driving several institutions to recognize the urgency of addressing gender inequality and violence on campus. In the wake of the tour, supported by UN Women, several leading Thai universities have launched or renewed commitments to strengthening partnerships between faculty and students, and to develop further research on gender-based inequality and violence.

“Violence against women and sexual harassment are expressions of power and control of one gender over another” he said at the opening of the event at Chulalongkorn University on 9 September, the first stop of the HeForShe University Tour. “We must put an end to this now. Everyone has a role to play”

The initiative took place in the wider context of calls for policies addressing sexual violence and gender inequality in universities around the globe. The tour also comes as the international community is taking stock ahead of the 25th anniversary of the 1995 Beijing Declaration and Platform for Action, which laid out a range of targets for gender equality and women’s empowerment.

The HeForShe University Tour featured several key components. Students were able to hear the real and raw impacts of violence, and see that violence can affect individuals from all walks of life during the storytelling sessions. Students reflected on their role in ending gender inequality, and encouraged the university administration to make concrete changes to end gender-based violence on campus during the panel discussions. Further, students translated their knowledge into practical initiatives for change during the tour’s interactive, group discussion sessions.

Described as “revolutionary” by some, the tour was well received by both students and staff. “Events like these are crucial in providing a platform for different members of the campus society to come together and discuss issues that they may face, in an open and friendly environment," said Stephen Berry, academic director of Webster University Thailand.

Under the theme of ending gender-based violence, the HeForShe University Tour featured the #DontTellMeHowToDress exhibition presented by Sirinya “Cindy” Bishop, model, actress, and activist. Bishop’s exhibition showcased the clothing worn by victims of violence to challenge myths related to sexual violence and prompt the reconsideration of the causes of sexual violence.

“Enough with blaming women for the clothing they were wearing or how they were acting at the time of assault” said Bishop. “This is a generational issue and we must end the tradition of sexual assault.”

The tour garnered concrete commitments from the various university administrations including adopting policies and protocols to make campuses gender-equal and safe, continuing the conversation of gender equality, strengthening partnerships between faculty and students, and developing research on inequality and violence.

Chulalongkorn University expressed interest in conducting research on sexual violence and harassment. Mahidol University International College will engage in both research and the creation of a policy targeting violence on campus. Webster University Thailand has committed to increase collaboration with students and continue the dialogue in and beyond the classroom. Thammasat University pledged to continue to support efforts for gender equality on campus, add institutional support, and create standard operating procedures to deal with sexual harassment.

Students also pledged to be leaders in changing norms, stereotypes, and attitudes around sexual violence. “I want a world where people are judged on their merit and action, not their appearance or gender,” said Mahidol University student Juan Paulo Gabriel P. Amurao.

Additionally, students from Stamford University who attended the HeForShe University Tour engaged in action for change on their own campus. With the support of UN Women Regional Office for Asia and the Pacific, Stamford University students led the #PolicyPlease campaign, resulting in the formation of a students’ Gender Equality club to advocate for positive change and the creation of a policy addressing gender-based violence on campus.

To learn more about the ways you can have a positive impact in ending campus violence and inequality, see UN Women’s Guidance Note; a tool outlining best practices when creating campus policies addressing inequality and violence against women. 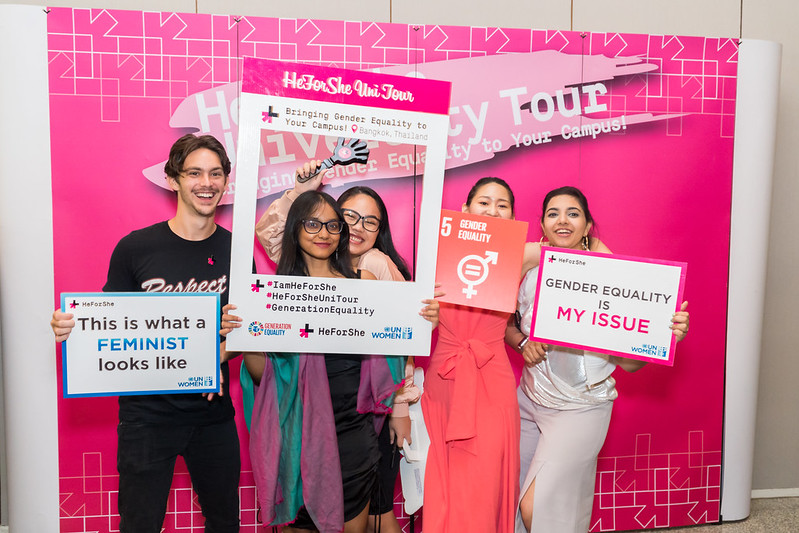