It is a big year for women – Executive Director 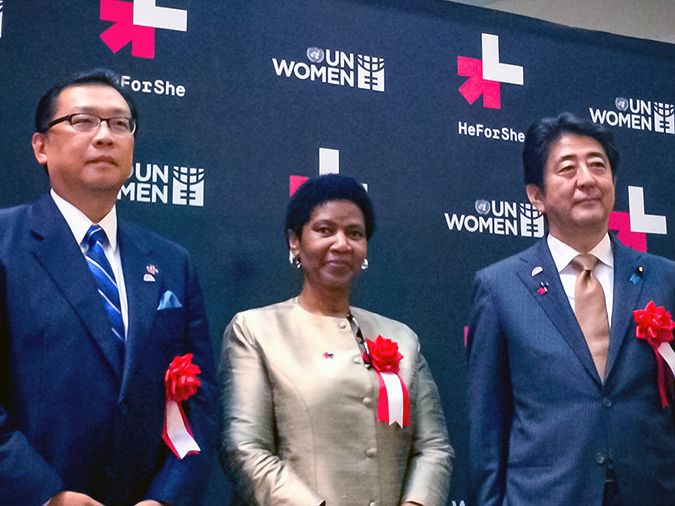 I would like to extend my warm thanks to Prime Minister Abe, and the Government of Japan, for once again organizing this extraordinary gathering of global leaders from governments, business, civil society and thought leaders.I am glad to be part of this second World Assembly of Women in Tokyo.

I want to thank President Johnson Sirleaf for sharing her inspiring story which always motivates. I would also like to thank the Prime Minister for his strong and consistent voice on matters of gender equality and women’s rights, both nationally, and internationally, and for being one of the 10 heads of state who are HeForShe Champions - men who stand and act for gender equality.

The UN Women team is already looking forward to the Prime Minister’s speech at the General Assembly, because he never fails to hit the issues that matter for women and girls.

So much has happened in the world since the first World Assembly of Women was convened here.

2015 is a big year for all of the UN family, for every member state, and for the people in every corner of the world.

It is a big year for women.

We celebrated the twentieth anniversary of the Beijing Declaration and Platform for Action with an in-depth assessment of its implementation.

This was a moment by all countries of frank and detailed review and stock-taking and making new commitments.

In its own report Japan said: “Japan will stand at the forefront and lead the international community to make the twenty-first century a world with no human rights violations against women, and to eliminate sexual violence in conflict.”

This commitment is very important. Especially now, as we count more than 500 days since the Nigerian girls from Chibok were abducted by violent extremists.

The report identified significant achievements by Japan such as the many revisions to laws related to promotion of gender equality; the active promotion, with incentives, of women’s participation in high-level decision making; and the promotion of a society where men and women can easily balance work and child-rearing.

It also highlighted the importance of passing legislation that involves men and boys, and we know that has just happened.

We appreciate these efforts, and we look forward to the implementation of the many big plans the government has put forward, which we will all learn from and which Japan I am sure will also take to the world.

The report also identified key lessons in the process of implementing the Beijing Platform for Action. One such area identified was the importance of consolidating rather than fragmenting implementation, as a consolidated approach helps to increase progress and impact.

Further, not just for Japan but for many other countries that submitted reports, important themes for further focus emerged from the reviews. These themes include the importance of gender mainstreaming and ensuring that work is implemented, not in one area, not by one department, but across government and society.

Another theme that emerged is the importance of legal reforms; not just in their adoption but in their execution.

These themes and findings have informed the new 2030 Agenda for Sustainable Development, together with the lessons learned from the MDGs.

Altogether the Beijing 20 review has been a broad consultative process. It has paved the way for a consensus that was invaluable when member states negotiated the Sustainable Development Goals, especially the gender goal, goal five, and the mainstreaming of gender in all other goals that were agreed by all countries.

This process has been about building the momentum that will ensure that between 2015 and 2030, when these goals will be implemented, we can hope for a world that will be consistently and substantively better.

To bring this to a very high level, we will host a Global Leaders’ Forum on Gender Equality and Women’s Empowerment, to focus on commitments by leaders in taking the agenda forward and using the lessons learned. This will happen on 27 September 2015. I want to thank the Prime Minister for leading from the front, for showing the power of one.

We have convened the first ever UN gathering of heads of state that will only discuss women and girls. It will focus on solutions and how we can make sure that between 2015 and 2030 we are increasingly and truly building a world that will change for the better for women and girls. How we will close the gaps and how we will make sure that women and girls are able to take their rightful place in society. We are thankful for the many member states who have already confirmed their participation and we are also very encouraged by the diversity of countries that have confirmed the participation of their presidents and prime ministers. Of course, it wouldn’t be complete without Japan. This will be a very special event.The role played by civil society in this journey has been phenomenal; the sacrifices made, countless. Now we need to escalate these challenges in each country to the first citizen. We see the possibility in a gathering like this to discuss with depth some of the game-changing initiatives that need leaders’ attention, such as the far-reaching law reforms to enhance women’s access to justice and implementation of policies and laws already passed. 128 countries still have laws that discriminate against women, with dire resulting impact on women. Almost all countries have work to do to fully utilize their own laws to address gender-based violence. We have best practice to scale up in this area, to save lives, to entrench and to protect the rights of women and girls.

The introduction of parental leave and universal affordable child care and early education is critical to fundamentally alter power relations between men and women for generations to come and give unprecedented opportunities to women and girls to be able to work, to be educated, to be independent and help foster inclusive economic growth and development.

In all countries, women are fined a “motherhood penalty” for being a woman. This is the term the International Labour Organization uses. It results in women being denied between 30 to 70 per cent of earnings in their life time. This affects millions of women.

In order for the post-2015 agenda to leave no one behind we need to ensure that we address some of these inequalities, such as equal pay between men and women for work of equal value, within agreed time lines. To continue to deny this right is an injustice. We have the Women’s Empowerment Principles to guide us in a systematic manner how to achieve this.

We also need a road map for girls’ education beyond primary education and for lifelong learning for women of all ages.

We need women to have full control of their reproductive rights and sexual rights and comprehensive, age-appropriate sexuality education.

Women need to be protected from sexual violence in all cases and in all times. All measures for peace and security must protect women and place women in leadership roles as peacemakers, peacekeepers who are deserving of reparations from the most cruel crimes that are increasingly being directed to women and girls from rape to torture. We need to be tougher because anti-terrorism activities are yet to fully grasp the engendered nature of terrorism that we are seeing these days.

We need a significant increase in investment in gender equality. In some cases and in some countries, only 10 per cent of approved country development plans for women are funded. A case for gender responsive budgeting is therefore most urgent in all countries and engendered ODA cannot be over emphasized.

We also need to go past the battles of under-representation of women once and for all, in all decision making bodies. Gender parity is necessary for economic and political development that is rights based and key for the substantial end of poverty and inequality.

Men and boys are a key community for a successful post-2015 agenda and to achieve substantive, transformative and irreversible gender equality.

We again thank the prime minister for his leadership in the HeForShe campaign as one of the heads of state who are grappling with this issue, and being role models. We also want to thank Japan for their active role and support on the global study for the 15th anniversary of Security Council resolution 1325.

I want to also thank and acknowledge Japan for the support given for our newly-established liaison office – as well as the Mayor Narisawa of Bunkyo-ku.

I want to emphasize the much-needed contribution of men in the private sector. As men continue to be the dominant leaders in that sector they should not wait for women to break the glass ceiling, but should just remove it, so that women can play their effective role.

At grand opening of our liaison office in Tokyo, with PM @AbeShinzo and our generous host, Mayor Hironobu Narisawa. pic.twitter.com/47nGedEaOe