This year marks the 20th anniversary of implementation of United Nations Security Council Resolution (UNSCR) 1325. To honor the occasion, we present stories from the leaders of Nepal's National Women Conflict Victim Network. Nepal's decade long conflict from 1996 to 2006 ended with the then Maoists cadre and the Government of Nepal signing the Comprehensive Peace Agreement. Though precise figures are unknown, Nepal’s Ministry of Peace and Reconstruction has stated in Nepal News that there were more than 17,800 deaths and at least 1,300 disappearances during the conflict. Study from Nepal Voices Report shows the conflict also displaced an estimated 150,000 to 200,000 people throughout Nepal. The period was also characterized by torture, sexual violence, unlawful detention and the use of child soldiers. Both the then Maoist forces and Government of Nepal’s Security Forces have acknowledged their responsibility for grave human rights violation that happened in all but two of Nepal’s 75 districts (under the former geographical structure).

The UNSCR 1325 and its subsequent resolutions focuses on women, peace and security. The resolution urges the government to immediately address the impact of conflict on women and acknowledge their contribution in conflict settlement and ensuring lasting peace. Nepal developed National Action Plans (NAP), Phase I and II on UNSCR 1325 and 1820 to prioritize focus on conflict affected women, girls and their families. In February 2020, the Ministry of Home Affairs endorsed NAP Phase II to the Cabinet and is currently pending approval.

In efforts to advance women’s leadership in securing sustainable peace, UN Women Nepal has been partnering with the leaders of Nepal's Women Conflict Victims. Through the partnership, we champion women as powerful agents for building peace and security.

The upcoming generations must learn about the tortures people faced 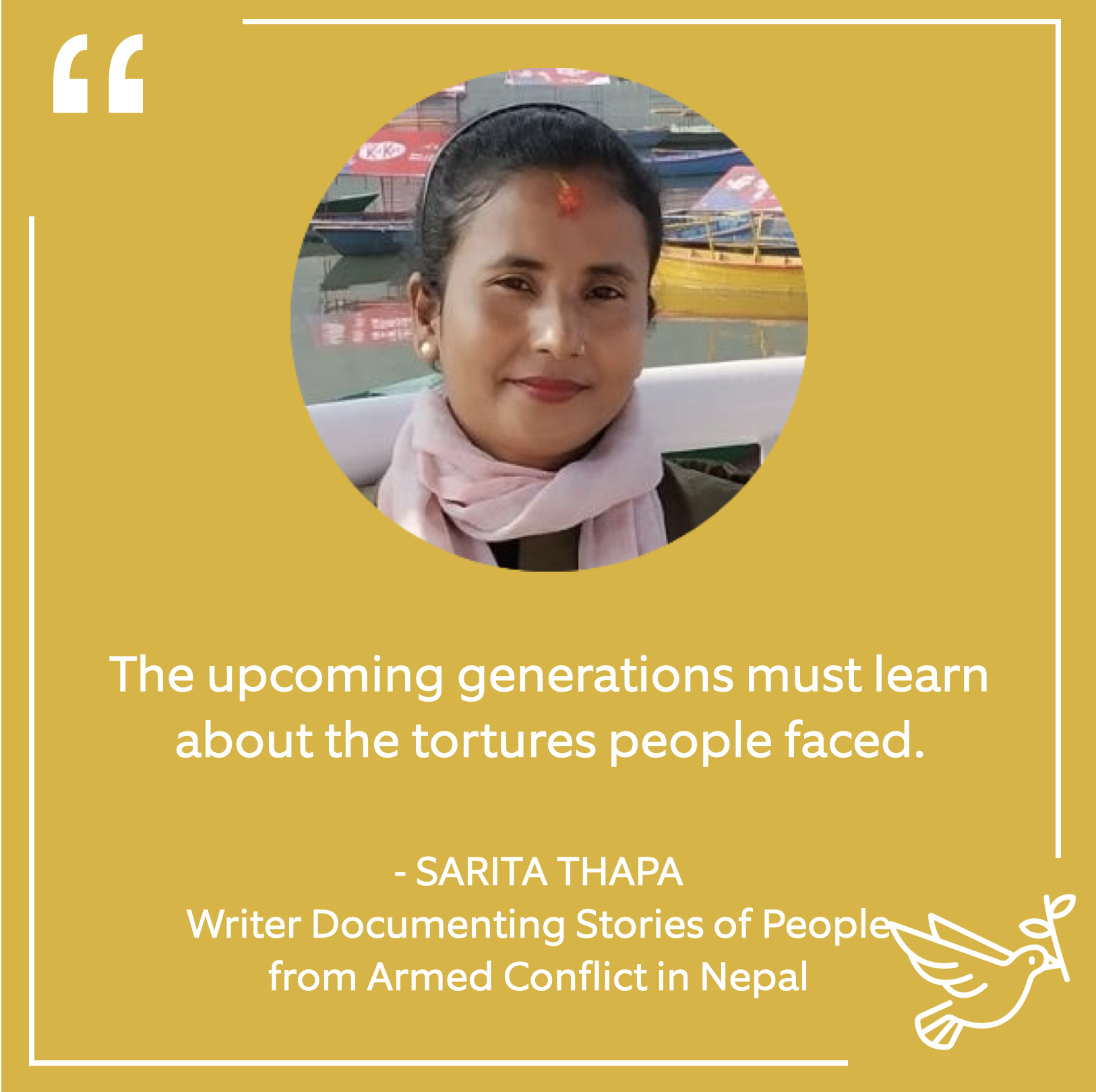 As a child, I always got good grades. I would dream of becoming a nurse when I got older. I was still in school during the armed conflict when Buwa (father) went missing. When I went to school after that, my friends started avoiding me. They would say I was ‘the daughter of Maoists’ (the opposing group in the armed conflict). Without Buwa there to support us, it was difficult to remain in school. I know if Buwa was still around my dream of becoming a Nurse would have come true.

Nepal must document the atrocities that happened in the decade-long armed conflict. It should document the stories of people who went missing, of people murdered, of people sexually assaulted. The upcoming generations must learn about the tortures people faced.

Thapa lost her father on 9th August, 1998 in the armed conflict of Nepal. 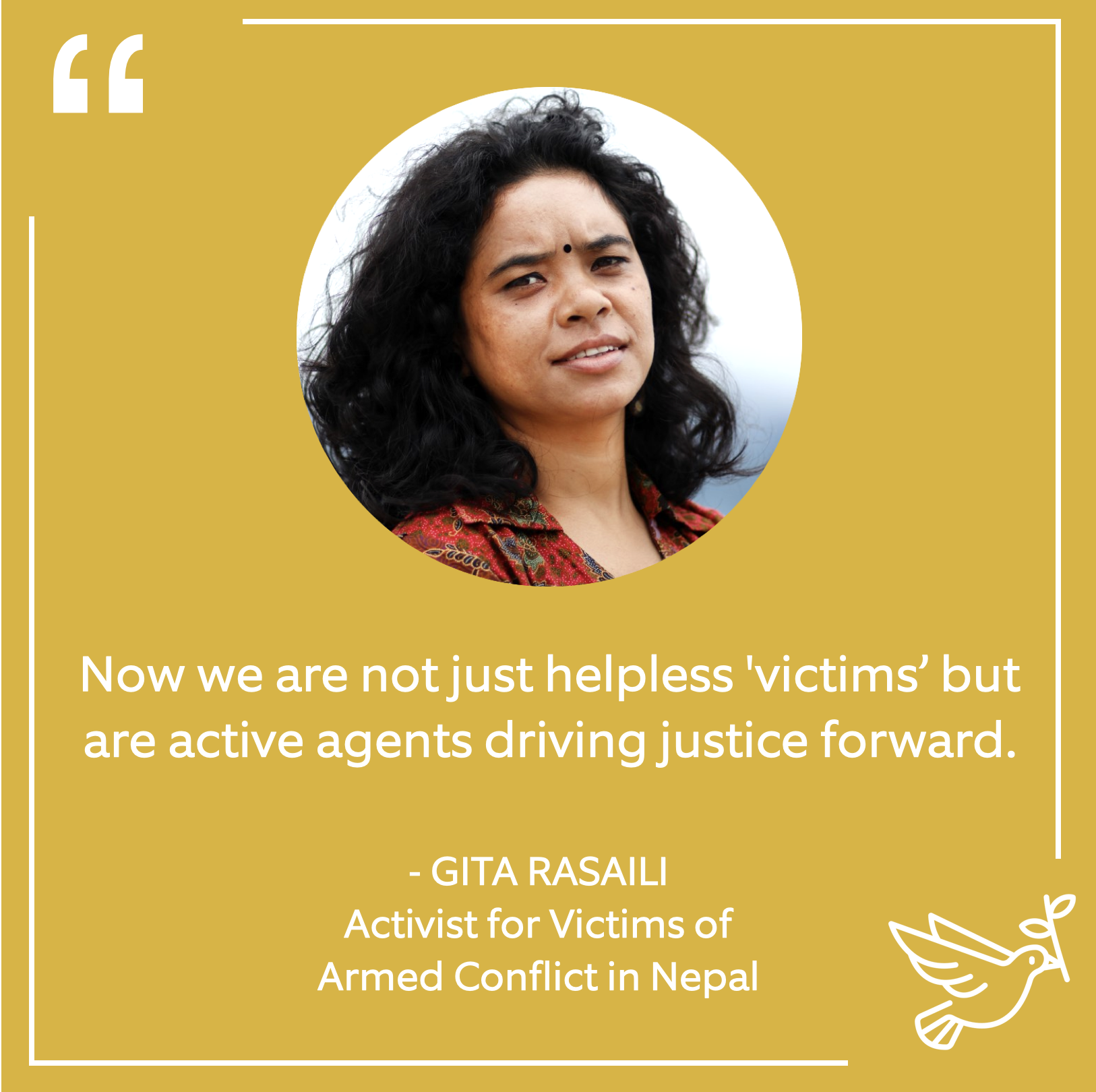 When we heard that the Nepali army murdered Dai (brother) our relatives told us not to cry. “What if people found out? What if the police found out? Don’t cry,” they said. The army killed Dai assuming he was a Maoist (the then opposing group) in the armed conflict. If the villagers found out about Dai's death, they would also assume that all of us were Maoists and start ostracizing us.

So, none of us could cry and Aama (mother) kept fainting. When we felt like crying, we went inside the house, cried for a bit and came out as if everything was normal. It still haunts me, how we could not even mourn when they murdered Dai.

Earlier we participated as ‘victims’ in events that sought justice for the people lost in armed conflict. We would share our stories of torture, re-live our grief and return home. Now we are not just helpless 'victims’ but are active agents driving justice forward. The UN in Nepal supported the Government of Nepal to engage victims of armed conflict in the government’s National Action Plan drafting committee. Our role in this drafting committee was critical. We prepared the National Action Plan Phase II prioritizing the need for investigation of the perpetrators, availing access to justice and reparation for victim’s families. Such efforts keep us going. But the sad part is that we are still waiting for the cabinet to approve the action plan for more almost a year.

Rasaili lost her brother on 4th February 2001 and her sister after she was gang raped at home by the Nepal army on 13th February 2004 in the armed conflict of Nepal.

— Gita Rasaili, Kavre, Nepal
An activist for the victims of the Armed Conflict 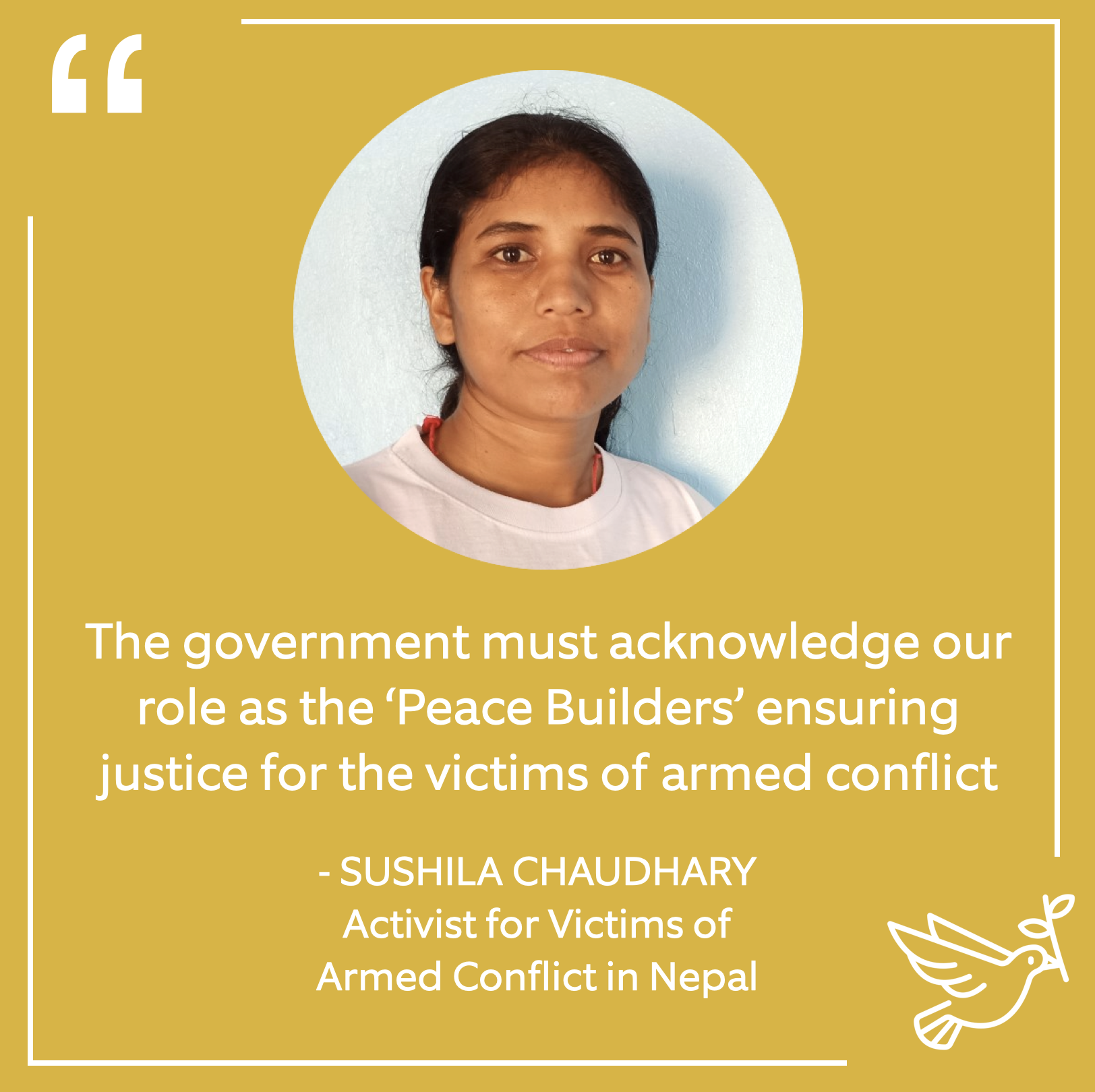 The Nepal army accused us of making explosives. They barged inside our home, pinned Buwa (father) on the floor with his face down. They furiously hit him on his back and dragged him outside the house. When I heard gun shots, I thought they had killed Buwa, but thank god they had only fired in the air.

For three months, Buwa could not stand on his feet. Aama (mother) feared going to the market to buy medication, what if they captured us? So, she heated oil and massaged his back until he was better. Even now, Buwa has severe back pain.

The Nepali government has signed many international human rights treaties including Convention on the Elimination of all Forms of Discrimination Against Women (CEDAW), the international women’s rights treaty. It is very important for to prioritize implementation of the treaties and completing its commitments on time.

— Sushila Chaudhary
An activist for the victims of the Armed Conflict

My only hope is that Nepal will never see a war again. No matter what, nothing is worth a war 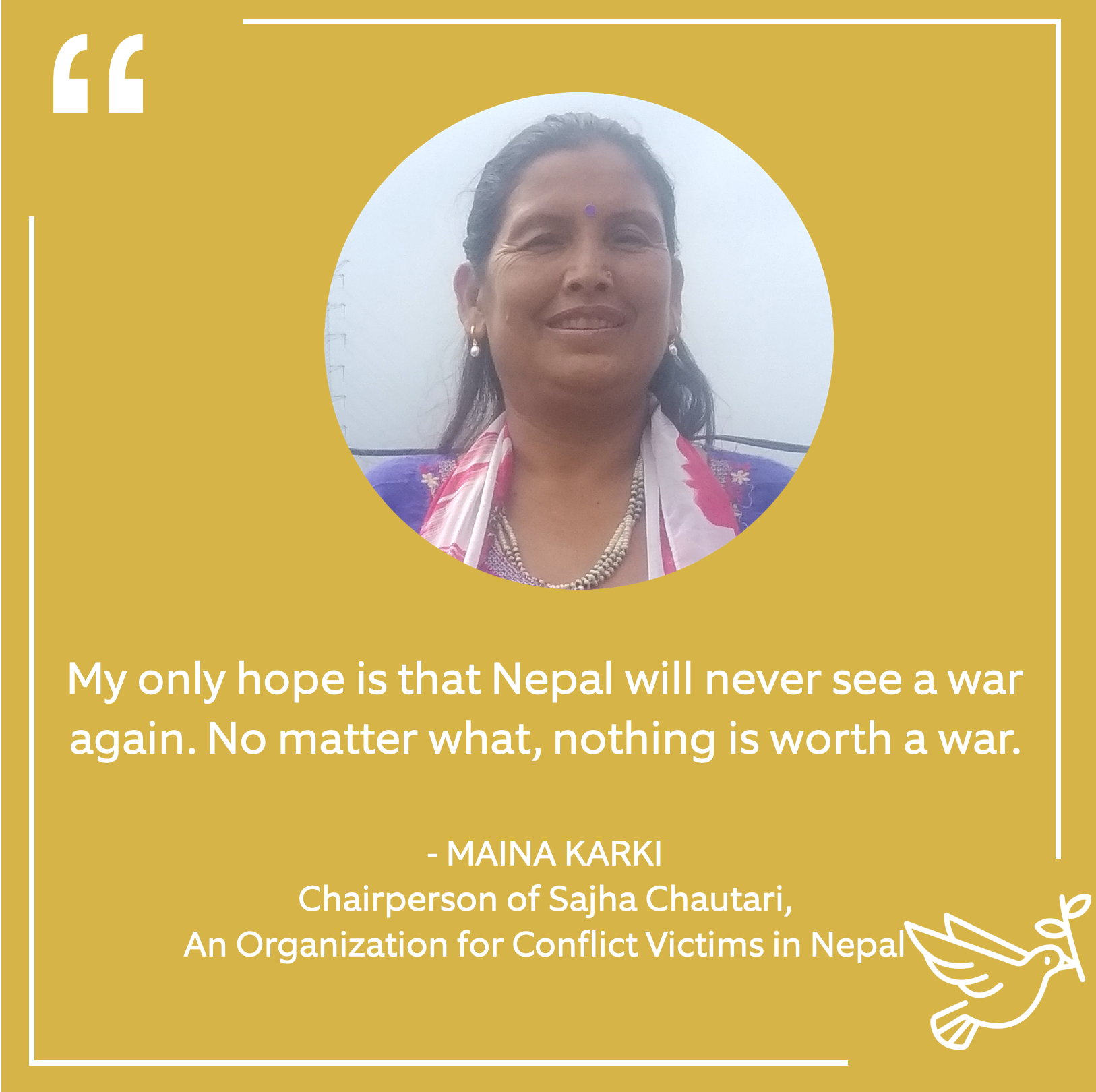 
My Sriman (husband) was a primary school teacher. During the armed conflict, the Maoist (the opposing group in the armed conflict) kidnapped him. I had given birth to our son at that point and was very hopeful they would set him free. But they murdered him.

When I am walking down the street, sometimes I see people who look like my Sriman. The brown hat, the striped sweater, exactly like my Sriman’s. Sometimes I also see him in my dreams. In these fleeting moments it feels like he never left us. But I miss him the most during festivals and my heart pines for him when I see other families, complete and happy.

My only hope is that Nepal will never see a war again. No matter what, nothing is worth a war.

On 2rd January 2005 Karki lost her husband in the armed conflict of Nepal.

— Maina Karki
Chairperson of Sajha Chautari, an Organization for conflict victims in Nepal

Without implementation of the policies we created for the justice of victims from armed conflict, our efforts to ensure justice are futile 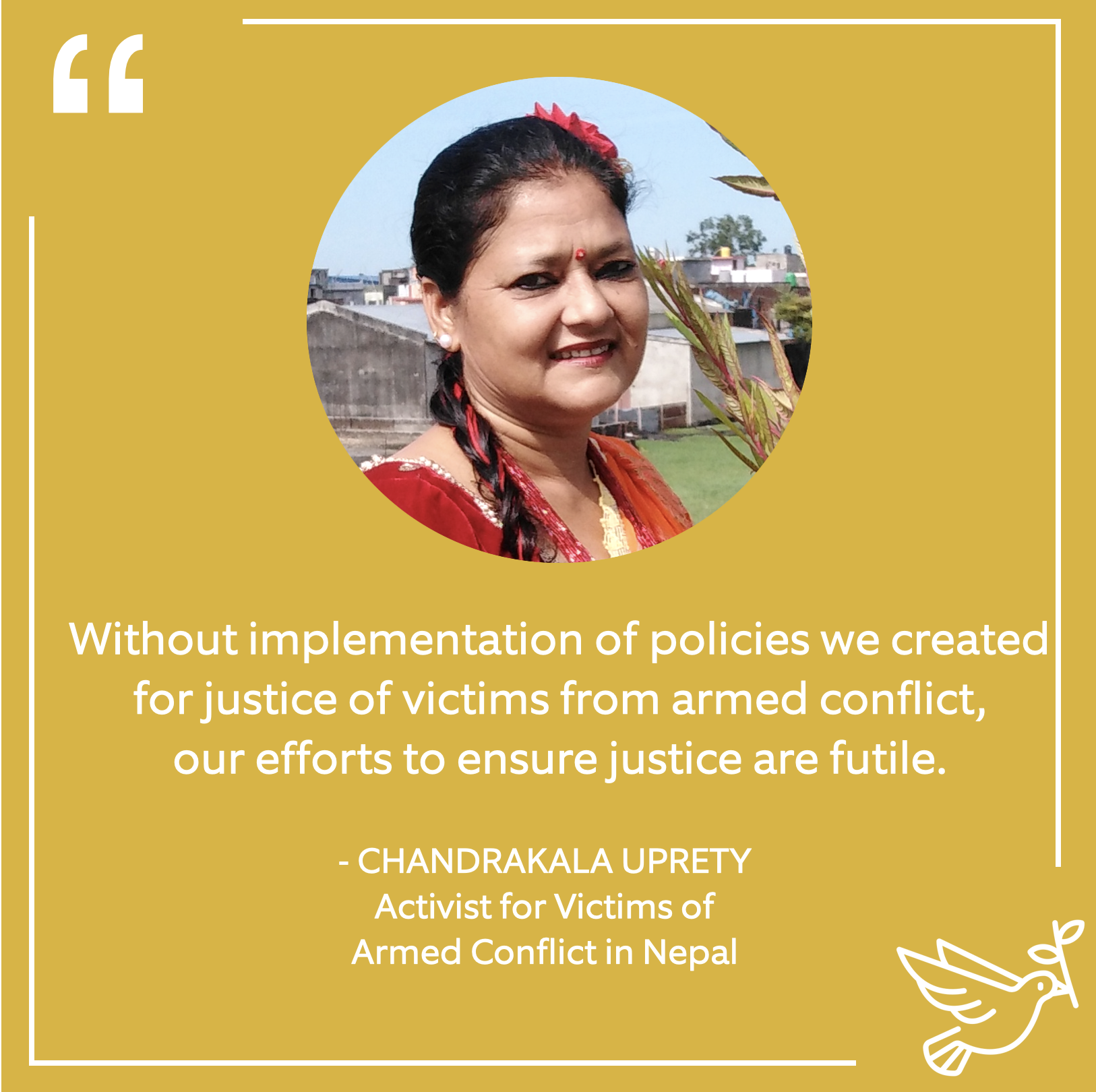 My Sriman (husband) was taken away by Nepal Army on the evening of 9th December 2003. But we found out only the next morning. For days we frantically searched for him everywhere, but he was nowhere to be found.

Even after all these years since I lost him, I still hear his voice. Inside my house or while walking in the streets, I hear him. Sometimes when someone knocks on the door, I feel like he has come. It is painful every day.

When my Sriman went missing in the armed conflict, I was alone, and I could not speak up in public about what happened. We were so scared; we could not even call ourselves the victims of the conflict. It was only later, when I saw there were many victims like us that I gained courage to speak up for justice. As peace builders, we are not only fighting for our own justice but are also fighting for the justice of many other victims.

But without implementation of the policies we created for the justice of victims of armed conflict, our efforts to ensure justice are futile. The Government of Nepal must bring into practice what is already in policies.

At six in the evening of 9th December 2003, Uprety’s husband was taken away by the Nepal army. He has not returned home since.

I heard the Maoists saying, “We killed someone who should not have been killed” 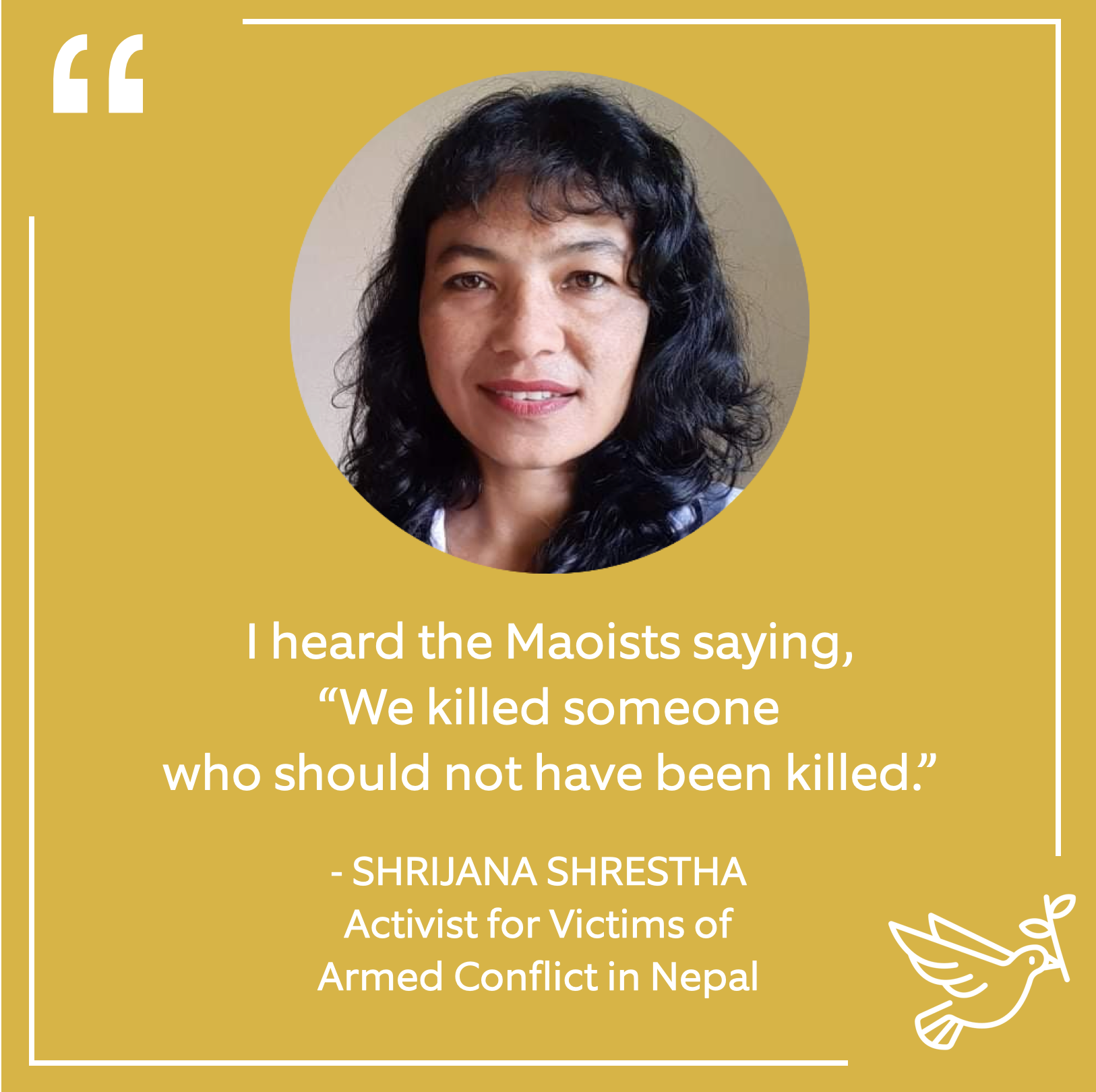 On 31st October 2002, the Maoists (the opposing group in the armed conflict) murdered my Sriman (husband). He was a well-known person in our community. No matter who you were, my Sriman was kind and treated everyone equally. After my Sriman died, I found out that they killed him out of a misunderstanding. I heard the Maoists saying, “We killed someone who should not have been killed.” I was a person who loved sleeping. But for four days straight, after I lost my Sriman, I could not sleep.

It has been more than 10 years since I started advocating for the justice of victims of armed conflict. But there has not been any significant result yet. Since there is inadequate representation of women in decision-making bodies, gender sensitivity and equality in practice is still a far-fetched goal. The government of Nepal needs to ensure equal number of women in all decision-making forums and ensure their meaningful contribution in policies for consolidation of peace and strengthening security.

Shrijana lost her husband on 31st October 2002 in the armed conflict of Nepal.

All victims from the armed conflict must get justice 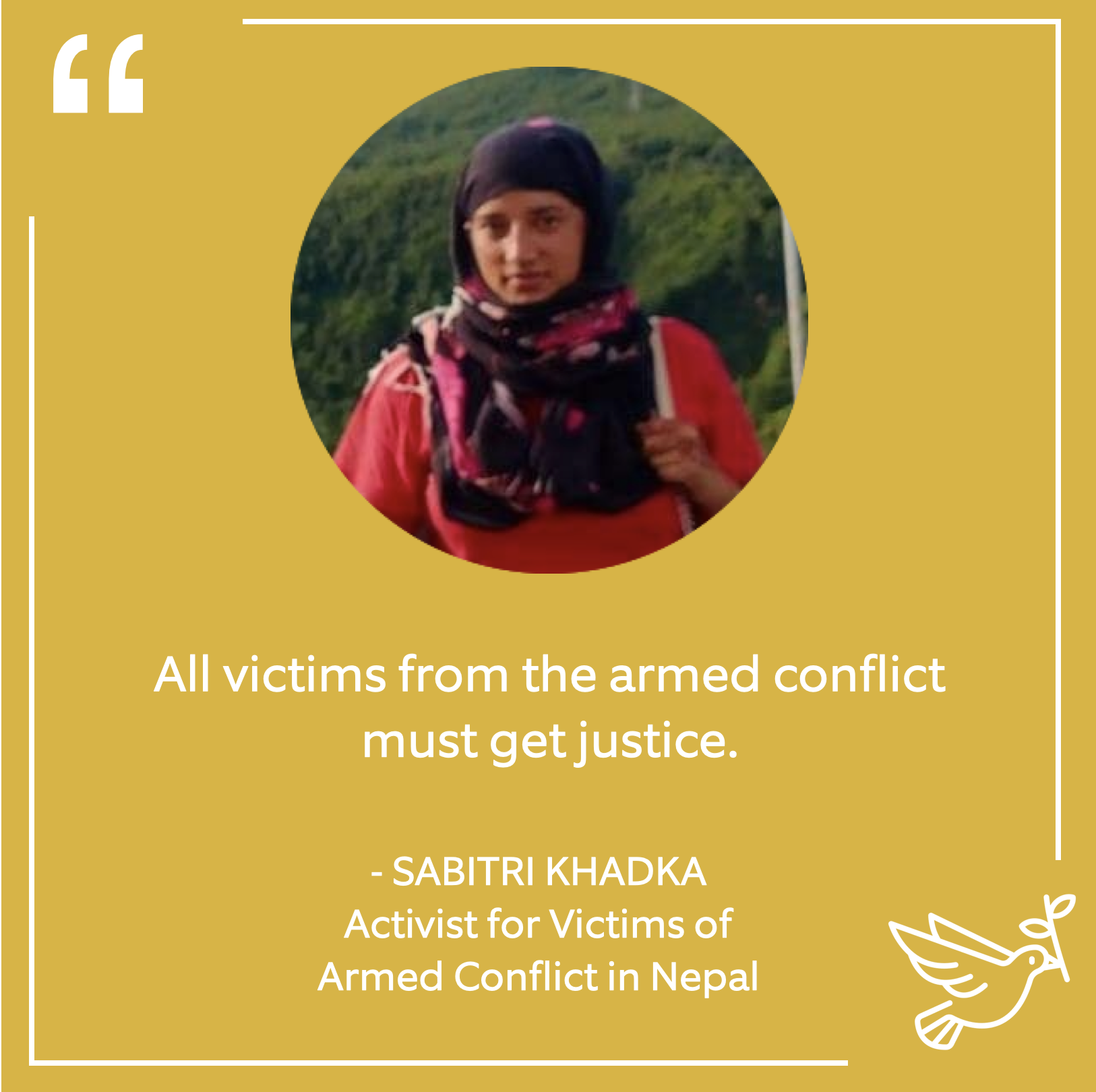 Buwa (father) was murdered right in front of my eyes by the Maoist group. We waited for two days in the cowshed with Buwa’s body. No one could come in to support us with cremation, because if they came inside, their life would also be at risk. I still see his murderers walking free today and it is agonizingly painful for me.

Khadka’s father was killed by the Maoists in 2005 during the armed conflict of Nepal.