In the words of Vaela Ngai: “Recognising, promoting and respecting women and their rights is not a foreign concept; it is part and parcel of most of our customary laws.”

This is a series of articles from the Inclusive Governance of Natural Resources (IGNR) project in Solomon Islands, the heroines of which are local leaders who participated in the Traditional Governance and Facilitation Bill consultations organized by the IGNR project this year.

The Traditional Governance and Facilitation Bill was introduced by the Democratic Coalition for Change Government in 2017. The Bills and Legislative Committee’s (BLC) withdrew the Traditional Governance Bill due to the lack of consultations with the Solomon Islands Bar Association, Civil Society Organizations, Churches, women and youth in the country. A series of consultations are now being held by the IGNR Project to raise awareness among these groups, especially local leaders, women and youth.

Vaela Ngai is the Supervising Director for the Women’s Development Division (WDD) within the Solomon Islands Ministry of Women, Youth, Children and Family Affairs (MWYCFA) and a Facilitator in the Traditional Governance Bill preparatory sessions for women leaders. 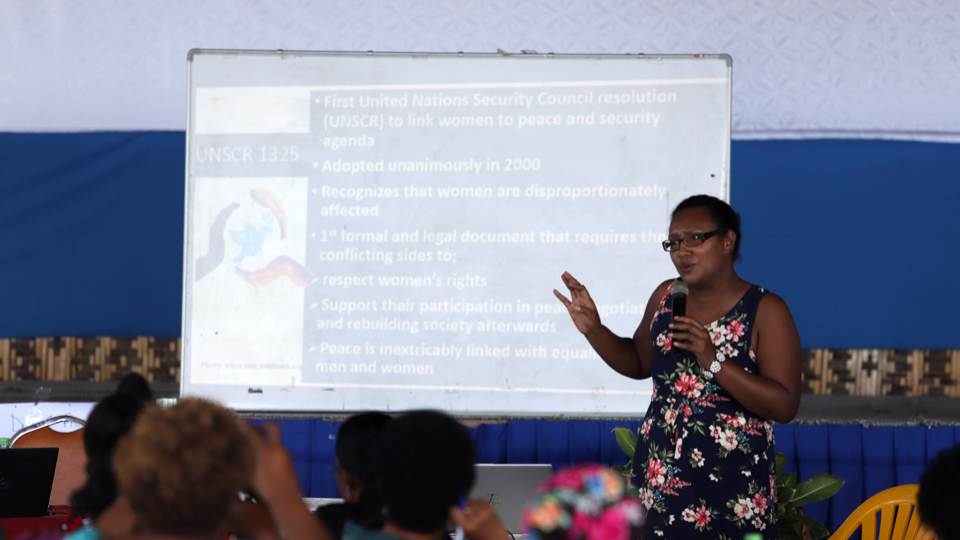 Vaela Ngai, Supervising Director for the Women’s Development Division (WDD) within the Ministry of Women, Youth, Children and Family Affairs (MWYCFA) and a Facilitator in the TGB preparatory sessions for women leaders. Photo: UN Women/Audrey Manu

Women of Solomon Islands are underrepresented in both state and local government authorities. Consequently, women’s experiences and perspectives remain missing and unheard in policies and laws which directly impact their future and lives. So often there is the argument that men can represent women and their rights in these directions. However, the fact that men experience life differently, they are not able to articulate women’s issues well or genuinely push for women’s priorities. This is quite important as women also make up half of our population, which means that half of the population is not represented and heard.

Consulting with women on the Traditional Governance Bill 2018, [which] was one of the Bills and legislative committee's recommendations in Parliament. That is when my activism journey started. For us, it was an opportunity to ensure that women are prepared to contribute and be a part of these consultations effectively as well as inform the Bill that seeks to formalise the traditional governance system, which is already male-dominated. Hereupon, I understood why these preparatory and mentoring sessions with women were so critical.

Before joining the Ministry of Women, Youth, Children, and Family Affairs, I had no experience in gender equality or women’s empowerment. Back then, this was an eye-opening opportunity for me because I saw that women were treated differently and, thus, learned about different forms of discrimination that women face every day.

The Women’s Development Division (WDD) has a small team, but a huge policy and legislative mandate to coordinate, implement, monitor and report on issues affecting women in the Solomon Islands. Since we, at the WDD, are limited of staff and resources, we always look for ways to partner with key stakeholders and donors to implement certain activities and programmes. Together with our line Ministry, we are working to promote gender equality in the Solomon Islands’ government and a whole state. Besides this, among our other priorities are empowering women in peace and security, ending violence against women and girls, promoting women’s economic empowerment and leadership, and women in health and education. One of the achievements, we are most proud of is the implementation of the Traditional Governance Bill consultations with women across the country, which we have conducted with the support of the Inclusive Governance of Natural Resources project implemented by UN Women and UNDP in the Solomon Islands.

People from communities are the owners of the land. They are the closest or the ones who are living on these lands; they especially rely on natural resources because compared to urban citizens, their lives depend on it. Thus, they and notably women, must fully enjoy their right to own and make decisions on land and natural resources.

One of the fundamental principles underlying most tribes’ cultures in the Solomon Islands is about to respect your neighbour, which, to draw your attention, means respecting women and keeping the peace in communities and societies. Recognising, promoting and respecting women and their rights is not a foreign concept; it is part and parcel of most of our customary laws."

The article is prepared within the Inclusive Governance of Natural Resources (IGNR) project implemented by UNDP in the Solomon Islands and UN Women Fiji Multi-Country Office, funded by the UN Peacebuilding Fund to support and empower local women of the Solomon Islands to ensure their participation in the decision-making processes.