In the words of Siunipa Pahulu: “Never let fear stop you from doing what you love” 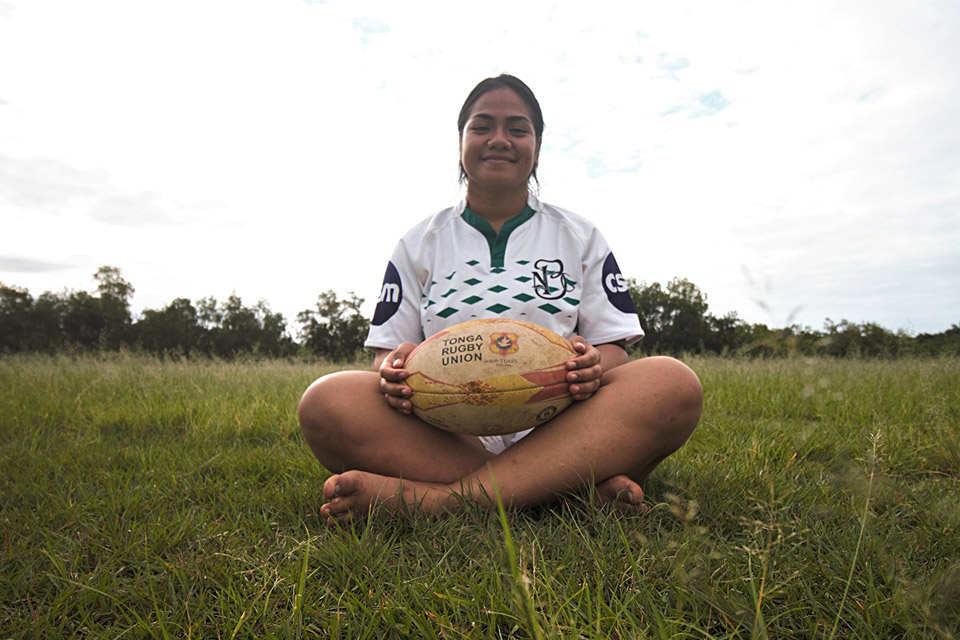 My name is Siunipa Pahulu. I turn 20 in November I come from the small Island of Ha’apai in Tonga, but I reside in Ha’ateiho, Tongatapu.

I’m a seamstress and I want to be a fashion designer one day.

I undertake rugby training every morning and afternoon, and during the day I sew clothes to support myself and my family.

I started playing rugby in February this year [2021] when there was a big tournament in Tongatapu and our little island started a women’s rugby team so we could take part in it. I ended up staying on the main island of Tongatapu and joined a women’s rugby club, the Kolofo’ou Lioness team. I was named the vice-captain of the team, and I am now playing in inter-district rugby competitions, again representing my little island Ha’apai.

I ended up playing rugby by accident, and I found out that not only do I enjoy it but it’s something I am also good at. It has instilled confidence in me that [I know] if I can tackle anyone on the field, then I can also protect myself outside, and stand up for myself and anyone else. Not only do I get healthier from the training, but I am also learning to use my brain when playing - I am learning how to play smarter. That’s why I like rugby - it makes you think deeper and analyse things.

I also enjoy netball. I like netball because when I was younger my sister used to take me to netball practices and games all the time, and I have been playing it ever since.

One of the things that pushes me to keep playing rugby is the comments and compliments people give me, especially my coach. He always gives me feedback on my game, where I need to improve, and encourages me. These little comments and feedback push me to try harder, be better and keep playing.

But I also face challenges when it comes to playing rugby. One of the challenges is my family does not support me to play the game. They would rather I play any other sport but rugby because they think it’s a man’s sport. One of the comments I keep getting from them is that the rugby team won’t come and take care of me if I get injured - my family will. I have managed to get my father and sister to come around to support me playing but I have been told this would be the last rugby tournament I will play in. I’m trying my best to play well in every game and video record all my games to send to him to watch, maybe that would be a thing that would convince him to let me keep playing? As of now my family is slowly accepting and supporting me playing the game.

Rugby is one of the important things in my life. If I miss one training session, for whatever reason, I don’t feel good because I will miss so many things being taught in that hour.It’s at times like this that I wish I had a supportive family like our captain. She’s a great rugby player, and I know if I have a little more support from home, my game will go to another level.

Before I started playing rugby, my friends were my supporters. They pushed me to just jump in and train, and when I finally started playing my biggest supporter is still my coach Richie Taliauli. He probably doesn’t know that the messages of support and encouragement he always sends me after our games are the things that drives me to keep going. Most girls probably check messages from their boyfriends, but I read the messages of encouragement and advice from the coach, that pushes me to try harder. I always compare the messages he sends me from previous games to our most recent games to see if I have improved as a player or not, and if I haven’t, then I’ll try and push myself harder. My coach is my biggest supporter, and I am grateful that he doesn’t care if I am a boy or girl. He is just willing to help anyone without expecting anything in return. He goes the extra mile for the players.

I have only just found out about the Talitha Project. I didn’t really know what they did until I was involved with the Ha’apai women’s rugby team. It was the first ever women’s rugby team representing Ha’apai and they helped us to get to Tongatapu. They looked after us and did sessions with us on leadership, and our rights as girls. That was eye-opening for me, especially the session on preventing violence against girls and gender equality.

It is very important that women and girls have the same opportunities as men and boys. Most men they look down on women because they think there’s a limitation to what women can do. If we can achieve gender equality, then it would be easier to eradicate violence against women and girls. When men get all the opportunities it makes them think they’re entitled to whatever they want.

I think for Tonga, women don’t get the same opportunities as men in rugby due to our culture. In Tongan culture, the women are made to protect their dignity; told how to dress; how to dance; and told that the way they carry themselves is a reflection on her family. Playing rugby goes against all that. So, a lot of people still see women as objects that need to be covered-up,and act respectfully. The other reason I think we don’t get the same opportunities as men in rugby is that we are seen as being weak. That we will hurt ourselves if we play rugby, so we are not given the opportunities as men and boys because we’re seen as weaker.

I have always lived by the mantra “never let fear stop you from doing what you love” I guess that’s why I have always gone against the grain, and why I went against my family’s wishes. I don’t want to not try something because I am afraid my family would stop me or won’t like it. I don’t want to stop trying to be better because I’m afraid people would mock me for how bad I’m playing. If I have any advice for anyone who wants to play rugby or do anything in life but is afraid, it’s that don’t let fear hold you back.