New data from seven countries in the Asia-Pacific region shows that, since the onset of the COVID-19 crisis, more women than men have left their paid jobs to provide essential services to their families, such as cleaning, caring for the sick and home-schooling children. Tighter household budgets also mean that many are experiencing food hardship, while water and fuel are becoming increasingly unaffordable. Furthermore, medical and hygiene products remain unavailable to many, while supply-chain issues and misinformation about vaccines have left more women than men unvaccinated. 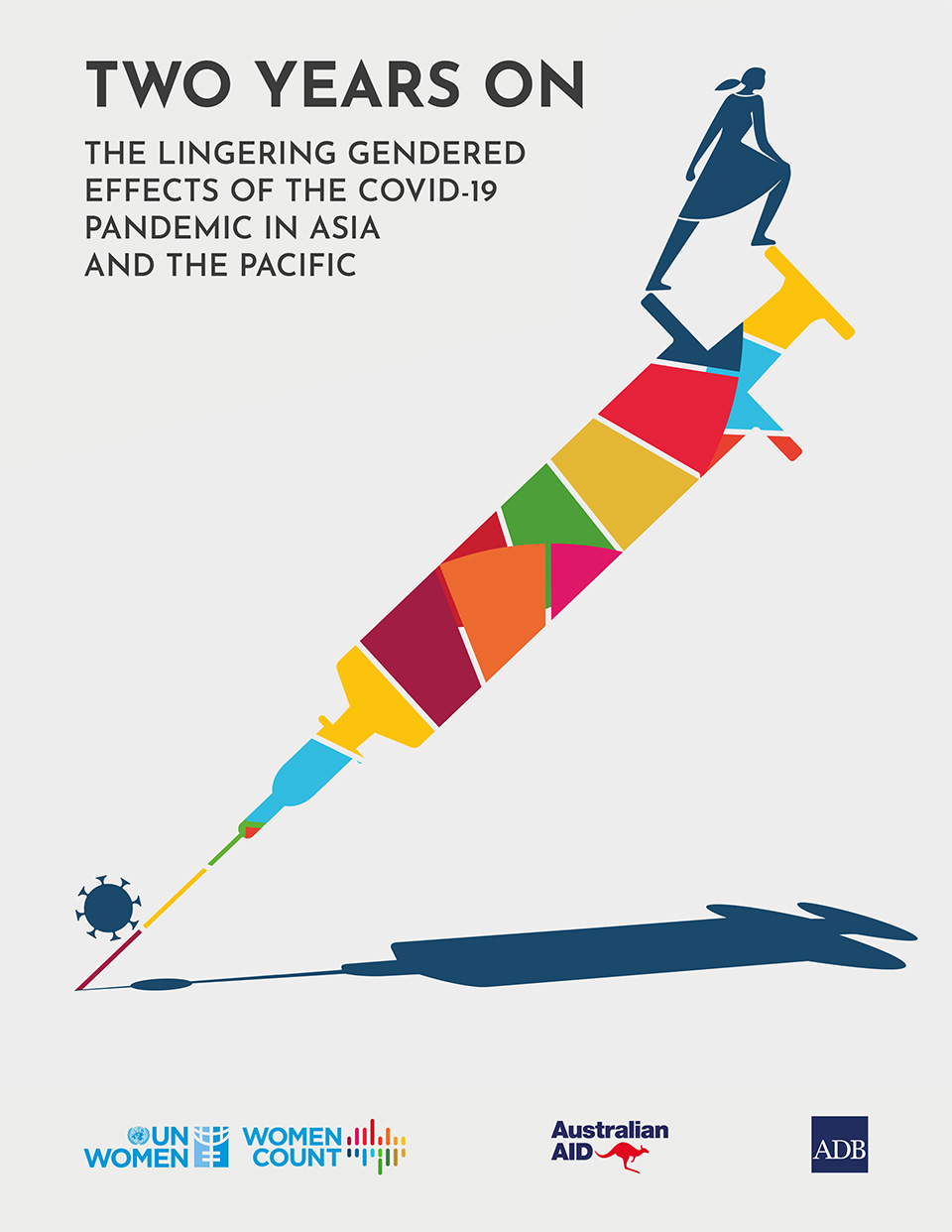 Two years into the COVID-19 pandemic women continue to pay a higher price, including in countries where the virus did not spread widely. A new report showcases that the crisis continues to affect women disproportionately, as shown in all seven countries where data was collected, namely Indonesia, Kiribati, Pakistan, Papua New Guinea, Samoa, Solomon Islands and Tonga. The report, titled Two years on: The lingering gendered effects of the COVID-19 pandemic in Asia and the Pacific, was published today by UN Women and the Asian Development Bank, with the support from the Department of Foreign Affairs and Trade of the Government of Australia.

Findings highlight that COVID-19 vaccination rates differ between women and men in most countries. Across Pacific Island Countries, women have been overall less likely to receive the two doses, citing reasons such as fear of side effects and misinformation about risks associated with pregnancy and breastfeeding. In Indonesia, where vaccination rates are high, more women than men cited limited availability as the key reason holding them from receiving a full course. Across countries, reasons holding men from receiving their second dose mostly had to do with scheduling appointments, time constraints, or location of vaccination centres.

The crisis has also pushed more women out of the labour market, as many had to quit their jobs to tend to family responsibilities. The report notes that this may be contributing to widening gender gaps in poverty, as women have been more likely to lose their income, and were less likely to have one to begin with.

“We knew that domestic and care workloads had increased with the pandemic,” said Sarah Knibbs, Officer-in-Charge for UN Women Asia and the Pacific. “But this data shows that women, who were already carrying most of these burdens two years ago, have taken on the bulk of the increase as well. Very little redistribution of tasks seems to have taken place within households, and that has left many women vulnerable from an income and from an agency point of view.”

Job and income losses are also affecting people’s ability to access sufficient and nutritious food. Since the onset of the COVID-19 pandemic, food hardship has worsened in all countries. The new data shows that in Pakistan, Samoa, Solomon Islands and Tonga, women have suffered a greater deterioration in food security than men.

Across all seven countries studied, the pandemic has coincided with severe weather and other natural hazards. Cyclones, floods, droughts, landslides and other events are further straining the capacity of women and men to cope with the challenges brought about by the pandemic. Almost a quarter of the population in Kiribati has been without power since the beginning of the pandemic, while in Pakistan, Papua New Guinea and Solomon Islands the figures range between 15 and 19 per cent, excluding those who lost power but have since had it restored. The gendered consequences associated with lack of access to power range from women’s safety at night, to increased unpaid domestic burdens for cooking, washing clothes or cleaning, which are activities typically performed by women.

In response to the pandemic, many governments have set up programmes to provide financial support, medical supplies, agricultural products, subsidies and stimulus packages to people and businesses. However, access to these benefits has been limited, with gender differences in some cases. The report indicates that, across countries, people with lower levels of education have been more likely to access such programmes, as these grants targeted the most disadvantaged population groups.

“The Rapid Gender Assessment data points to how economic resilience programmes that integrated gender-responsive designs and targets led to better development results for women and girls who were left the most vulnerable by the pandemic,” said Samantha Hung, Chief of Gender Equality Thematic Group at the Asian Development Bank. “Moving forward, the Asian Development Bank, along with its public and private-sector partners, must ensure that gender data is fully integrated into post-pandemic policies, from design to implementation and monitoring, in order to ensure that women and girls are front and centre of inclusive recovery across Asia and the Pacific.”

Note to the Editor:

Here are some key findings from the report and data. Please view the infographics and other products.

Women are bearing a greater burden of the long-term impacts of the Covid-19 pandemic, two years after it was first declared. Many of these impacts are due more to the economic crisis and restrictions imposed than to the disease itself. These were the results of a study conducted across seven Asia-Pacific countries, namely Indonesia, Kiribati, Pakistan, Papua New Guinea, Samoa, Solomon Islands and Tonga, led by UN Women in collaboration with the Asian Development Bank (ADB), with the support of Australia’s DFAT.

UN Women is the United Nations entity dedicated to gender equality and the empowerment of women. A global champion for women and girls, UN Women was established to accelerate progress on meeting their needs worldwide.

The Asian Development Bank is committed to achieving a prosperous, inclusive, resilient, and sustainable Asia and the Pacific, while sustaining its efforts to eradicate extreme poverty. Established in 1966, it is owned by 68 member countries — 49 from the region.