Safer spaces and better markets in the Pacific islands

Honaria’s central market in the Solomon Islands was dirty, crowded, and well known for petty crime and harassment – particularly for its mainly-women vendors.  For many, making it “women friendly” was a lost cause.

Yet despite critics and detractors, a woman leader was appointed as market manager for the first time, on the recommendation of UN Women. By organising the largely female body of vendors and helping them to identify their problems and needs, the manager, Ms. Martha Horawipu, has been credited with bringing its users a safer, healthier and more united workspace.

In the largest agriculture-based countries of the Pacific region – Papua New Guinea, the Solomons, Vanuatu and Fiji – women market vendors have long been keeping their families and communities afloat. Here, selling fresh food is often the only way to earn cash incomes, and the vendors, 80-90 per cent of whom are women, power an industry with high financial turnovers.

Yet such women battle invisibility and personal risk in their workplaces. Market vendors work an average of 10 hours a day and those from rural areas may spend two to three days onsite. They often sleep under open skies, falling victim to harassment, extortion, sexual violence and ill health.

They work without basic amenities like toilets, shelter, water or cooking facilities, despite paying a daily market tax. Many of the women sellers maintain this tiring work routine despite social upheaval and natural disaster, and while pregnant and nursing. And until now, they have been given little say in how these markets are run. 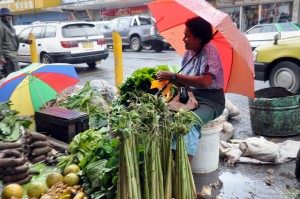 By partnering with governments and organizations of market vendors in ­ Pacific countries, UN Women is working to make market spaces safer and better-suited to their female vendors.

With its Partnership to Improve Markets project, the organization has surveyed, analysed and documented the situation faced by  women market vendors, and recommended changes for by-laws and budgets plans. By partnering with the vendors to do so, it has built their capacities for advocacy, business and leadership.

“Women market vendors support their communities and governments as much as their individual families, and they should be supported in return,” said Elizabeth Cox, Chief Technical Advisor, UN Women’s Pacific sub-regional office. “The markets are a special social, cultural space, and they feed towns, supply local restaurants and through taxes are a very important source of local government revenue.”

In Honaira for example, UN Women is assisting Ms. Horawipu, her colleagues in the City Hall and several thousand women vendors to make gender-responsive changes to the management of the capital’s main markets. By showing women’s effective leadership and action, this will tackle traditional mindsets about women’s participation as the city develops.

The authorities in Vanuatu’s Shefa Province have also become local pioneers in this field, since committing to the Millennium Development Goals and the Convention for the Elimination of Discrimination Against Women.

A portion of the provincial budget had been earmarked to develop market models that promote women in leadership and management roles. 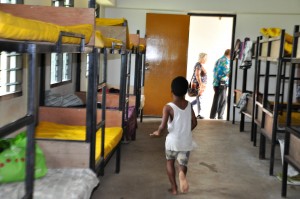 With the support of UN Women, these models are allowing women vendors to drive the diversification of products, customers, market locations and management structures. Other provinces have expressed an interest in using this model in their markets, with plans to do so gradually over the next three years.

Meanwhile in Fiji, where many markets were devastated by recent floods, eight municipalities are working with women vendor leaders, with the guidance of UN Women and the UNDP.

One town, Ba, has been the first to build a market suited to women, with kitchens, toilets, showers, and safe low-cost places for women vendors and their children to sleep. A learning and handicraft centre is helping to train and diversify traders’ skills and increase their incomes, along with a gender-responsive Cash for Work scheme.

Other such projects are on their way throughout the island state.By protecting the dignity, safety and security that women market vendors have so far been denied, these initiatives represent an empowering new start, and recognition that the health and safety of women at work is everybody’s business.