Press release: UN Women launches Markets for Change for safety and better earnings for women in the Pacific

(Suva, Fiji) - Vendors and management at marketplaces across Fiji, Solomon Islands and Vanuatu are set to benefit from a new project that will inject almost US$11 million into ensuring they provide safe, inclusive and non-discriminatory working environments.

The Markets for Change (M4C) project, which officially launched at Suva Municipal Market on Tuesday, 29 April 2014 is a key component of the Women’s Economic Empowerment programme at UN Women in the Pacific. The project’s goal is to ensure that marketplaces in rural and urban areas in Fiji, Solomon Islands, and Vanuatu are safe, inclusive and non-discriminatory, promoting gender equality and women’s empowerment. 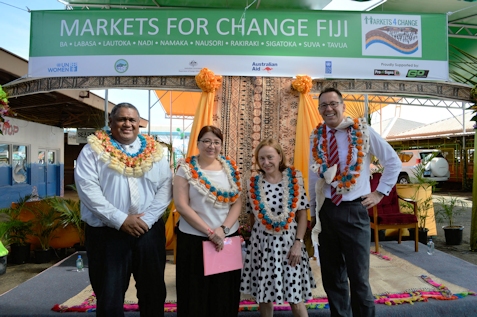 The bulk of the funding for the six-year, multi-country initiative has been provided by the Australian Government’s Department of Foreign Affairs and Trade, with US$4.6 million earmarked for Fiji, US$2.9 million for Vanuatu and $2.5 million for Solomon Islands. Launch events are also planned for Solomon Islands and Vanuatu over the next two months.

Marketplaces are key sites for economic activity in Pacific Island countries and territories and while they may initially seem small-scale, they are not only central to the livelihoods of many households, they also make a significant contribution to individual countries’ gross domestic product.

Vendors, especially women, face numerous day-to-day challenges in their workplaces – the hours are long, the profits are low and violence against women is widely reported.

Between 75 per cent and 90 per cent of vendors working at Pacific marketplaces are women and their earnings often make up a significant portion of the incomes of many poor households. Despite this, women are often excluded from market governance and decision-making.

All of this means that markets are a particularly effective environment for improving women’s economic empowerment and reducing national poverty.

M4C works with stakeholders, service providers and the market vendors themselves to: build and support inclusive, effective and representative advocacy groups; deliver appropriate services, training and interventions; ensure women’s voices are heard and taken into account at the decision-making level; and to improve physical infrastructure and operating systems.

The UN Women Representative at the Fiji Multi-Country Office, Elzira Sagynbaeva, says the potential for change is exciting.

“A small infrastructure project like a roof extension may seem insignificant, but it represents the pebble that starts a ripple effect. It not only protects the market vendors themselves from weather extremes and some of the associated health risks, but also protects their stock, which in turn increases their earning potential. This provides long-term benefits for their families and their communities. And infrastructure is just one part of the M4C approach.”

Ms Sagynbaeva also points out that the project is a great platform for supporting multi-partner initiatives, bringing together local authorities, communities, rural and urban women, civil society organisations, UN agencies and the private sector in an effort to improve the market environment for everyone who uses it, but particularly for women.

“Marketplaces link the community to the national and regional economy through numerous trade modalities. Getting the balance right and ensuring everyone’s full participation – women included – is vital for a healthy economy. Australia supports women’s economic empowerment, recognizing that when women can actively participate in the economy, including the formal labour market, we all prosper.”

The Permanent Secretary for Local Government, Urban Development, Housing and Environment, Samuela Namosimalua spoke at the Fiji launch and pointed out that women are often catalysts for change.

“Evidence suggests that where women have a strong presence in local communities, they are likely to use their weight to prioritize investments in areas that are so critical to human health and development.

The current M4C project builds on experience gained through the Partners Improving Markets series of pilot projects implemented from 2009-2012, as well as local initiatives and entry points for change identified in country-specific initiatives.

UN Resident Coordinator Osnat Lubrani recently revisited the site of one of these original pilot projects in Rakiraki and was inspired by the changes that had taken place.

“I met women vendors who showed me a record-keeping method that they had developed together to keep track of produce and daily earnings and I think that is one of the great things about this project – it’s the partnership aspect. It’s not about international agencies doing things alone.”

UN Women is now rolling out a workshop based on their “Getting Started Toolkit”, which aims to help market vendors organize themselves in order to work together, identify their priorities and take action to effect positive changes within their marketplaces.

This programme is one of the four key programmes for UN Women in the Pacific, recognizing the role that economic empowerment plays in achieving gender equality. Participating in economic activities allows women to effect positive changes not only in their own lives but also within their communities, with positive ripple effects for the whole nation. Historically, however, gendered norms, behaviours and social relations have played a big part in disadvantaging women economically. Institutions, systems and structures often restrict women’s economic opportunities, while gendered roles and status can limit women’s voice and choice when it comes to household and community decisions. Women often also have reduced access to education and skills, as well as other resources such as credit and land.

UN Women supports women in reshaping these conditions at both ends of the spectrum – boosting women’s participation in economic policy-making to providing them with practical skills needed to securing sustainable livelihoods.