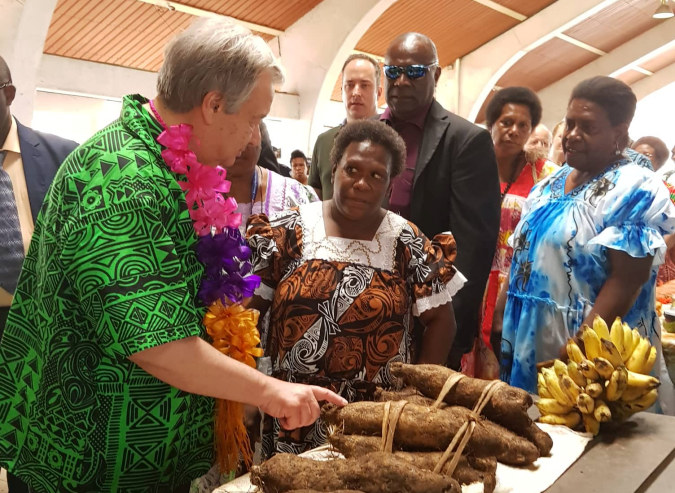 Port Vila, Vanuatu – The impact of climate change has been greatly felt by market vendors who are heavily reliant on their market sales for their income and today members of the Silae Vanua Market Vendors Association (SVMVA) were able to share their experiences of how they are addressing such changes with the United Nations (UN) Secretary-General Antonio Gutterres, at the Port Vila Market, during his first official visit to Vanuatu.

Honourable Peter Yamack, the Acting Lord Mayor of Port Vila greeted the Secretary-General where he also met other dignitaries including Government representatives, the Diplomatic Corps including UN Women Representative, Sandra Bernklau, before he began his tour of the market, guided by Rachel Merang, the SVMVA President.

UN Women’s Markets for Change Project works closely with market vendors in Vanuatu, and across the Pacific towards safe, inclusive and non-discriminatory market spaces, promoting gender equality and women’s economic empowerment which strengthens resilience for both beneficiaries and their families and communities.

Port Vila market accommodates vendors from urban and rural areas and we are proud that the market vendors have started putting into practice what they’ve learnt from the trainings provided under the Markets for Change Project,” Hon.Yamack said.

“The market vendors were able to discuss how they’ve improved their management of market businesses, adapt climate smart agricultural practices, diversify and start new businesses. We can see that they are slowly adapting to changes in their environment and preparing themselves for good and bad times, so they have sustainable income flows to support their families.” 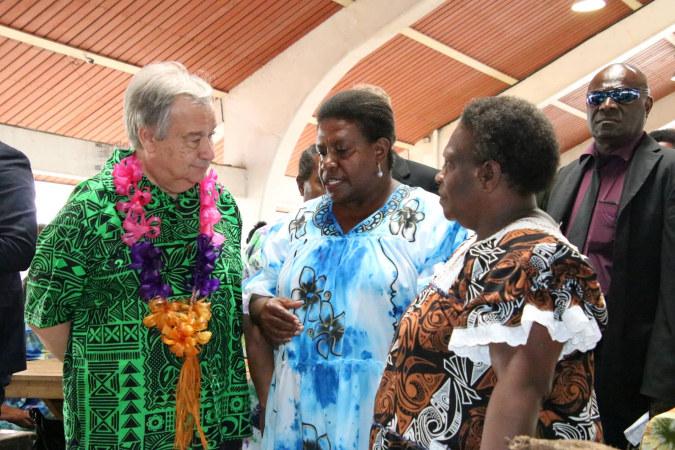 The Secretary-General’s tour of the market allowed him some time to have brief discussions with market vendors who spoke of their personal experiences regards resilience to climate change through the Markets for Change (M4C) Project.

Through organised groups such as the Market Vendors Associations, rural women’s voices are collectively powerful in terms of influencing local decision-making process and in terms of having a platform through which they can support each other. Having an organised and strong market vendor association means that market vendors are better supported and prepared for building resilience to disasters and climate change.  Market vendors in Vanuatu have Disaster Preparedness and Action plans for each market place.

Apart from Ms Merang who spoke about the benefits of having representative bodies like market vendors associations which has provided a platform for women in leadership in the marketplace space, Leisavi Joel and Winnie Douglas also spoke with the Secretary-General on capacity building through the M4C Project that has strengthened their business acumen which has in turn, boosted the resilience of their businesses. The women market vendor farmers for example would now invest in crops or diversify into other businesses to provide for them during rainy or cyclone seasons.

“We never thought we would be involved with someone like the Secretary-General of the United Nations. We are grateful that we were able to share our stories with him during his visit to our country; this has been an experience of a lifetime for me personally and also for us as market association: taking him around today is acknowledgement that we are doing something right,” Ms Joel said.

Food security is an emerging climate change-related issue. The M4C Project has strengthened resilience at a personal level for beneficiaries as agents of change and at a family and/or community level through, for example, agricultural practices and disaster preparedness and management. Beneficiaries are diversifying into new businesses and are increasingly planting crops that are resilient to certain manifestations of the impact of climate change. 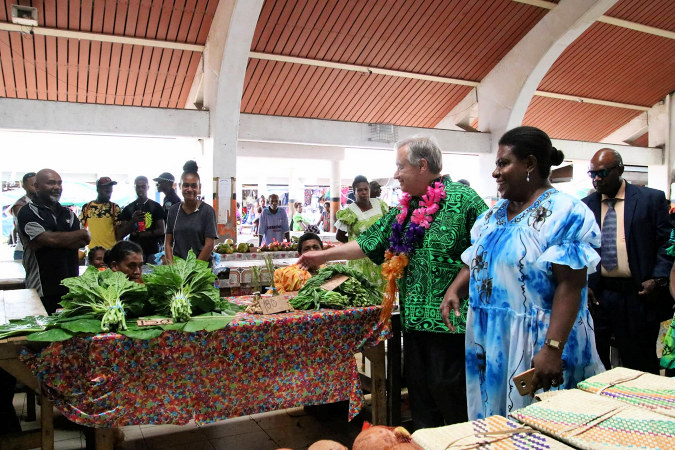 Ms Douglas said to be part of the M4CProject team that facilitated the visit has been life-changing. “Being part of this market tour has really emphasised for us how much we have grown since we started working with the UN Women especially when we think back of where we started and now, we are showing the Secretary-General around our office: it has given me so much more than just the pleasure of being part of the market tour, now I feel like I can do anything.”

Women and girls are disproportionately affected by disasters and are particularly exposed to violence. M4C’s women’s economic empowerment programming means women and girls have some income-generating or financial backing. In partnership with Vanuatu Women’s Center (VWC), M4C Project beneficiaries are indeed better informed and thus prepared for gender-based violence which have the propensity to double during humanitarian periods.

“I’m very proud of the market vendor leaders who represented their members during the UN SG’s visit, to see them confidently share their stories of resilience and economic empowerment and disaster preparedness,” said UN Women Fiji Multi-Country Representative, Sandra Bernklau.

The Secretary-General visited Vanuatu after Fiji and Tuvalu. His tour of the Pacific is in preparation for the upcoming global conference of world leaders on climate change in New York, United States of America, in September.

UN Women’s M4C project is a multi-year, multi-country initiative that aims to have marketplaces in rural and urban areas of Fiji, Solomon Islands and Vanuatu that are safe, inclusive and non-discriminatory, promoting gender equality and women’s empowerment. A UN Women project, M4C is principally funded by the Australian Government, and since 2018 the project partnership has expanded to include funding support from the Government of Canada. UNDP is an implementing partner.