Quezon City, Philippines — Metro Manila mayors demonstrated leadership in urban safety today at the SAFE CITIES METRO MANILA MAYORS CONFERENCE: “Leading in Urban Safety and Protection of Women and Girls from Sexual Harassment and Violence in Public Spaces”, held at Novotel Manila in Quezon City, which was co- convened by the Quezon City Local Government and the United Nations Entity for Gender Equality and Women’s Empowerment (UN Women) Safe Cities Programme. Fifteen out of the sixteen local government units (LGU) invited were represented at the conference. 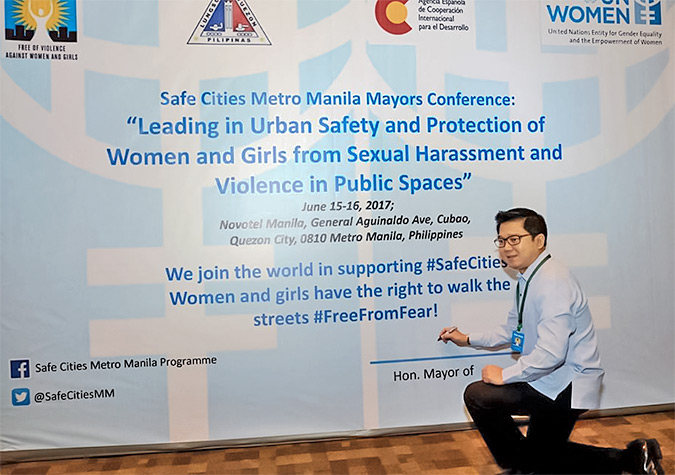 At the kick-off of the 2-day conference, Quezon City Mayor Herbert Bautista highlighted the importance of integrating women’s safety in urban planning and development, “Smart cities are safe cities; and we cannot claim to be a safe city if women and girls are not free from all forms of sexual violence in public spaces, this includes verbal, gestural and physical sexual harassment as well.”

Mayor Bautista has been a strong Safe Cities advocate since 2010, and QC is the first city in the Philippines to join the UN Women’s global flagship programme “Safe Cities and Safe Public Spaces” in 2015. Worldwide, there are 26 cities already included in the programme which works on fulfilling women’s and girls’ rights to move freely and safely in urban cities through city-led policies and evidence-based project development. Furthermore, the programme also encourages men and boys to be part of the change needed to reform the culture that tolerated sexually harassing women in public spaces.

The Safe Cities Metro Manila (SCMM) Programme’s main aim is to develop and effectively implement comprehensive laws and policies to prevent and respond to sexual harassment and violence against women and girls (SVAWG) in public spaces. SCMM started in April 2015 and concluded Phase 1 in August 2016 after successfully piloting it in Quezon City and raising awareness on the issue at the national level – sparking discussions on national TV programs, social media and even in the Senate – challenging the previous misconception that harassing women in public places is acceptable.

With additional support from the Spanish Agency for International Development Cooperation (AECID) for Phase 2 of this programme, SCMM aims to extend its implementation to the other 16 LGUs in Metro Manila, and this conference is a first step to promote replication and scale up of Safe Cities strategies and good practices to improve women’s safety in urban public places, through the leadership of the cities’ respective Mayor’s offices.

Senator Risa Hontiveros-Baraquel, current chair of the Senate Committee on Women, also graced the opening of the conference to discuss how Safe Cities promotes an important governance issue and took the opportunity to highlight the Senate Bill she filed on preventing sexual harassment in public spaces (SHIPS) and other forms of sexual violence against women and girls (SVAWG).

The Key Note message was given by Ambassador Luis Antonio Calvo Castaño, the Spanish Ambassador to the Philippines, Palau,Micronesia and the Marshall Islands supporting the conference goal of sharing and discussing evidence-based approaches, practices and lessons learned to expand support for safe cities and safe public spaces for women and girls all over Metro Manila.

Quezon City’s Safe Cities programme strategies – including trailblazing local legislation, community engagement, and public awareness campaigns – have become a successful model worthy of being replicated and adapted all over Metro Manila. It was cited and praised at the UN Women Global Forum on Safe Cities and Safe Public Spaces attended by over 200 stakeholders from around 26 countries in Mexico City last February 2017, wherein the QC City Administrator Aldrin Cuña, MNSA presented the city’s progress. It is hoped that by having an open dialogue amongst Metro Manila mayors, the entire metropolitan will join the ranks of cities such as New York, Sakai, New Delhi, Port Moresby, Kigali, Cairo, Quito, Dublin and many others that have exhibited their commitment to women’s safety in public spaces.

At the day’s closing, the the LGUs expressed their commitment to work on developing Safe Cities programmes to make their respective cities safer for women, working with Quezon City Local Government and UN Women.

Whether due to shame or fear, Filipino women traditionally ignore and keep silent about catcalls, stalking, repeated harassment for their numbers, male public exposure, rubbing or groping inside the MRT/ jeepneys. They also silently bear indecent language being yelled at them by men as they walk by. The Safe Cities Metro Manila Programme is slowly changing public perception of women and girls and reinforcing the message that everyone has the right to enjoy moving about in our cities free from all forms of violence.

For more information about the cities involved and for updates on the Safe Cities Metro Manila Programme, please visit Facebook page Facebook.com/SafeCitiesProgramme.FreeFromFear and Twitter account@SafeCitiesMM, or search #freefromfear.