Vientiane, Lao PDR – A landmark report has revealed that almost a third of women in Lao People’s Democratic Republic have experienced physical violence, sexual violence or emotional abuse at the hands of their partners, in most cases their husbands.

Commissioned by the Government and the United Nations Population Fund (UNFPA), and with the support of UN Women and the World Health Organization, the Lao National Survey on Women's Health and Life Experiences 2014 marks the country’s first-ever national survey on violence against women.

Based on nearly 3,000 interviews with women across the country, the report states that one in seven women have experienced physical or sexual violence from their partners at least once in their lifetime. The majority of women, however, stated that they had experienced such violence multiple times.

"It’s time to break the silence on violence against women and confront this scourge that takes such a heavy toll,” said H.E. Bounsavath Boupha, Vice Minister at the Ministry of Justice and a key member of the Committee of the National Commission for the Advancement of Women. “Almost half the women that reported violence by their husbands did so for the first time for this report, and in doing so they displayed great personal courage. The government, communities and families, including men and boys, must all do their part to challenge the socio-cultural structures and attitudes that lead far too many women to suffer in silence."

One of the interviewers involved in the survey worded the impact of listening to these stories of so many women: "I was personally shocked at the level of violence that the women endured. I never thought that domestic violence would be that severe in Lao PDR, since it is such a peaceful country with strong traditional values and Buddhist beliefs."

Only 1 in 5 women who experienced violence from their spouses turned to local authorities for help, with just 4 per cent reaching out to the police and 3 per cent to health services, the report states.

Nearly half of all women who were physically or sexually abused by their husbands reported frequent physical injuries, and victims of violence are four times more likely to consider suicide.

One woman interviewed for this study spoke for many when she said: “I’m afraid at night he will come and burn down the house, since he’s threatened to do that before. (…) I still go to work as normal and smile and act normally. No one knows how much pain I have inside.”

“We need to get the message out there that violence is not okay, and that we need to talk about this frankly and openly, and support this essential dialogue with evidence and data,” said Frederika Meijer, the UNFPA Representative in Lao PDR. “The report provides a good base of information for more action, more targeted policies, and more coordinated outreach to challenge out of date attitudes to domestic violence in particular.”

“For the first time, Lao PDR has national prevalence data on violence against women, which forms a critical starting point for effective policy implementation. Besides understanding the extent of the problem, we also need to closely monitor the impact of policies and programmes over time, and track budgets and resources allocated to ensure that all women who experience such violence and trauma have optimal access to justice and support services,” said Anna-Karin Jatfors, Deputy Regional Director, in charge of UN Women Asia-Pacific. 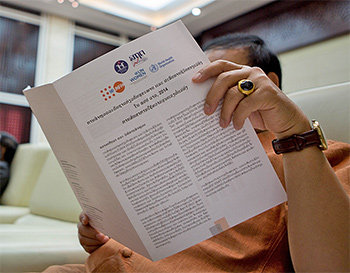 The report includes a series of recommendations for the government, communities and international partners, including fully implementing key existing laws and policies to combat violence against women – with adequate resources made available to do so.

More and better work with communities, men and boys, and in schools is also needed to challenge and transform damaging attitudes from an early age that eventually perpetuate violence against women.

According to the report, 40 per cent of female victims of physical violence from their partners said their children had witnessed this violence at least once. This study confirmed that children living in violent households are more likely to develop serious behavioural problems, including aggressive behaviour, nightmares and weaker academic performance, compared to children in households without violence.

“The report makes it clear that when women dare to talk about violence or abuse against them, even to family members or close friends, they are often blamed themselves or told keep quiet for a mistaken idea of family harmony. This, of course, is true not only in Lao PDR, but across Asia-Pacific and indeed around the world. The report shows us the similarities of human nature everywhere,” said Henriette Jansen, international researcher on violence against women from UNFPA’s Asia and the Pacific Regional Office, who helped shape the survey and similar studies across the region.

“This report highlights the need to focus on violence against women from many perspectives,” noted Kaarina Immonen, the UN Resident Coordinator and UNDP Resident Representative in Lao PDR. “The link between the well-being of women and girls and a country’s development and long-term prospects across a range of indicators, from socio-cultural to economic, has been well-established. The entire UN family in Lao PDR looks forward to working with, and supporting, the government and civil society partners in our collective efforts to achieve the Sustainable Development Goals under which gender equity and women’s rights are a key component.”

“We must acknowledge the Government of Lao PDR for commissioning this crucial report,” concluded Frederika Meijer. “This is not an easy subject for individuals, families and societies to confront and address. We recognize how sensitive this is, and commend the spirit of openness, cooperation and willingness to tackle a long-hidden issue. This has the potential to truly strengthen Lao society in the years ahead, and allow all citizens – women and men alike – to live with greater dignity, respecting each other and themselves all the more.”

The report was produced by the Lao National Commission for Advancement of Women and the Lao Statistics Bureau, with support from UNFPA, UN Women, and the World Health Organization (WHO). The Burnet institute, an Australian non-profit organization, organized the qualitative component of the study.

The study forms part of a larger set of actions by the Lao PDR National Commission for the Advancement of Women (NCAW) and the United Nations family to promote the prevention of violence and combat domestic violence against women. 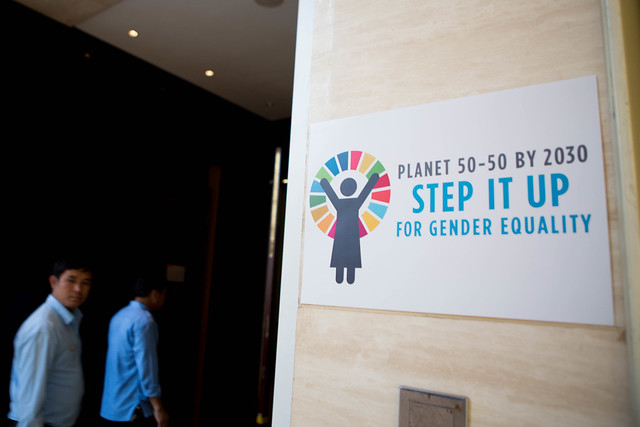 The study team for the 2014 study interviewed 2,997 women between 15 and 64 years old, representing the general population of women of these ages in Lao PDR.

The study adopted the methodology of the World Health Organization Multi-country Study on Women’s Health and Domestic Violence, which occurred from 2000-2005 in 10 countries across a wide geographical spread.

The WHO multi-country study is considered to have established best practices in researching violence against women, by using a thoroughly tested, standard questionnaire and methodology that ensures data gathered in one country can be compared with data gathered in another country across a range of different settings.

Similar studies have taken place in 16 countries across Asia and the Pacific, including Bangladesh, Cambodia, Thailand and Viet Nam, and in many more countries around the world.

Related News
09/12/2020
“It is more important than ever that women migrant workers know where to get help.”
16/04/2019
Empowering the invisible mine victims in Lao PDR
28/11/2018
Lao journalists learn from UN Women how they can help stem violence against women
08/06/2016
UN Women costing evidence improves essential services for women experiencing violence in Indonesia, Lao PDR, Timor-Leste and Viet Nam
27/11/2015
UN Women Regional Director for Asia-Pacific joins campaign against gender based violence in Lao PDR
END_OF_DOCUMENT_TOKEN_TO_BE_REPLACED