Solo, Indonesia — At a hotel in Central Java, a sea of women wearing colorful headscarves and men in traditional Muslim dress are engaged in deep discussion. Working closely by their side are Christian women wearing cross necklaces, men palming prayer beads, and individuals of the traditional Javanese faiths. 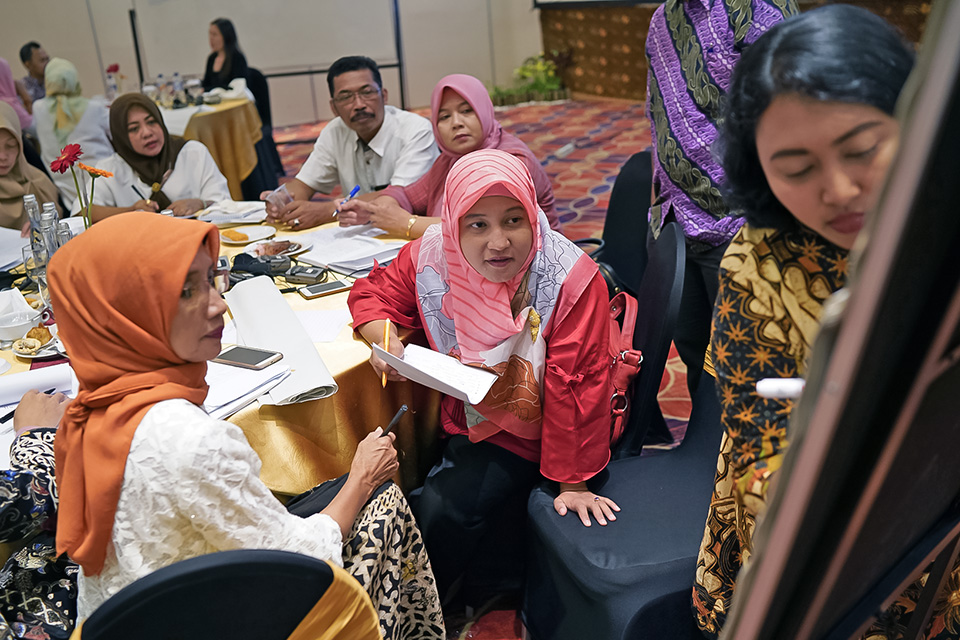 They are village chiefs, stay-at-home parents, small business owners, religious leaders, and local authorities – about 60 community members from around Java, Indonesia’s most populous island, gathered together with one mission: to make their communities more peaceful.

But how to make this happen? For these individuals, the answer came with a local declaration, a little over a year ago to live in peace and harmony with their neighbors, settle conflicts respectfully, and to empower the most marginalized in their communities – especially women – to have a say in decision making.

They called themselves Kampung Damai or Peace Villages.

At the Peace Village Workshop on 9 October 2018, both declared Peace Village members and four communities aspiring to take the pledge came together to create a plan for urging this grassroots movement forward. 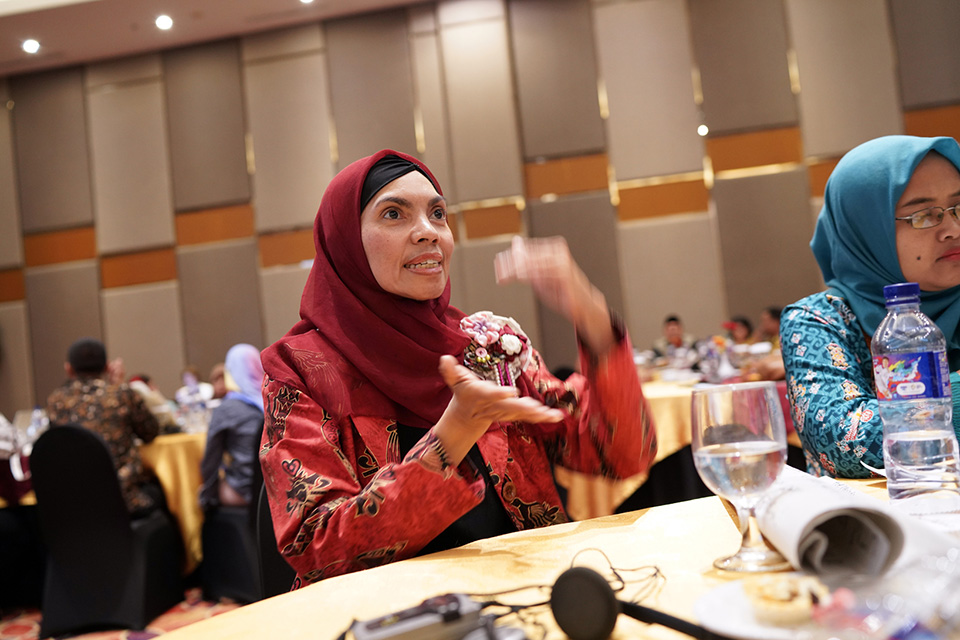 Fifi Salma Safitri from Sidomulyo Village discusses with her village what they deem the most important needs to maintain peace and promote tolerance. Photo: UN Women/Eric Gourlan

The idea of Peace Villages was conceived by UN Women and the Indonesian NGO Wahid Foundation, and implemented under UN Women’s regional programme “Empowered Women, Peaceful Communities”, funded by the government of Japan. In order to become a Peace Village, community members commit to protecting and fostering tolerance and peace within their communities, starting with making peace within the family. They then agree on guidelines for the community. These can include calling for neighbours to jointly clean and fix common buildings; for people of different faiths to set community policies; and for women to be involved in the local economy and decision-making processes.

Presented with the idea, women from each local community lobbied with their village heads and won the support of other community members to implement the idea. Yuli, from Sidomulyo village in East Java, convinced her neighbors to implement the Peace Village plan in her area. She said, “At the beginning, our village leader didn’t really understand what this program is about. We explained that this program embodies values that can transcend all boundaries such as religion, ethnic groups and others.” Eventually, the village leaders came around, and Sidomulyo declared themselves as a Peace Village. 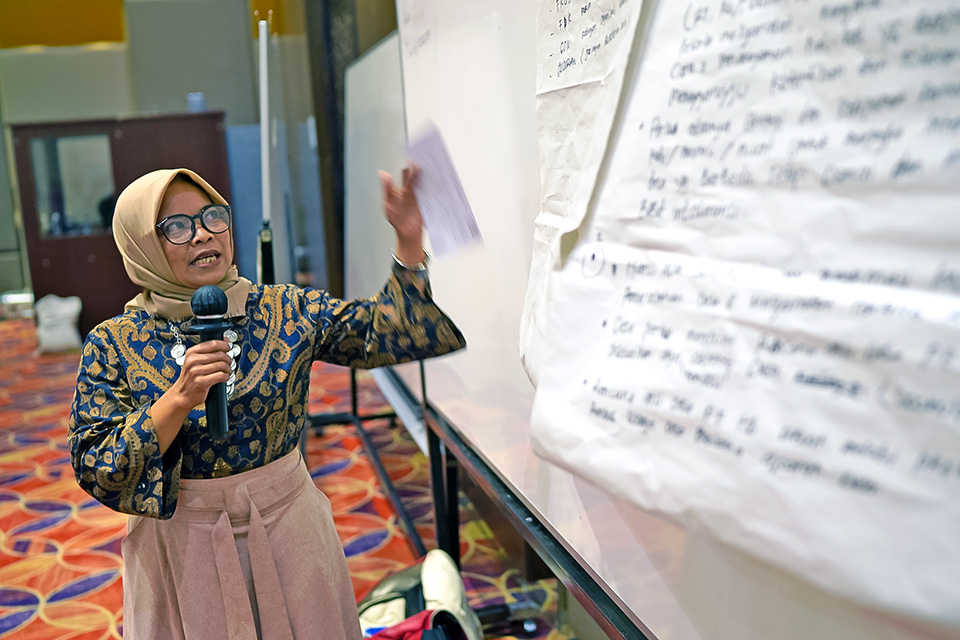 Yuli is a 45-year-old housewife who, through the Empowered Women, Peaceful Communities programme, started a business group with other women from her community. Of women’s role in promoting cohesive societies, she says, “Empowering women to build a peaceful community fits the slogan of our city: empowered village, successful city. For me personally, peace starts from home and community.” Photo: UN Women/Eric Gourlan

The first Peace Village held a declaration on 1 November 2017. Since then, eight more villages have declared themselves as Peace Villages, and the idea has continued to spread. Last fall, Indonesian President Joko Widodo expressed strong support for the Empowered Women Peaceful Communities programme. 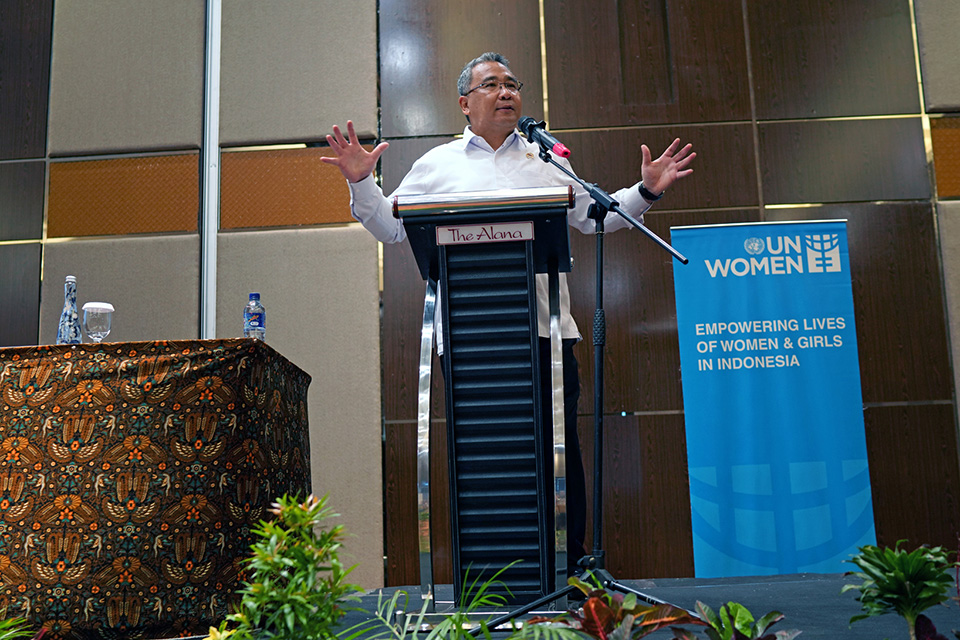 In his keynote address at the workshop, the Minister of Villages, Disadvantaged Regions and Transmigration, Eko Putro Sanjoyo, commended the community members for their work in improving their villages. Sabine Machl, UN Women Indonesia Country Representative, stated, “There are many debates concerning how to foster tolerance and respect towards one another. I believe Indonesia is, and will continue to, set a fantastic example for the rest of the world.”

A key theme of the workshop was women’s pivotal involvement in peacebuilding, especially at the community level, an area where they have traditionally been left out. Sugeng Mulyadi, Chief of Nglinggi Village, said, “If we learn from our history, leaving out women from our struggle will only lead to bigger trouble. We must give more room for women to engage.” 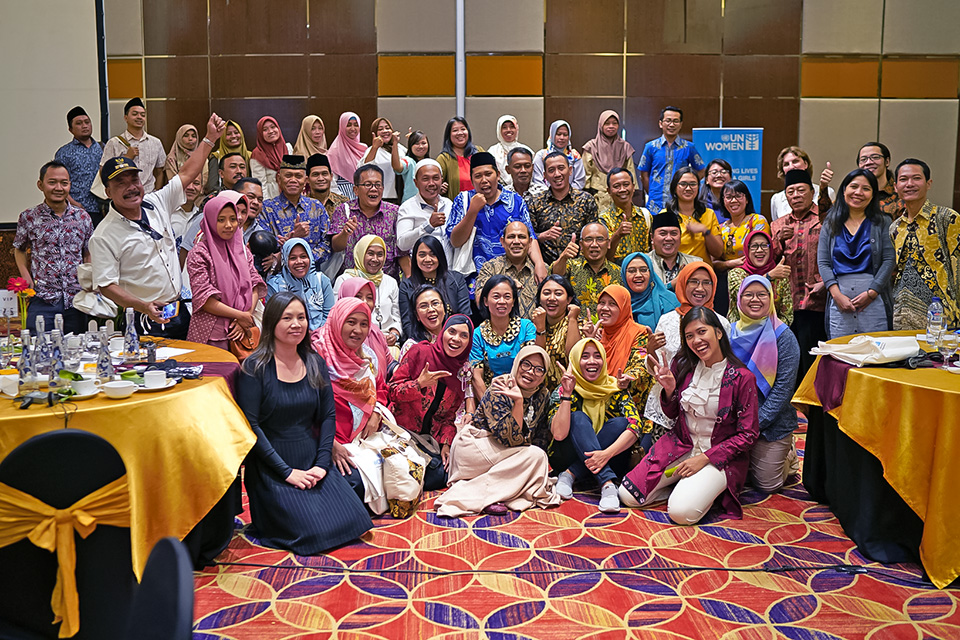 The workshop hosted individuals from all reaches of Java Island, posing here for a group photo. What started as a movement within women's groups now has the support of entire communities. Photo: UN Women/Eric Gourlan

The Empowered Women, Peaceful Communities programme, funded by the Government of Japan, works to empower women in Indonesia, Bangladesh, and the Philippines both economically and to be agents of peace in their communities. For further information, please visit the programme’s page.

Related News
28/07/2022
National Counter Terrorism Agency and UN Women organize dialogue on gender-responsive policymaking to counter extremism in Indonesia
15/07/2022
UN Women works with the Government and civil society on training to protect women and children from conflicts in Aceh, Indonesia
10/05/2022
In an Indonesian province, the people devise a gender-responsive action plan for peace
22/04/2022
Take Five: “Women are more suitable actors in the prevention of terrorism and violent extremism”
11/04/2022
Take five: “We need to strengthen women’s voices, leadership and access to decision-making in promoting peace”
END_OF_DOCUMENT_TOKEN_TO_BE_REPLACED