In Pakistan,less than two per cent of women who experience violence seek help from the police. UN Women has been working with a range of partners to change attitudes and social norms within the police and justice sector, and provide more targeted services for survivors, to ensure that the ability to access essential services becomes the standard, and not the exception, for all women in Pakistan. 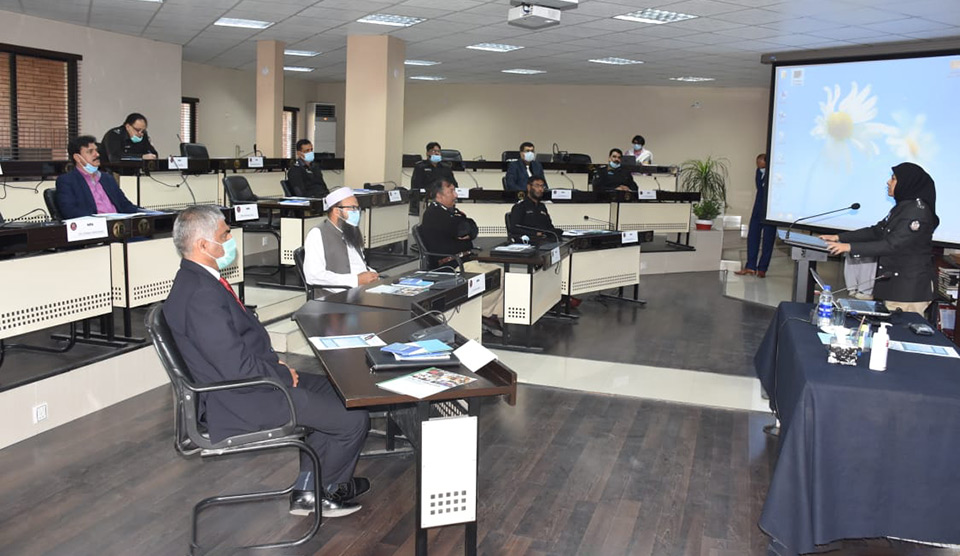 “The biggest challenge we face is that women do not report cases of violence because of victim-blaming attitudes by police officers,” says Maria Mahmood, Superintendent of Police in Pakistan, and Director of the National Police Academy.

“When I started working as a police officer, I was shocked to see the deep-rooted bias of a patriarchal police force. The criminal justice system is discriminatory, and also stigmatizes victims of violence and does not provide efficient support for them,” says Director Mahmood, who joined the Pakistani police force as the country's first female commissioned officer 13 years ago. She has been working to change police responses to gender-based violence ever since.

Since 2017, as part of the UN Joint Global Programme on Essential Services for Women and Girls, UN Women and the UN Office on Drugs and Crime (UNODC) have been assisting Mahmood and the Pakistani police force to better address the needs of women and girls who experience violence. The programme is being implemented by the Government of Pakistan, in partnership with UN Women, the UN Population Fund (UNFPA), UNODC, and the World Health Organization (WHO) and currently funded by the Government of Australia.

In 2019, with funds from the Government of Norway and in collaboration with UNODC, the police in the Punjab Province of Gujrat in Pakistan, opened the Women and Juvenile Facilitation Center. This separate police unit is manned entirely by trained female police officers and is a one-stop shop where women and juveniles who experience violence can access criminal justice services, protection, first aid, psychosocial counselling, rehabilitation and referrals to other essential service providers. 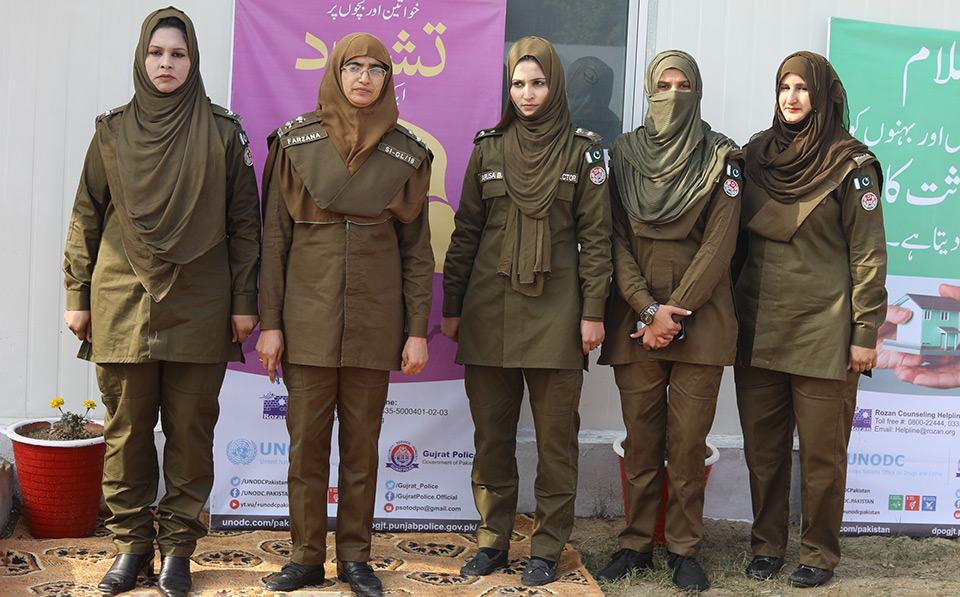 A separate police unit manned entirely by trained female police officers make women feel safer and secure to report violence and access services. Farzana Kausar (second from the left) poses with other officers in front of the Women and Juvenile Facilitation Centre in Gujrat, Pakistan. Photo was taken on 17 December 2019. Photo: UNODC

In a country where women make up only 1.8 per cent of the police force, the visibility of female police officers encourages women to make contact with police. "In Pakistan’s patriarchal society, many women and girls lack education and financial independence. The country's criminal justice system is too complicated and expensive for them to access and fails to take into account their needs. As a result, many women survivors of violence resolve the cases informally, compromising their rights," says Farzana Kausar, a former officer-in-charge at the center.

The female police officers at the center help women and girls navigate complex criminal processes from initial contact, investigations, legal procedures, counselling and referral to other justice services. Information on accessing services through the center is disseminated in the community, and since it opened, the center has received approximately 16 cases of gender-based violence per month.

“I used to believe that girls report their broken relationships as violence against women. I viewed women survivors in such a stereotypical manner that I didn’t give much attention to many cases of gender based violence. UNODC’s training has changed my viewpoints and sensitized me to better address the needs of survivors. Now, I take gender based violence cases as a top priority.”, says Kausar.

While professionally trained female police officers are vital, gender-responsive policing requires that all police officers commit to, and deliver, effective services free of discrimination and bias.

Director Mahmood believes that the biggest hurdle to delivering effective police services is gender stereotypes and harmful social norms. "For example, police tell victims of domestic violence that it is a family matter and try to mediate the case, instead of applying the relevant laws. In a case involving a murder of a girl and a boy, the police assessed the girl's character and moral value. Police work is an extension of our society, and that's why police try to apply societal norms and practices when it comes to gender-related crimes," she says.

In 2020, funded by the U.S. Government, UN Women Pakistan developed the Training Manual on Enhancing Attitudes of Police towards Survivors of Violence Against Women with support from Individualland. This was followed by a training roll-out to over 500 police personnel in five districts of Pakistan. The training enhances police capacity to deliver survivor-centered services in an empathetic and gender-sensitive manner. 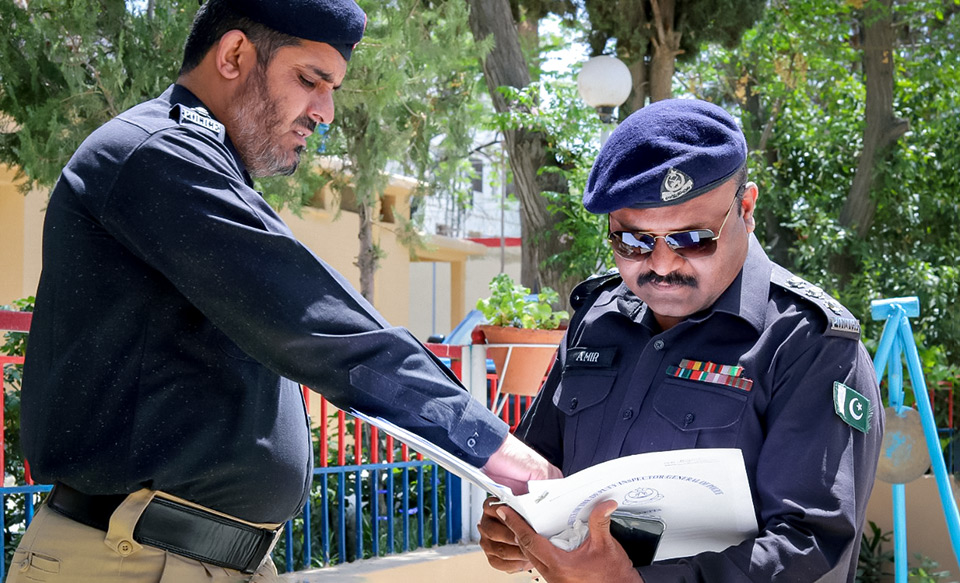 After receiving the UN Women training, Amir Peters (right) is influencing other police officers to handle cases of violence against women without gender bias and victim-blaming. Photo was taken on 12/April/2021 in Quetta, Pakistan. Photo: Individualland/Awais Ahmed

Amir Peters, Deputy Superintendent of Police, received the activity-based training. "I used to think that violence against women should be solved through reconciliation and mediation, as it happens everywhere. Now, I always encourage women who experience violence to access formal justice, just like with any other crimes. The training reminded me of my responsibility as a police officer to be caring and sensitive towards all citizens in our society, especially the most vulnerable and marginalized.”

Supported by UN Women, the National Police Academy is leading efforts to incorporate the training into the academy’s core curriculum. In addition, UN Women, in partnership with UNODC and the International Association of Women Police (IAWP), developed the Handbook on Gender-Responsive Police Services for Women and Girls Subject to Violence. This handbook is being rolled out by UN Women at the National Police Academy, and in 22 countries around the world.

“It is critical to train all officers of all ranks about the importance of being gender sensitive and empathetic when dealing with a woman survivor of violence,” says Director Mahmood. “We see UN Women as a key partner in helping us build the capacity of Pakistani police officers, and any resources on attitudinal change is always a solid addition to our technical resources.”

Related News
24/05/2022
Inspiring Voices from Pakistan
24/06/2021
In the words of Maria Mahmood: “I am proud to be the voice of the voiceless”
28/09/2011
Women peace activists in South Asia send a strong message for peace
16/08/2022
UN Women co-hosts hybrid Forum on developing Viet Nam’s plan on women and peacebuilding
28/07/2022
National Counter Terrorism Agency and UN Women organize dialogue on gender-responsive policymaking to counter extremism in Indonesia
END_OF_DOCUMENT_TOKEN_TO_BE_REPLACED