Women as Active Agents of Peace: Inspiring Voices from Pakistan

Women sell handicrafts on 13 July 2021 at the Peace Café in Thatta city, Pakistan. The café, a women’s gathering place, was established with the support of UN Women. Photo: UN Women/Anam Abbas

“Women and men play a multi-faceted role in peacebuilding. Violent extremism is a phenomenon that impacts everyone and men and women are equally vulnerable to being affected and recruited by extremist ideologies,” says Durr e Maknoon, Director General Outreach of National Counter Terrorism Authority, Pakistan (NACTA). 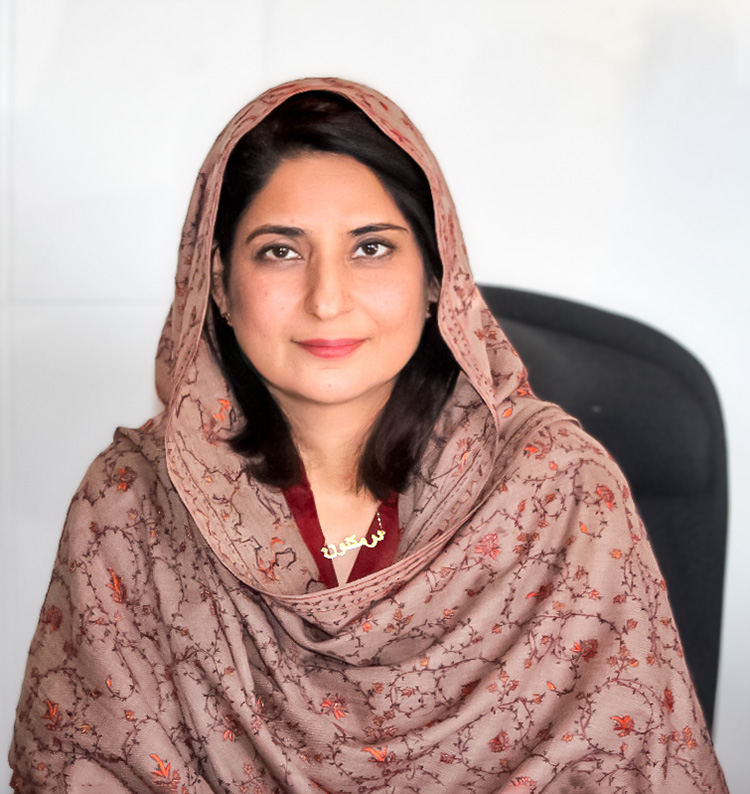 Recognizing this, UN Women Pakistan has partnered with National Counter Terrorism Authority Pakistan (NACTA) to educate government officials on how women can support or challenge extremism, and to promote peace and tolerance among women and youths. NACTA serves as Government of Pakistan’s focal institute to address rising extremism through policy initiatives and engagement of youth and women in particular.

In February-March 2022, UN Women and NACTA jointly ran a national media campaign called Dil Walon ka Des (The Nation of Big-hearted People), to highlight female role models and women’s role in promoting peace. This aspect was particularly important in the context of  Pakistan, women and girls are restricted to the margins of the society, limiting women’s meaningful participation in public and political spheres.

The partnership with NACTA is part of UN Women’s wide-ranging work – in religion, culture, women’s political participation and other fields – to help create a more peaceful society in Pakistan by increasing women’s participation and leadership in the effort.

In a programme funded by the European Union, UN Women Pakistan engaged a diverse group of female faith leaders to promote harmony within and between faiths. Faith leaders are uniquely positioned to influence families and communities and disrupt the narratives of violent extremists.

“There is a lot of misconception [amongst faith leaders] and many of the teachings are taken out of context. As a faith leader and scholar, it is important that teachings are imparted without discrimination,” says Mughisa Khalid, Principal Jamia Darul Islam lilbnat.

This is in line with the Security Council Open Debate on Women, Peace and Security in October 2021 which emphasized on investing in local women peacebuilders to increase women’s participation in peacebuilding. For many faith leaders, this initiative was their first close interaction with women from other faiths. They jointly conducted community engagement sessions in Karachi and also visited each other’s places of worship.

Sister Ghazala, the first female-registered pastor in Sindh province and founder of Pakistan’s first church for transgenders, said the programme “provided me the opportunity to sit together with my fellow faith leaders from different religions to address the societal stigma that … prohibits peaceful coexistence.”

Promoting respect for diversity through sports

UN Women Pakistan has been making use of several avenues — including sports, cultural activities like art, music and theater, and youth exchange programmes — to increase dialogue among diverse communities and to allow youths to express themselves creatively, thus negating the divisive narratives of extremist groups.

On 12 March 2022, UN Women and Soorty Enterprises, a private firm, organized a field hockey tournament that gave female players an opportunity to question stereotypes about people of different ethnicities and backgrounds. More than 120 women and girls from Quetta, Karachi, Mirpurkhas, Lahore and others cities joined the Star’s Women’s Hockey Tournament in Sukkur city.

“We are getting to polish our skills, but also learn so much about each other’s culture,” says Karima, 18, representing the Hazara community from Quetta. “Whether it’s the Sindhi language or a few ‘bhangra’ moves from the Punjabis, or the fact that hospitality is not just a trademark of the Pashtun culture, but Sindhis also – this experience has been eye-opening.”

“We bond over our love for the game. We all come from such different backgrounds and areas. But hockey, and this tournament, has given us a chance to come together on a platform. We are getting to learn from our seniors who are national team players and have also represented Pakistan at the international level,” says Sobia Abbas, 21 from Nawabshah.

Sobia’s response is a testimony to how sports have the power to engage young girls actively and meaningfully. Not only does sports promote team building, but also involves mentoring and building relationships that can help youth, especially women, form a bond with each other. Girls are provided with a platform to become closer to each other and share their experiences, thoughts and learning.

Before the tournament, UN Women arranged for the players to meet with role models including Shanadana Gulzar, Member of the National Assembly of Pakistan, and Muniba Mazari, National Ambassador for UN Women Pakistan. There, many of the players tearfully spoke about their journey. In Pakistan, girls often are discouraged from playing sports.

“There was a lot of resistance from my family initially, and to this day there still exists some tensions,” said Sidra Hakim, one of the players. “It took a lot of convincing and tears but the first person whose consent I was able to gain was my mother. She was instrumental in appeasing concerns from the male members of the family. This just shows how empowered women can influence those around them, and change mindsets.”

Fahim Shad is an anti-extremism activist and film-maker who heads Mehrdar Art and Production along with his sister Parveen Naz. They are based in Lyari, an area of widespread ethnic, political and militant violence fomented by criminal and terrorist syndicates. Lyari has many ethnicities, sects and religious communities and is known for its rich cultural history.

In collaboration with Mehrdar Art and Production, in 2021 UN Women helped female film-makers disseminate short films and documentaries that provided an alternative to the stereotypes used by violent groups by depicting the diversity of communities and of the social and cultural experiences of women in Pakistan.

Shehla Raza, Provincial Minister of Sindh for Women Development, presented a lifetime achievement award to Laal Khatoon and Rozina Naz for their representation of women in the documentaries at the International Women’s Day 2022. Photo: Fahim Shad

“Support of the art of such women not only increases their representation, but also strengthens their role in communities and builds social cohesion in areas where women have largely been marginalized due to extremist elements,” says Fahim.

Masooma Murad, one of the participating filmmakers, said: “Pakistan is usually showcased as a country facing terrorism and violence. However, there is a positive side of Pakistan which usually goes unexplored or untouched – the stories of resilience, of social bonds and of all the hard work of Pakistani women and men are doing.”  The discussion with communities following the screenings highlighted how filmmaking has the power to amplify the voices of women and minorities, and challenge gender stereotypes.

Said another filmmaker, Maria Rafeeq, “If women and girls are stepping out of their homes in the pursuit of their dreams, getting an education or changing the patriarchal mindset, I believe that’s peace in its essence.” 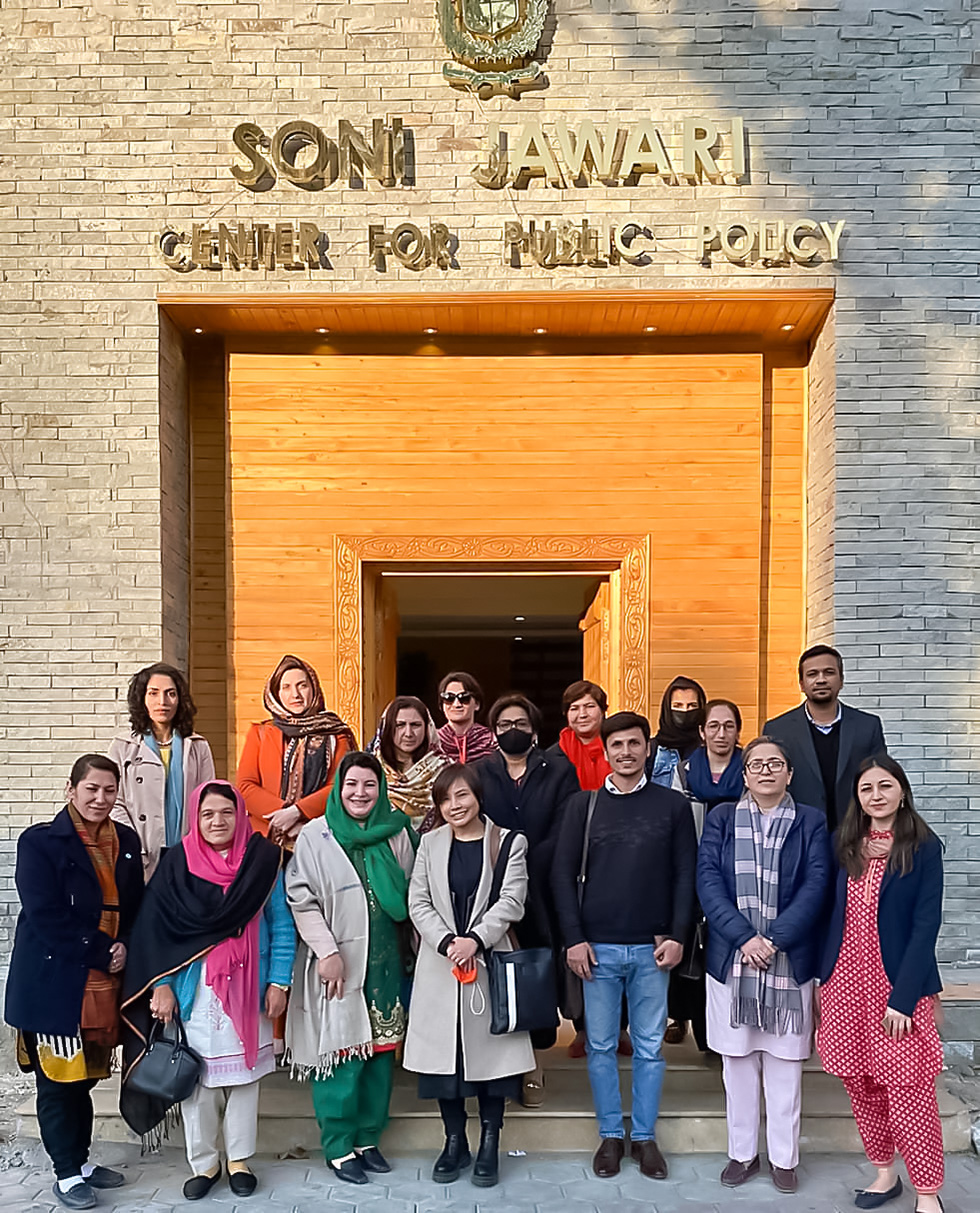 Evidence suggests that enhancing a woman’s income enhances the welfare of her family, as well as her role in decision-making in the household and in the community. Lack of financial autonomy, violation of inheritance rights, exclusion from decision-making processes are all forms of structural violence that promote wider conflict – with more or less similar regional variations.

“An empowered woman is likely to take a leading role in addressing rising conflict, as well as respond to crises situations like the impact of climate change and natural resources,” says Mehnaz Parveen, a consultant who is working with the Government of Gilgit-Baltistan on green initiatives to economically empower women.

Through Soni Jawari, a public policy think tank, UN Women is supporting a women-only marketplace in Gilgit-Baltistan region that would expand market access for women and create a safe space for them to earn incomes.

Gilgit-Baltistan has remained largely peaceful; however, some violence along sectarian lines has been witnessed. “Societal and cultural norms restrict women’s access to basic rights and services, and these inequalities are aggravated in conflict and crisis situations,” says Mehnaz Parveen. “At the basic decision-making forums, we will find that women are missing. A key step forward is to capacitate and empower local women economically and socially.”

The takeover of Taliban in Afghanistan has had ripple effect in Pakistan where it saw an influx of displaced Afghans crossing the borders.

In response, UN Women Pakistan is participating in the Women’s Peace and Humanitarian Fund, a United Nations and civil society partnership, to support local civil society organizations to promote socioeconomic recovery and leadership of Afghan women, including those displaced. The project, to be implemented in Pakistan, Tajikistan and Afghanistan, is also expected to strengthen women’s rights and women-led organizations that help displaced Afghan women and girls.

Through the support of the Government of Norway, UN Women Pakistan has also taken concrete steps to engage women and girls to contribute to and have a greater influence in peace processes by engaging in Track II diplomacy between Afghanistan and Pakistan since 2021. It has fostered regional connectivity by engaging prominent women from civil society organizations from Afghanistan and Pakistan to ensure their experiences of conflict are heard, and their needs are highlighted for humanitarian action. This women to women contact allowed women to establish cross-border linkages, identify acute challenges, learn from each other on effective strategies to adopt in times of conflict and humanitarian crises, and most importantly charter pathways for further collaboration and advocate for peace in the region.

Pakistani women peacekeepers in the audience at the National University of Science and Technology in Islamabad, where Secretary-General António Guterres delivered an address on the topic of peacekeeping. Photo: UN Photo/Mark Garten

Pakistan is the sixth largest contributor to United Nations Peacekeeping forces, and also one of the first country to deploy “female engagement teams” to Congo in 2019.

“Missions led by women peacekeepers are speedy and effective where the focus is on seeking nuanced information from affected individuals and groups and finding local solutions,” says Dr. Farah Naz, Assistant Professor at National University of Sciences & Technology (NUST).

The university’s Centre for International Peace and Stability (CIPS) is the main institute in Pakistan giving pre-deployment training to troops headed for United Nations peacekeeping missions. CIPS and UN Women are partnering to promote the agenda of women peace and security, by building the capacity of troops on gender concerns; do research studies; and advocate for the participation of women in peacekeeping missions.

Dr. Farah said the number of female peacekeepers is growing, and women now make up 7 per cent of Pakistani troops on United Nations peacekeeping missions.

Dr. Farah Naz poses with Pakistani female peacekeepers at the National University of Sciences & Technology in Islamabad, Pakistan, on 15 December 2021. Photo: Courtesy of the University

To implement the Women, Peace and Security Agenda (WPS), UN Women is working at multiple levels to promote women and young people as active agents of peace and stability. As it strengthens its community-led approach spearheaded by local women groups, works in tandem with government institution at a policy level and civil society organizations, it is cognizant of the new and emerging threats from violent extremism, climate change, emergencies like COVID-19, and unprecedented and protracted refugee and humanitarian crises. It continues to build momentum and scale its best practices to ensure women and young people are at the forefront advocating for peace!

Related News
24/06/2021
In the words of Maria Mahmood: “I am proud to be the voice of the voiceless”
24/06/2021
Building trust: Pakistan police address barriers to women's access to criminal justice
28/09/2011
Women peace activists in South Asia send a strong message for peace
23/06/2022
UN Women Pakistan and foodpanda Pakistan collaborate for the promotion of workplace safety
20/06/2022
In the words of Nadesan Suresh
END_OF_DOCUMENT_TOKEN_TO_BE_REPLACED