A Sexual Violence Assessment report (Himrights, 2012) conducted in seven districts of the Mid-West and Far-West Regions of Nepal revealed that one girl in 10 experienced sexual violence. Young girls are victimized physically, sexually and emotionally not only in their workplaces and communities but also in schools and at home. Relatives, friends and teachers tend to be the main perpetrators, with young girls reporting high levels of sexual violence by male friends (23 per cent), school teachers (16 per cent), and relatives and family members (8 per cent). 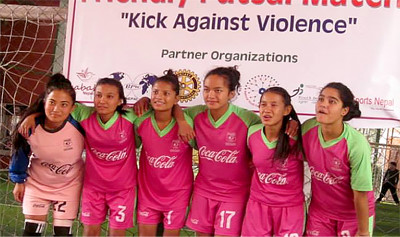 The project implements in schools in three districts of Kathmandu valley: Viz Kathmandu, lalitpur and Bhaktapu. Using a two-fold strategy of football coaching and life skills workshops, the project teaches young girls how to build their protection assets and to take a stance against gender-based violence. The football coaching uses football itself as a tool for empowering girls. By utilizing a sports-based intervention, it is intended that girl students will develop self-confidence to break gender stereotypes and stand up against different forms of gender-based violence. The project also works with teachers, school management and male students to address gender-based violence and make the school environment safer for girls.

In the words of Kamala Thapa: “Put indigenous women and our communities at the centre of climate action”
From where I stand: “Do not wait for others to hand you your rights”
Comprehensive relief package provides support to women and excluded groups during the COVID-19 pandemic in Nepal
Take Five: Continuous advocacy is critical for achieving gender equality in citizenship and ending discrimination against women both in law and practice
Women-managed community kitchens support vulnerable women in Nepal
END_OF_DOCUMENT_TOKEN_TO_BE_REPLACED