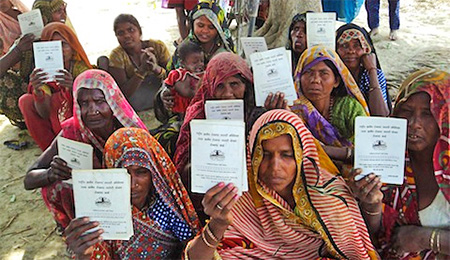 Humsana from Sriramnagar village in Andhra Pradesh (AP) picks tamarind leaves from the forest for a living. Dalit women like her are largely unaware of the Mahatma Gandhi National Rural Employment Guarantee Act (MNREGA), 2005 that guarantees 100 days of paid employment to rural households per year.

Their ignorance is due to their exclusion from society as Dalits have traditionally been regarded as “untouchable”. Scheduled Castes make up 16.23 percent of the Indian population: 80 percent live in rural areas, and more than one-third live below the poverty line.

As a remedial measure, a two-year UN Women programme, with support from the Fund for Gender Equality (FGE), was started in 2009 in eight districts of Uttar Pradesh (UP) and Andhra Pradesh (AP) to increase Dalit’s women’s access to guaranteed wage employment under the Act.

A recent evaluation commissioned by UN Women showed a five-fold increase in the number of Dalit women accessing work under the Act in the 102 selected villages between 2009 and 2011. The numbers increased from 2,811 Dalit women in 2009 to 14,174 in 2011 thanks to the intervention. The programme also increased women’s control over earnings and decision-making. 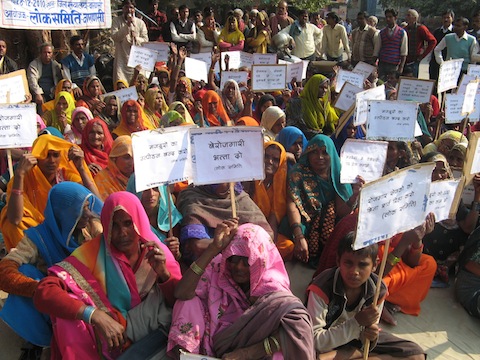 A demonstration condemning unemployment, by Dalit women, with the support of the local organization Lok Samiti. Photo: Lok Samiti

When Humsana heard Aruna, a staff member of DSS, she decided to be involved in increasing awareness about the rights of Dalit women and the Act. “She [referring to Aruna] was a Dalit Stree Shakti staff member, and came frequently to my village to raise awareness about Dalit women’s rights with village women. I realised the relevance of what Aruna had been saying as it concerned my everyday life. I feel like a leader, even amongst men,” she explains.

She became a volunteer after completing training and awareness raising workshops on gender. Humsana now raises awareness about the Act among other women and represents almost 150 families at the Mandal level. Her leadership skills have helped to secure pensions for elderly women and convince officials. “Even the men linger around me in the hope of securing work. My work has helped me gain self-respect and respect from the community,” she says.

In Varanasi District of Uttar Pradesh, one of the partners – Lok Samiti has gone beyond the imperatives of the Act to mobilize and organize Dalit women. They have formed unions to become a political force that can demand work under the Act. Between 2009 and 2011, there was a 95 percent increase in the membership of Dalit women in unions and collectives in the programme target areas enabling them to demand work and serve as a pressure group.

In Chitrakoot District of UP, Vanangana has helped women to form women-only work sites, and create village assets in what was once a male domain. Though it took months for these work sites to be sanctioned by the local government, the breakthrough has helped women to make decisions on the creation of these assets and the management of worksites.

Earlier men in the household controlled the common bank account. This has changed with the creation of over 3,500 bank accounts under the names of Dalit women.

Control over earnings has helped women to take household decisions linked to expenses such as buying food, clothes, and schooling. In some places the money is used also for participation in saving schemes.

“Increased decision-making of Dalit women has occurred at the household and community level, through their say in how their earnings are spent and their participation in the planning of works under the Act. These changes are a manifestation of empowerment and increased self-confidence through the programme,” says Leena Patel, FGE Focal Point, UN Women South Asia.

Through its work, UN Women encourages these changemakers to challenge social stigma at every step of life.

Read more about the Fund for Gender Equality