Solomon Islands Says, "The End Must Be Reached...Women Must Get Elected Into Parliament".

The Solomon Islands despite having no current female members of parliament, is determined to change all that in the upcoming 2014 national elections and preparations are underway to address and effect that.

At the fore front of these process is the inspirational Permanent Secretary of Women, Youth, Children and Family Affairs Ms Ethel Sigimanu, who says, “For the Solomon Islands, our key pressure has been the absence of women in parliament. For the last 30 years, we only had one female Member of Parliament and thus we are working hard to get Government to recognize and be committed to ensuring that in the next general elections in 2014, we have some women representation in parliament,” she said. 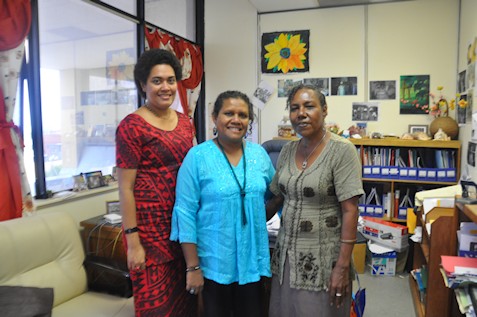 Solomon Islands ratified the Convention on the Elimination of All Forms of Discrimination against Women (CEDAW) in 2002. In 2008, the Temporary Special Measures (TSM) concept was introduced and established by the Solomon Islands government.

TSM is derived under Article 4 of CEDAW whereby it is specifically recognized that in countries where the participation of women is low, TSM may need to be implemented in the short term to advance women’s inequality. The term Temporary Special Measures is used to describe affirmative action for policies, strategies and laws that Governments and Parliaments take to help women become political leaders to meet government’s commitments to CEDAW on equal political participation and representation of women and men.

“In 2009 we got the TSM campaign launched and a TSM proposition was submitted to government for 10 elected reserved seats for women. However there was a split in the political support for TSM. Despite this failure, we weren’t let down. We had made our intentions known, and realized we needed to regroup and re-strategize,” Ms Sigimanu said.

Led by the Ministry of Women, they formed a Committee called the Women in Leadership Working Group, and this later saw the formation of the TSM working Group, who then together, took it upon themselves to refocus and begin an awareness campaign on TSM and why it is important for Solomon Islands.

“When 2010 came, we were quite optimistic that we would successfully get some women in parliament however it was not to be. That was quite challenging to accept after all the hard work and the lobbying, so we chose to approach the Prime Minister’s office to take leadership of the TSM process. Along with the support of the PM’s office which we acquired, we again set about to get Governments support and commitment to TSM, especially to get a legislation which will see the increasing of the current 56 seats in parliament, with a special quota for women leaders,” she said.

Through the Ministry of Women and with support of the Regional Assistance Mission to the Solomon Islands (RAMSI) and the PM’s office, Cabinet last week gave its support to the TSM mandate along with a budget which will now see heightened activities towards the awareness campaigns of ensuring women are represented in parliament in the next elections of 2014.

“To get government to approve a budget for the implementation of the TSM’s agenda was an achievement. However, we are racing against time and want to ensure this funding bears fruit by 2014 where we will see women being elected and represented in parliament, therefore we are prioritizing our work beginning with the various Provinces through the Women Resource Centers to advocate on our behalf,” Ms Sigimanu said.

She acknowledged the assistance and support rendered by Donor Agencies like the United Nations Entity for Gender Equality and the Empowerment of Women ( UN WOMEN) whom without, she says, progress wouldn’t have gotten this far.

Solomon Islands in the meantime will be submitting its initial and second CEDAW state shadow report to the UN Committee on CEDAW next year and they are keen to be able to present some positive steps they are taking towards their commitments to CEDAW.

“Whilst we have yet to get women into parliament, from the Ministry of Women perspective, we are still confident that this calculated process we are on, will soon reap rewards. We have assessed and realize that we need to step up on our role in partnership with the TSM committee. The end maybe not too long to come, and the message we’re giving ourselves is that the end must be reached. Therefore, no stones must be left unturned in the process to get us there,” she said.

(For more information on this story please contact Sainiana Radrodro on sainiana.radrodro@unwomen.org)

Related News
06/05/2021
Developing an inclusive Traditional Governance Bill, leaving no one behind
22/12/2021
In the words of Police Lieutenant Colonel Melbeth Mondaya: “Protection and education for girls is especially important because they are the key to women’s empowerment.”
12/10/2021
Take five: “Afghan women will not go backwards”
16/09/2021
It’s Against God’s and the Nation’s Laws - Sister Doreen Calls for a Stop to Gender-Based Violence
15/06/2021
I am Generation Equality: Bisliya Bhutto, human rights activist, political leader
END_OF_DOCUMENT_TOKEN_TO_BE_REPLACED