Music, dance and more than 500 rural women greeted UN Women Executive Director Phumzile Mlambo-Ngcuka as she entered the Town Hall of Shihore, a village block in the western state of Gujarat, on her second day in India. An “information fair” bringing together local women and their elected leaders, was the backdrop of the event, where community members shared their experiences of using technology to catalyse change. 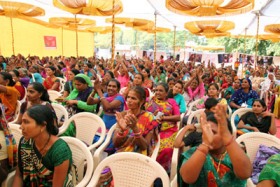 The interactive day-long event was organized as part of the “Making Women’s Voices and Votes Count – An ICT-based Intervention” project. Supported by UN Women’s Fund for Gender Equality, the project enables village women to use information and communication technologies, including mobile technology, SMS, community radio and other means, to document community concerns and map gaps such as lack of public utilities, including lighting, toilets, bus stops and roads. They then use their documentation to advocate with local authorities to effect change. The project has connected more than 800 elected women representatives and recruited a group of “infomediaries” who can potentially reach more than 25,000 households.

Recalling the words of Mahatma Gandhi and commending the efforts of the grassroots women leaders, the UN Women Executive Director underlined the concrete results of the local project, which reverberates at the global level.

“Mahatma Gandhi said without women we cannot be, how profound that is,” said Ms. Mlambo-Ngcuka. “I am glad I came here to see the future. They say women are illiterate. But how can that be when you are doing community radio, when you know what is 99.2 frequency. This is real power.”

At the various information stalls at the event, women leaders showcased the various technologies they are leveraging, such as mobile-based networking, videography, community radio and geographic information systems (GIS), and their learnings. Partners from the project—IT for Change, Kutch Mahila Vikas Sangathan, and Area Networking and Development Initiatives—were present at the event, along with government representatives.

The project, which started in January 2013, brought women who were new to mobile phones and still cameras and got them familiar with technology that they are now rapidly adopting. For instance, they are now using interactive voice response systems (IVRS) and video to record their messages on the challenges they face and then send them to the district and state representatives. Early results from the project show a visible change in the attitudes of men towards gender equality, as well as a greater awareness around social issues such as gender justice, safe childbirth, environment protection, water and sanitation.

The UN Women Executive Director along with Deputy Executive Direct Lakshmi Puri and Rebecca Tavares, Director of the Multi-Country Office in India, were also invited to test the technology and send IVRS messages to the community and to local partners.

“You are tech gurus in the community, and you are bridging the technology gap,” said Ms. Mlambo- Ngcuka in her message to the community. “Each one of you, one by one are bridging the digital divide. It is not a small contribution. You are recreating your identity as women and also building a collective identity,” she said, highlighting the long-term contributions of the women leaders who are also role models for future generations.