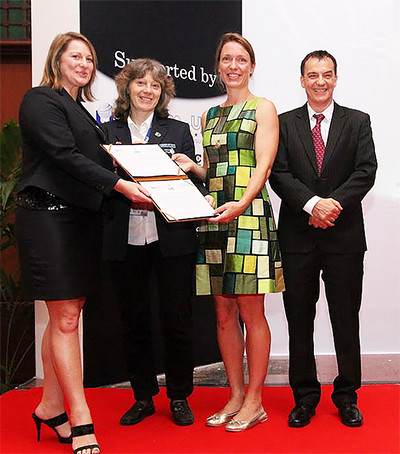 Bangkok, Thailand – Twenty three sport federations from around the world committed to promote gender equality and train coaches and athletes to prevent violence against women and girls.

A joint pledge was signed by the sports groups' representatives and presented to UN Women during the Muaythai Royal World Cup 2015 held in Bangkok last August. The signing ceremony was witnessed by over 400 delegates and sports representatives from around the world.

During the World Cup and AIMS Conference, Twenty-six international Muaythai coaches participated on a consultation to develop a new training package for the prevention of violence against women on sports settings. The session was organized by UN Women Asia Pacific in partnership with IFMA. The package is expected to be finalized and launched by 2016.

In addition, UN Women Asia Pacific presented the Sport Is Your Gang Award to the Mexican Federation of Muaythai at the Night of Olympism on 19 August. The gala saw the participation of over 2,000 Muaythai delegates from around the world as well as representatives of the diplomatic corps in Thailand.

As part of its ongoing efforts to end violence against women, UN Women actively engages with male-dominated sports associations to mobilise men and boys to reject violence and promote healthy and non-violent relationships

Muaythai coaches participate on a consultation to develop a new training package for the prevention of violence against women. Photo: International Federation of Muaythai Amateur (IFMA)/UN Women

Visit UN Women Flickr for more photos. Photo: Photo: International Federation of Muaythai Amateur (IFMA)/UN Women
Related News
08/03/2022
New UN Study says Fear, Violence, and Isolation Prevents Myanmar Women from Accessing Income and Healthcare
15/03/2021
I am Generation Equality: Net Supatravanij, Thai social entrepreneur and activist against gender-based violence
09/12/2020
“It fulfils and motivates me when they say ‘Thank you’, when I see them empowered, knowing where to seek help.”
30/10/2020
From where I stand: “Buddhist and Muslim women are cooperating to support the peace process in Southern Thailand”
15/10/2020
Thai celebrity Cindy Sirinya Bishop campaigning for women’s rights as new UN Women Regional Goodwill Ambassador for Asia and the Pacific
END_OF_DOCUMENT_TOKEN_TO_BE_REPLACED