Phnom Penh, Cambodia — With the support from UN Women, Cambodian lesbian, gay, bisexual, transgender, intersex and queer (LGBTIQ) people and activists have launched an online media platform to promote the rights of their community. 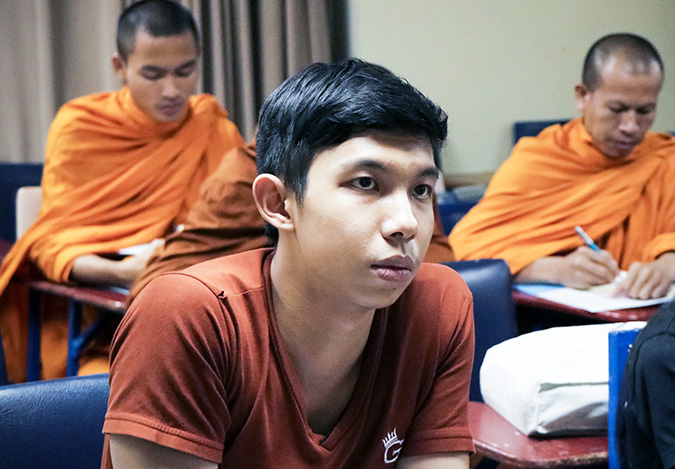 Student Ear Tech,left, listens to a speaker from the LOVELSDIVERSITY team responding to this questions at the media plalform launch at Pannasatra University on 8 June. Photo: UN Women/Sreynich Leng

The platform, dubbed LOVEISDIVERSITY, aims to engage youths, especially students, in increasing society’s acceptance of LGBTIQ people and the profile of LGBTIQ issues. It was launched on 8 June in a ceremony at Pannasastra University of Cambodia in Phnom Penh. The ceremony was a session of Japanese Professor Kasumi Nakagawa’s Gender Studies class; about 180 people attended, mostly students and including some Buddhist monks. 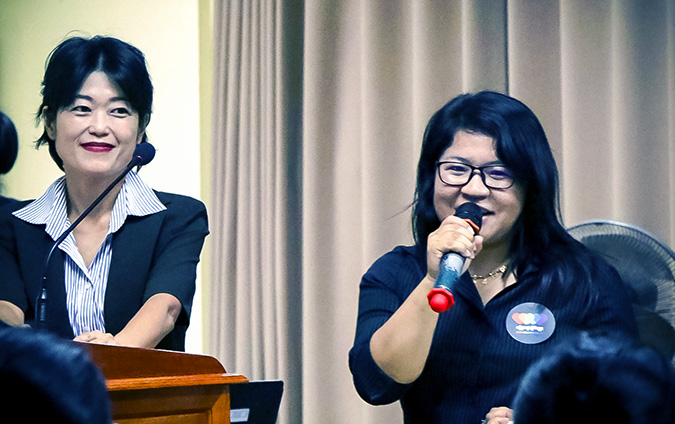 Prof. Kasumi Nakagawa, left, with her interprerter, introduces the LOVEISDIVERSITY team to her students in Gender Studies at Pannasastra University of Cambodia on 8 June. Photo: UN Women/Sreynich Leng

The LOVEISDIVERSITY platform includes Facebook, Twitter, Instagram, YouTube and a website-in-progress. The activists plan to create infographics, posters and educational short films and readings to add to the existing photo and video content. UN Women has been providing financial and technical support for the project. 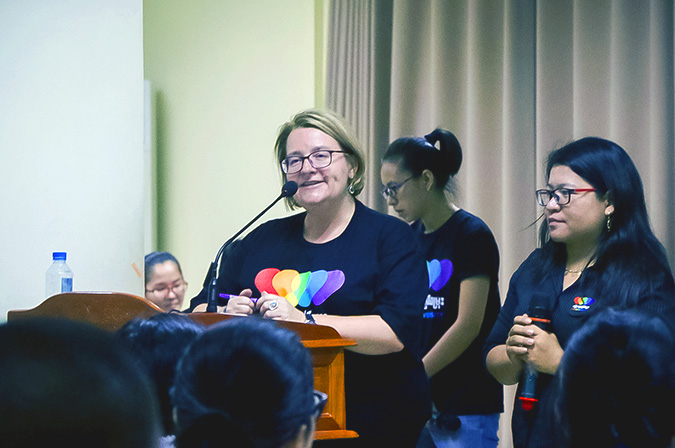 At the ceremony, Prof. Nakagawa thanked the activists for fighting for LGBTIQ rights, and UN Women’s Deputy Country Representative Sarah Knibbs encouraged the students to “learn by heart”. “When I said learn by heart, it simply means we learn from experiences and understanding from others’ sharing,” Knibbs said.

Three of the activists who created the media platform told the audience about LGBTIQ issues and their experiences as LGBTIQ people in Cambodian society.

One of the speakers, who asked to be called Chou, is a 21-year-old law student at Royal University of Law and Economics.

“As you can see, I am a transgender man, so I don’t like dressing up as a woman,” Chou said. “I don’t wear a skirt to class either, so people tend to notice me. One lecturer even said in class that, ‘If you became lawmakers in the future, do not draft any law for those people [LGBTIQ people]’, and one of the lecturers even failed me without any proper reasons.”

After listening to the speakers and watching the launch video, one member of the audience said she now had a broader idea about loving relationships. “I feel a lot of sympathy for LGBTIQ people as they do no harm yet get discriminated against, even by their own family,” another person said. “Love is love. From what I have seen, LGBTIQ people also do good deeds just like other people,” said a monk.

Ear Tech, a 19-year-old Pannasastra University student, said: “This is the very first time I have heard and joined in sharing session about LGBTIQ in Cambodia. If asked if I have experienced or seen LGBTIQ people being discriminated against in Cambodia, I can say it’s commonplace. I am surprised and happy to see this kind of movement and hope that the team will continue to share in other universities.” 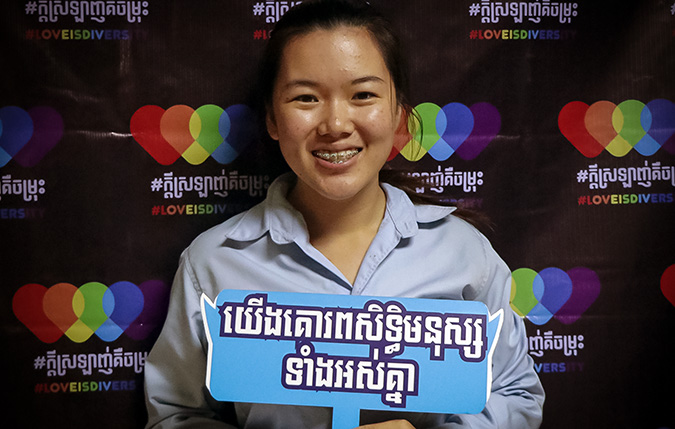 We all respect human rights,” at the LOVEISDIVERSITY media platform launch at Pannasastra University of Cambodia on 8 June. Photo: UN Women/Sreynich Leng

Another student at the university, Srong Seavmey, 21, said: “Some people don’t like LGBTIQ people because they think those people are just influenced by the environment or society these days. I myself didn’t like LGBTIQ people at first, but soon after I got to university and read news, I realized that they are not like what most people say about them.

“If I had children who may become LGBTIQ, I would let them explore themselves first, and I would also see how genuine they are, whether they are LGBTIQ or just following the trend. If they are really LGBTIQ, I will support them because I think people should live their lives and should not think or care too much about what others think of them. Otherwise we will not have happiness in the family.”