Take five: “We would like to see something done about the women workers who are not currently recognized as formal labourers” 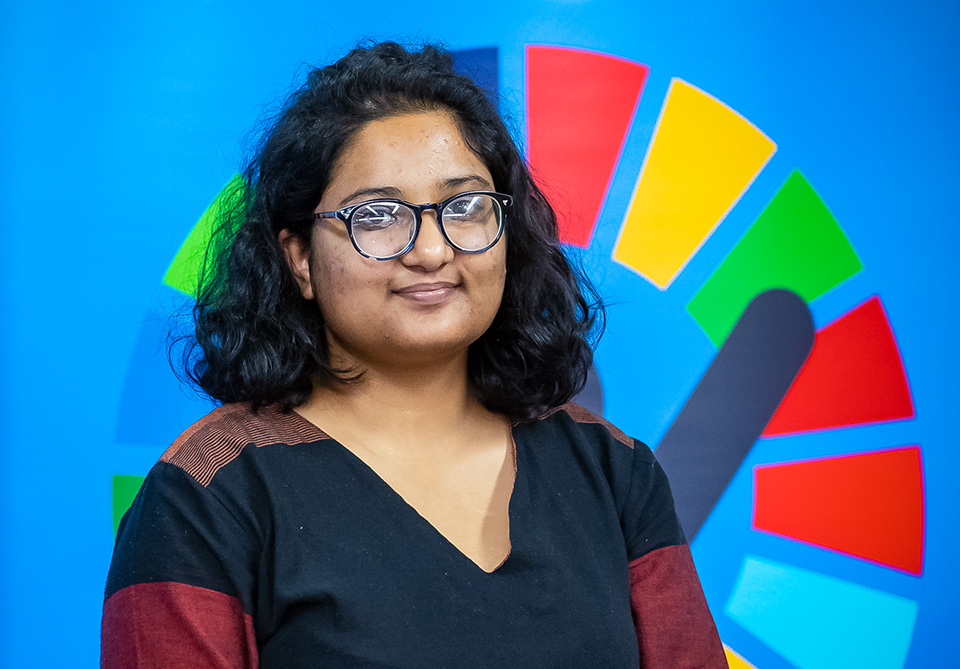 Anisha Luintel is lead researcher at Women Forum for Women in Nepal (WOFOWON). In February 2019, she attended the Regional Civil Society Strategizing Workshop in Bangkok ahead of the 63rd Session of the Commission on the Status of Women and Beijing+25 Review. This year’s CSW is focused on social protection systems, access to public services and sustainable infrastructure. Luintel spoke with UN Women about her organization’s efforts to secure equal rights and social protection for women working in Nepal’s hospitality and entertainment sector, where they often have only informal employment status.

What are the challenges facing women working in Nepal’s hospitality sector?

Nepal’s hospitality and entertainment sector includes dance restaurants, singing or “duet” restaurants, open restaurants, and the smaller snack bars known as cabin restaurants, as well as massage parlours. The workplaces in this sector are sometimes registered and sometimes not, but the women who work there are almost always unregistered.

In researching women who work in the small bars and massage parlours, we spoke to one who said she earned 4,500 rupees per month [USD 40 – and well below the minimum wage is 13,450 rupees per month] but she calculated her living expenses as an internal migrant in Kathmandu to be much higher. Everyone has a right to decent work, but the living wage needs to be within reach of the worker.

What conditions in Nepal are behind this?

Our society is fundamentally based on patriarchal norms, value systems and structures. Society is hesitant to recognize the contribution of women’s work towards the national economy, or to their families’ livelihoods. Women’s sexuality is always in question, not just outside the household, but also within its boundaries.

In the case of massage parlours, the health aspect of massage as a therapy has not been highlighted and is only slowly developing. Because of the wrong perception that massage parlours have only sexual activities, customers feel they can attempt exploitation, abuse or harassment of the workers – especially sexual exploitation. Labour exploitation is also a big problem. Salaries are sometimes as low as 3,000 rupees [USD 28] per month, and often denied altogether by the business owners.

The women and girls working in these sectors often have a background of being displaced during the armed conflict [against the 1996-2006 Maoist insurgency] and the disaster [earthquakes in April and May 2015], or by floods or housefires. These have left many children growing up without one or both parents.

What needs to be done?

The State in Nepal needs to take control over the rapid privatization of services. Otherwise, the increase in the cost of living will squeeze workers more and more. We do have an amended Labour Act [Nepal Labour Act of 2017], and there are provisions to include the informal sectors and their workers. But we have to see how it goes with implementation.

What are you aiming for here at the CSW preparations?

There should be measures taken against occupational discrimination. As this CSW is focused on social protection, we would like to see something done about the women workers who are not currently recognized as formal labourers.

It would certainly be helpful for us if the Nepalese State is part of some commitment during the session in New York in March. Then we can say, as our representation, to fulfil this commitment we now need to move forward.

What does this work mean to you personally?

As a student I was always unsatisfied about the inequalities in the world. I didn’t know back then about access to resources or things like that, but I was not satisfied by what I saw in society around me. As a young researcher on a programme supported by the Asia Pacific Forum on Women, Law and Development (APWLD), I had the opportunity to talk with women workers from so many districts, with so many struggles, and I saw that these women were really powerful. Most were from populations considered vulnerable, but to have lived through all their struggles, starting with their childhood, and to see how they are living now, was a huge inspiration for me.

And for myself, if I cannot move freely outside of my house, if I do not feel that society would accept me if I go to work in a dance bar tomorrow. That’s how my freedom is directly connected to theirs.

Related News
01/10/2020
Statement by the President of Nepal, Right Honourable Mrs. Bidya Devi Bhandari, at the High-level Meeting on the Twenty-Fifth Anniversary of the Fourth World Conference on Women (Beijing+25)
11/08/2014
Progress 20 years on: Beijing+20 reviews are underway
08/09/2022
Take Five Pertti Anttinen
01/06/2022
One Step at a Time
14/03/2022
Women need to be engaged as leaders and agents of change in addressing challenges linked to climate change, the environment and disaster risk reduction
END_OF_DOCUMENT_TOKEN_TO_BE_REPLACED