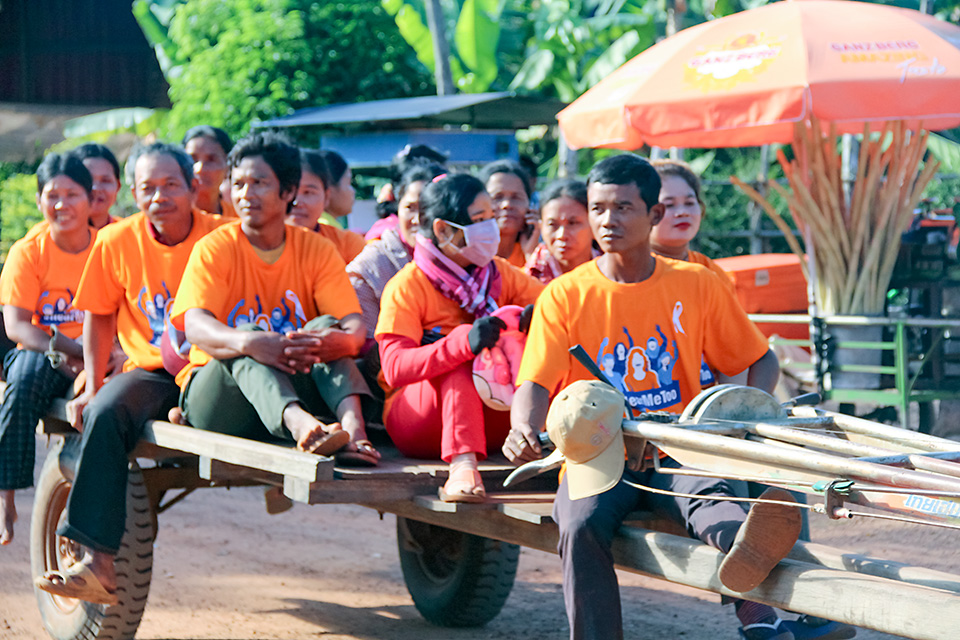 Men on an oxcart join a Government-organized march in Siem Reap, northwestern Cambodia, on 6 December 2018. It was part of the United Nations 16 Days of Activism against Gender-based Violence, for which orange is the theme colour. Photo: UN Women/Vutha Phon

Phnom Penh, Cambodia — As a young man, Vutha Phon was troubled to learn that so many women and girls in his country had suffered from gang rape. Even boys assaulting girls. His mother told him about how in the forced-labour fields of the Khmer Rouge in the 1970s, women were swiftly slaughtered after being raped.

Phon is now putting to work his longstanding commitment to help survivors of violence as an officer overseeing the Cambodia project of the UN joint Global Programme on Essential Services for Women and Girls Subject to Violence.

“We need more men to talk with other men about women’s issues, to change and transform unacceptable practices towards women and to build safe spaces for women, The next generation will learn from our modelling of how to be a good man.”

The programme is a partnership among UN Women and United Nations Population Fund, World Health Organization, United Nations Development Programme and United Nations Office on Drugs and Crime. It cooperates with Cambodia’s Ministry of Women’s Affairs to fill gaps in the provision of quality, coordinated and sensitive services that respond to the multiple needs of survivors of violence in an empowering and safe way. The programme runs from July 2017 to December this year and is funded by Australia’s Department of Foreign Affairs and Trade (DFAT) and Spanish Agency for International Development (AECID).

As part of the Cambodia project, UN Women is supporting training of service providers at the national and subnational levels, on preventing and responding to violence and on gender-responsive jurisprudence.

In a critical aspect of the project, UN Women is training service providers from the health, justice, police and social services sectors to adopt a victim/survivor-centered approach that focuses on the rights, needs and desires of women and girls. Service providers learn to respond to and support survivors’ needs and wishes, whether that be to press charges, seek shelter, or return home. This will create an environment that encourages women to come forward, seek support and report attacks. And it will help stem impunity, sending a strong message that violence is never acceptable.

The Ministry of Women’s Affairs set up a Technical Working Group on Gender-based Violence with UN Women’s support in 2012, to coordinate efforts by the government, civil society groups and international organizations. 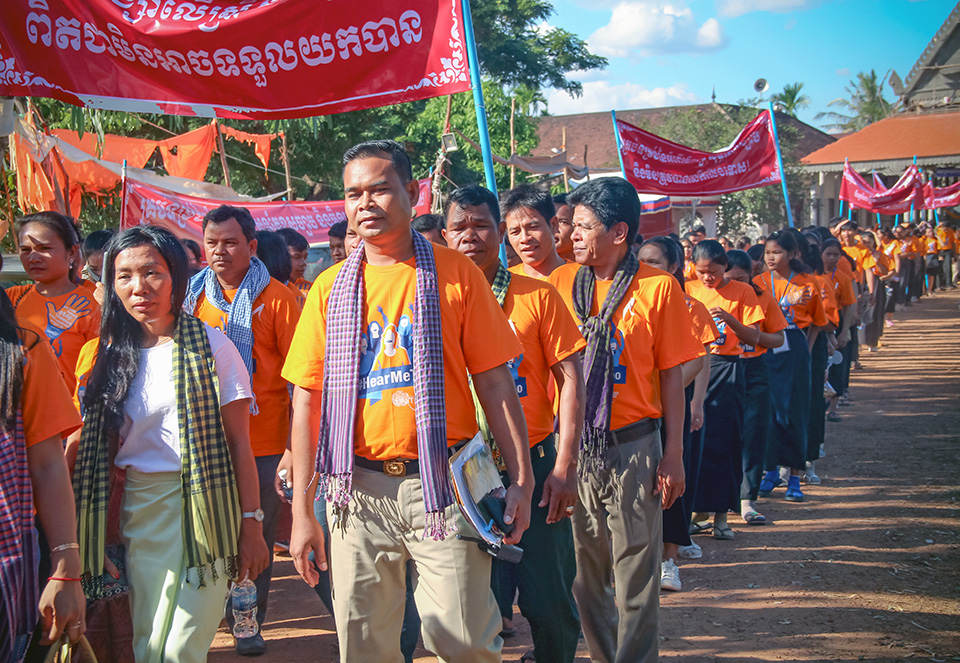 About 300 people including many men march to raise awareness about violence against women, in Siem Reap province of northwestern Cambodia, on 6 December 2018. “Orange the World” was the theme of the global activism campaign for women’s safety and dignity. Photo: UN Women/Vutha Phon

The working group is drafting the third National Action Plan to Prevent Violence against Women, expected to be adopted in September. The plan emphasizes a Stop Sexual Harassment Policy and includes LGBT rights. It seeks to change social attitudes by teaching children and youths how to treat others equitably and peacefully, and parents how to uphold these values in the household.

The working group has produced guidelines for counselling, referrals, mediation, and minimum standards for services to survivors of violence. It also is liaising with the private sector to promote safe work environments and stop sexual harassment of employees in garment factories and other workplaces.

Phon said the working group is now giving priority to changing social attitudes and perceptions on violence against women. The working group’s advocacy led the news media to create a code of ethics for reporting on violence, including avoiding victim-blaming and respecting survivors’ confidentiality. The Ministry of Women’s Affairs has asked the Ministry of Information to call out media outlets that blame victims or make jokes about sexual violence, he said.

With UN Women’s support, the Ministry of Women’s Affairs is doing more documentation of the violence, and the police are improving their response to cases, Phon said. 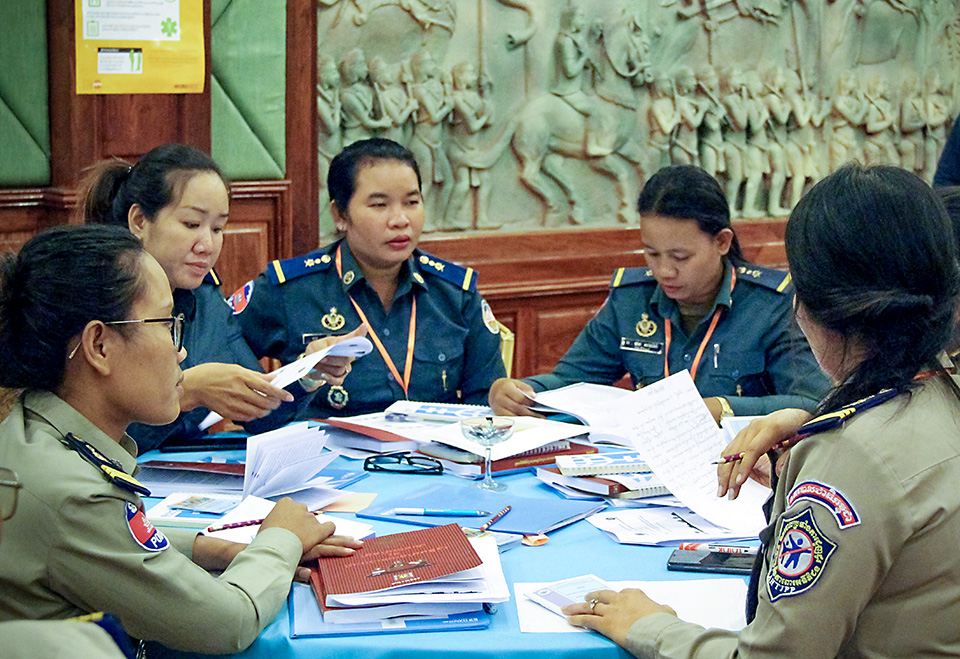 Police officers and gendarmeries participate in a UN Women-organized workshop on identifying and interviewing survivors of gender-based violence and human trafficking. The training was held in 12 provinces of Cambodia in April 2019. Photo: UN Women/Vutha Phon

Such efforts must contend with deep-seated attitudes passed down from one generation to the next. Cambodia’s traditional Chhab Srey, or code for women, prescribes that women defer to their husbands “at all times”. One of its rules, that problems at home should stay at home, hinders women from seeking help and reporting domestic violence.

But there are signs that changes are possible.

A 2013 United Nations multi-country study on men and violence found that men whose parents shared decision-making equally were more likely to do the same in their own relationships — showing that men can learn from observation. The report also said men aged 18–24 had more equitable attitudes towards women than older men did, indicating a positive generational shift.

Phon said Cambodia’s Government and civil society groups vastly increased their budgets for violence-prevention efforts, from USD750,000 in 2015 to USD1.2 million in 2016.

But even more Government funding is needed, Phon said. And more female service providers and police officers in the local communities because women can more sensitively deal with and help survivors, he said.

The country also needs more sensitive men like Phon, women who work with him say.

“We need more men to talk with other men about women’s issues, to change and transform unacceptable practices towards women and to build safe spaces for women,” he said. “The next generation will learn from our modelling of how to be a good man.”

Related News
03/12/2021
“I believe growth in our society can only begin by listening to each other”
02/12/2021
“I believe in the power of storytelling and sharing experiences”
25/11/2021
I want them to gain knowledge about their world, their society and what is right and wrong
10/12/2020
“Solidarity is what we all need, not discrimination against returnee women migrant workers.”
09/12/2020
“As long as there is someone who needs my support, I will be there to provide assistance.”
END_OF_DOCUMENT_TOKEN_TO_BE_REPLACED