On the UN Day, UN Women with UN agencies in Bangkok awarded a true talent of an Indonesian citizen for best reflecting the UN value through photographs at a regional photo contest 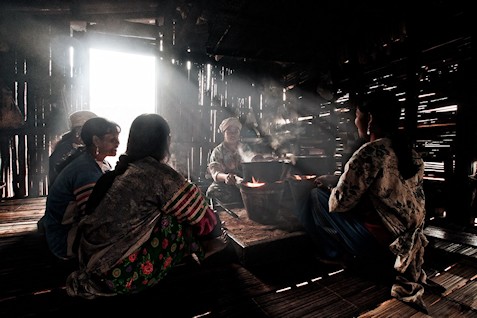 Lahu hill tribe ladies in a village of Omkoi District, Chiangmai Province
are giving each other a helping hand at dinner. It was a simple life,
but full of solidarity among them.
Photo credit: Phalakorn Hunsanimitkul, Thailand

On the UN Day, UN Women with UN agencies in Bangkok awarded a true talent of an Indonesian citizen for best reflecting the UN value through photographs at a regional photo contest

The grand prize winner and two runners up were announced for the UN-sponsored photo contest that invited residents of Asia-Pacific to send in their best shots that reflect UN values in their neighborhoods, cities, countries or the region.

Ms. Dwi Kristyadi took the grand prize, with her submission of “On the Wet Ground” which shows a volunteer giving lesson to street children in Jakarta. In a makeshift classroom on a bare concrete are gathering impoverished children of the Indonesian capital.

Mr. Phalakorn Hunsanimitkul from Thailand and Mr. Arup Ghosh from India took runner up prizes and were awarded a Nikon Coolpix P310 camera. Their submissions featured a photograph of Lahu women hill tribes in Chiang Mai province of Thailand and an education-for-all campaign in Bengal, India, respectively.

The “UN4U Asia-Pacific Photo Contest” called residents in ESCAP Member States to send in up to three photos that illustrated one of the following UN values: freedom, such as freedom from want and freedom from fear; dignity; solidarity; justice; protection; human rights; security; empowerment; sustainability; progress; equality; and peace.  The purpose of the contest was to showcase the creative talent across the region, and encourage people to reflect on the work of the UN and what it means to them.

More than 500 contest participants showed great creativity in illustrating the values, submitting more than 1,300 beautiful photos from 32 countries across Asia Pacific.  In addition to submitting photos, participants were asked to write a caption that explained how their picture reflected one of the values, and people didn’t disappoint, writing moving and inspiring descriptions of how these values touch their lives and have an impact on their families and communities every day.

Entries were selected by a group of experts namely Mr. Nirmal Ghosh, President of the Foreign Correspondents’ Club of Thailand; Mr. Piyatat Hemmatat, a professional photographer and lecturer; Ambassador Atchra Seriputra of the United Nations Association of Thailand; and Mr. David Swanson of IRIN.

The top contest entries are displayed in an exhibit at the UN Conference Center in Bangkok as part of the 2012 UN Day commemoration from 24 October – 2 November 2012.

Related News
15/07/2022
UN Women works with the Government and civil society on training to protect women and children from conflicts in Aceh, Indonesia
29/06/2022
Aid activists and a goat farmer tell of how a Sweden-funded project has changed lives
13/10/2021
Take Five: “Women are a driving force in disaster risk reduction and emergency response”
08/03/2020
Take Five: “Our mission cannot be realized without women’s economic empowerment.”
08/03/2019
When more women work, economies grow: European Union and UN Women partner to boost women’s economic rights and opportunities in Asia
END_OF_DOCUMENT_TOKEN_TO_BE_REPLACED