Actress and UN Women Acting Head Lakshmi Puri to be honoured today by Cinema for Peace Foundation in Berlin: “UN Women a global champion for women and girls”

(Berlin, 12 July) UN Women Goodwill Ambassador Nicole Kidman and UN Women Acting Head Lakshmi Puri are to receive awards from the Cinema for Peace Foundation today. They will be honoured at an evening event in Berlin, Germany. The Government of Germany is among UN Women’s leading donors.

“Women represent half of humanity, and of its potential. Yet around the world women are still deprived of a life free from discrimination and violence. We applaud the establishment of UN Women as a global champion for women and girls,” said the Board of the Cinema for Peace Foundation in its decision to honour UN Women and its Goodwill Ambassador. “Nicole Kidman has helped give a voice to countless women who are survivors of gender-based violence. She is a role model for others.” 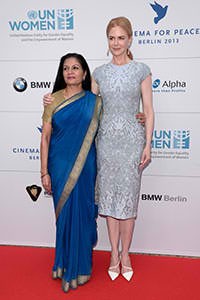 Nicole Kidman was appointed as UN Women Goodwill Ambassador to promote women’s rights worldwide. A strong focus of her efforts has been on ending violence against women. Ms. Kidman has served as the international spokesperson for UN Women’s “Say NO – UNiTE to End Violence against Women” initiative, and has travelled to meet with survivors of sexual violence and raise attention to this pervasive human rights violation worldwide.

Speaking on the issue and her engagement as UN Women Goodwill Ambassador, Nicole Kidman said: “I have learned much about the horrific scope of violence against women around the world and seen its devastating impact. When I first learned that one in three women and girls experience violence in their lifetime, I was utterly shocked. Much of my work for UN Women has since been dedicated to this issue.”

Cinema for Peace has since 2001 served as a forum to bring together internationally renowned figures from the fields of film, politics and society to raise awareness on humanitarian issues. Assistant Secretary-General and UN Women Acting Head Lakshmi Puri expressed her appreciation for the Foundation’s work and award, stressing the need for strong partnerships in light of the persistent challenges for women’s empowerment and gender equality.

“There is so much to do. Right now, we are looking to Egypt where UN Women has supported women since the early stages of the democratic transition. At this crucial juncture, women must be part of a peaceful and democratic dialogue to determine the country’s future,” added Ms. Puri. “In Syria, too, women must fully take part in the mediation and reconciliation process. UN Women is an advocate and supporter of women there so this can happen.”

An advance photo of the event in Berlin will be available through Getty photos at 6:00 p.m., Central European Summer Time, at: http://www.image.net/cinemaforpeace_kidman_berlin_2013
More photo and video material will be made available at the same link after the event.

Related News
20/06/2022
In the words of Nadesan Suresh
13/06/2022
UN Women-suported workshop: Promoting policewomen can strengthen prevention of violence against women and girls
24/05/2022
Inspiring Voices from Pakistan
10/05/2022
In an Indonesian province, the people devise a gender-responsive action plan for peace
28/04/2022
Cambodia receives funding from the Elsie Initiative Fund to identify barriers to the deployment of uniformed women to United Nations peace operations
END_OF_DOCUMENT_TOKEN_TO_BE_REPLACED