Reporting on the Beijing+20 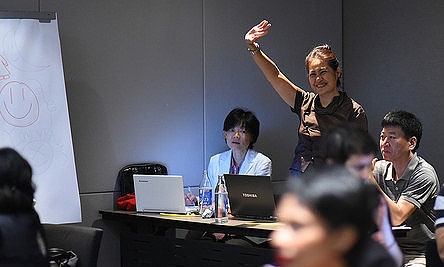 “Think back to the first time you were told you couldn’t do something because of your gender. Now share that story with the person next to you.”  There was a momentary silence as 27 journalists both women and men from 20 nations thought about how gender roles had limited their freedom of choice. Suddenly the room was full of noise, as stories poured out.

The question was posed to journalists from the Asia Pacific region, invited by UN Women and the United Nations Population Fund (UNFPA) to participate in training for Reporting on the Beijing+20, Youth Engagement and Gender Responsive Advocacy for Media in Asia and the Pacific. Despite diverse cultural backgrounds, the journalist’s personal experiences with patriarchal gender limitations had much in common.

Babita Basnet of the Media Advocacy Group Nepal commented, “It is incredible isn’t it? No matter where you are these problems are so similar.” Her colleague Shreejana Shrestha, reporter for Nepal’s Republica Newspaper, echoed her sentiments, “I had never planned to report on gender because I always imagined it was too soft a topic for political journalism. However, after studying overseas, I saw that women experienced similar pain and suffering all over the world. I then understood that this was a big issue that must be reported.” 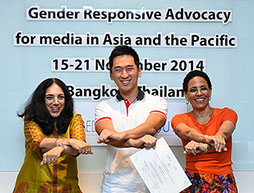 I was lucky enough to attend some of the training sessions, allowing me to delve into the journalist’s knowledge and experiences in reporting on gender.  I quickly realised that Shrestha’s concern over gender being too “soft” a topic for a serious news audience was shared by all present.

“I have been interested in gender politics since I reported on the Beijing Platform for Action 20 years ago,” commented Rita Widiadana, of the Jakarta Post in Indonesia. “I was there. It was confusing at first because I was taking on gender, which was considered a weird topic. Everyone else wanted to cover hard politics.”

Swapna Majumda of the Citizen News, India, agreed with Rita. “Politics was the area to be in if you were a serious reporter, because really, who would listen or print your stories if you were writing about women’s inequality?”

However, during her time covering political campaigns, Majumda began to collect a more diverse range of political views. “I would ask women for their opinion, and the response was always the same, ‘You wouldn’t understand what we think, because you don’t know about our struggles.’ It was true, I didn’t know what they thought and how they lived, because I had never reported from their perspective… so I started expanding and I realised that everything in their lives was political in some way.”

Today, gender issues are still a marginal topic for journalists. In-depth, political, economic and socially-minded articles on gender equality are often relegated to special interest columns of newspapers. But the passion for equality shown by journalists attending the training showed that talented writers are taking these issues very seriously.

The stories of gender inequality shared by these reporters with their readers on a daily basis are stories of real women and men, and the unequal impact gender politics and government legislation have on their lives. As Kiran Bhatia, gender advisor for UNFPA’s Asia Pacific regional office reflects, “There is a reason feminists say ‘the personal is political’. The effect of gender inequality in our daily lives is politics in its most pure form.”

At the end of an intense week of training and reporting on the progress of the Beijing+20 Asia Pacific Review, I was curious to find out how Rita Widiadana felt the event had compared to the initial conference almost 20 years before.

“Things have changed so much, including the awareness people, journalists, and the government have on these issues...  I have done this for so many years, but the training with fellow journalists was refreshing because I was able to see how many people want to be part of the solution. This is not just about government and ministers anymore. This is about us, the media in this room, working together across our generations and cultures, towards a better future.”