Landmark Research on Women’s Access to Justice, Land and Property Rights in Timor-Leste 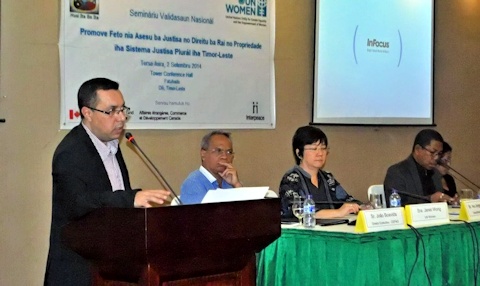 The workshop was launched by a prestigious panel made up of the Vice-Minister of Justice Mr. Ivo Jorge Valente, the Secretary of State for Land and Property Mr. Jaime Xavier Lopes, UN Women’s Country Representative Ms. Janet Wong, the Coordinator of Rede ba Rai Ms. Santia Fernandes, and the Director of CEPAD Mr. Joao Boavida.

Conducted across the three study locations of Baucau District, Bazartette Sub-District (in Liquica District) and Betanu suku (in Manufahi District), the study has been examining the connections between land, gender and justice in Timor-Leste in light of the draft legislation on land and property that is currently under negotiation in the National Parliament.

As it stands, Timor-Leste’s legal system is characterised by the overlapping of the state justice system and customary justice systems, which include traditional and regional-legal influences.  The research being conducted aims to clarify the impact of each system on women’s access to land and property rights, taking into account women’s lived experiences.

Mr. Boavida of CEPAD explained the goals of the research by stating that, “the formal and informal justice systems in Timor-Leste often complement each other, but can also challenge each other.” The Deputy Minister of Justice, Mr. Ivo Jorge Valente, went on to comment that for the state justice system “the research presented has great value as we must make laws that reflect the real situation, including the cultural situation for women in Timor-Leste.”  Both Mr. Valente, and the Secretary of State for Land and Property Mr. Jaime Xavier Lopes, highlighted that the Government of Timor-Leste (RDTL) has undertaken measures to safeguard the interests of women, specifically in Sections 16(2) and 17 of the RDTL Constitution, which states that there should be no discrimination against women.

While laws are protecting the rights women, in reality women continue to face challenges accessing formal justice systems including, but not limited to: low literacy levels and little or no knowledge of Portuguese, which is the language in which legal proceedings take place, inability to pay for legal representation or transport, cultural and traditional limitations, potential social stigma, and a lack of understanding and confidence in the formal judicial system.  In light of these challenges, Mr. Lopes stated “those of us here today are the people who are building a nation.  We must work together to recognise the rights of women and the difficulties in their access to justice.”

Janet Wong of UN Women added that “law-making needs to take into consideration the complexities of women’s rights to land and access to justice in the context of plural legal systems.” She proposed that it is not just law makers who must rise to the challenge, but the community itself because, “together we play the role as agents of change, as agents of nation building in Timor-Leste.”

CEPAD and UN Women will continue to work together to action the recommendations of the research that has been conducted and advocate changes across all justice systems, as well as socio-economic and cultural structures in Timor-Leste.