A Dignified Life of Sakina Bezum 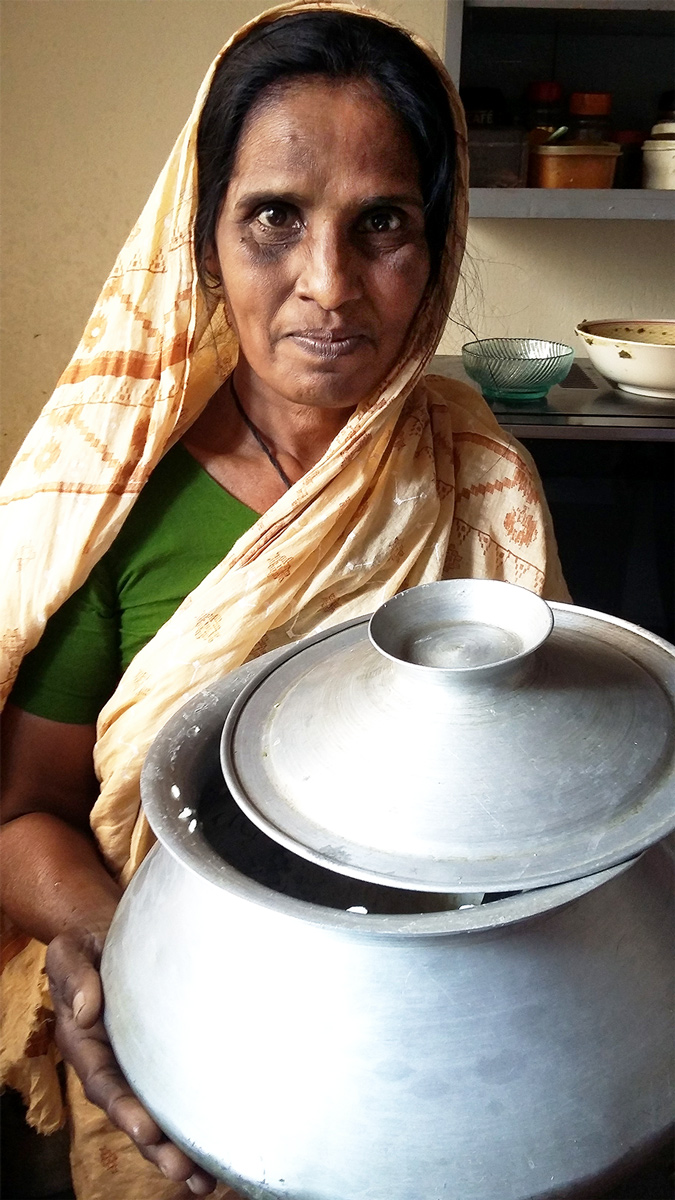 Sakina Bezum, 50, widowed with three children, survived constant hardships after a tiger attacked her husband 22 years ago when he went to collect wild honey, logs, fuel woods and medicinal plants in a deep jungle. He left nothing for her and the children but a financial burden of 50,000 Bangladeshi Taka (USD 640) that “has chained” her from economic freedom for over two decades. She never had a chance to investigate the tragic incident. Soon enough, Sakina was an outcast in the eyes of people in the village for bringing bad luck to the family.

Sakina dropped out of school two years after she attended due to poverty. Education was only for boys in the village where she was growing in. Only skill she had was cooking and house cleaning. “What could a rural, uneducated widow do?” she mourned in tears.

She assumed the responsibility of brining up their three young children alone after her husband’s sudden death. They left the house and moved in her father-in–law’s in Khulna, one of the most disaster-prone areas in the south-west of Bangladesh. Her in-laws were watching the children during the day when Sakina was working as a domestic help in the village, earning 100 taka a month or 1.25 dollars. She was still paying off her husband’s debts.

Bad luck struck her twice. Her in-law’s house was washed away by river erosion. Natural disaster hit everyone else as hard. “We had nothing, nothing left at all.” To the capital city Dhaka, off she went. “I have to be strong,” 28-year-old Sakina, then, resonated that line over and over again.

Situation for Sakina has improved over the years with more earnings in Dhaka. She has learnt to cook more dishes and some housekeeping skills from her friends. “My employers were pleased,” she grinned. She was able to send more money to her children to support their education. The size of remittance was just enough for her left-behind family members.

Twenty years passed. Her eldest son finished his primary school and is now a day worker at various construction sites. “It’s still unstable. He does not earn everyday.” Sakina still receives phone calls from her grown-up children asking to spare some from her hard-earned wages of 4,500 taka (60 dollars) per month, 3000 taka of which is for her rent of a “shack” in Dhaka. But it is a “safe home” for her.

“The rest of money I have now is for education of my grandson,” she said. “I can’t keep it for myself.” Sakina does not have a bank account. “Thumb print is not acceptable at any banks.” Sakina is now working as a cleaner and cook in an established office. Her work is more secured than before and should expect to receive some social welfare. Health is taking a toll on her. “I cough a lot during the night, sometimes all night.”

When asked if she has a dream, “A friend in need is a friend indeed.” It was not quite an expected answer to this question. But it means a lot for a widow like Sakina who has fought to survive in such constant hardships. “I want to lead a dignified life.”

This story also published for "I am (wo)man" campaign at EmpowerWomen. To know more about the campaign or read more stories of those rel="noopener noreferrer" amazing people visit: http://www.empowerwomen.org/en/multimedia-center
Related News
25/05/2022
Leading gender equality today for a sustainable tomorrow
01/02/2022
In the words of Tarikul Islam
30/11/2021
Knowledge Hub on Labour Migration in South Asia Launched
26/07/2021
I am Generation Equality: Nazia Zebin, Bangladeshi activist for rights of women and empowerment of youths
01/06/2020
UN Women and Rohingya women at the frontline of COVID-19 response
END_OF_DOCUMENT_TOKEN_TO_BE_REPLACED