A family rebuilds after the earthquake in Nepal

Dakshinkali, Nepal - As the fateful earthquake struck Nepal on 25 April, 22-year-old Shanta Tamang, went into labour. Shanta’s mother managed to find a local taxi and rushed her to the nearest hospital. The next day, baby Rehan was born. Shanta and her baby went home in an ambulance the following day. 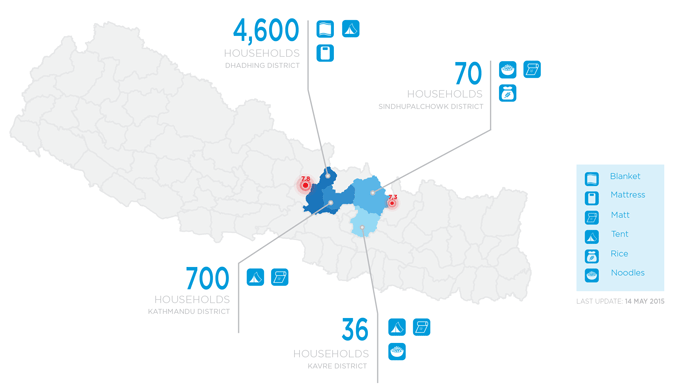 Since the devastating earthquake struck Nepal on 25 April, the NGO Pourakhi has provided support for the most vulnerable populations, in particular girls and women and their families in four districts; Dhadhing, Kathmandu, Sindhupalchowk and Kavre. More than 5.400 households in the affected areas have received the essential supplies including blankets, mattresses, mats, tents, rice and noodles. Graphics: UN Women Asia and the Pacific

Instead of the joy of a mother coming home to celebrate the event, Shanta and Rehan joined their family of 12 in a small makeshift shelter. The family, including her grandmother, 18-year-old sister-in-law Kopila, both of their respective husbands, and 2 other children, all sleep on one mat. The floor and back wall is a dirt bank; the roof, some corrugated sheets; the front, just a piece of blue tarpaulin, open to the elements. The only light is a tiny oil lamp, sitting in a niche dug into the dirt wall. 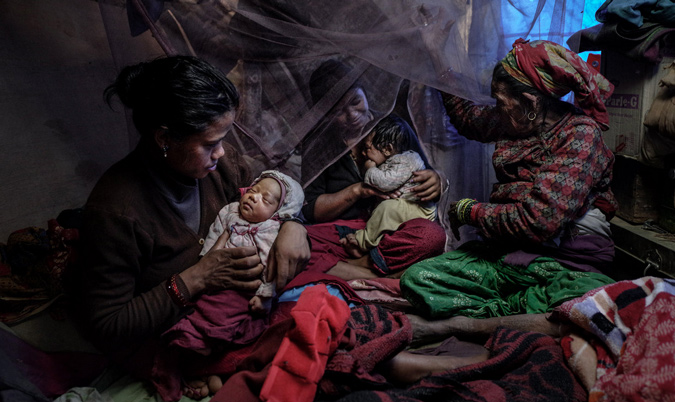 Mother and new-born-baby, together with their family of 12 share this desperate tiny shelter, their home and all belongings destroyed by the force of the quake. Usually the return home of a new baby would be cause for great celebration in the family, however, Shanta, eft, and new baby Rehan shown here on the left-hand side, have little to celebrate. Photo: UN Women/Piyavit Thongsa-Ard
See also

This family of traditional farmers has worked on the land and over the years created beautiful flat terraces from what once was sheer hillside, allowing them to access the land, and grow their crops.

Their home located in Dakshinkali, an agricultural region on the ridgeline of the high hills just outside of Kathmandu City, was completely destroyed by the earthquake, and everything they owned is now gone. The men in the family farmed the land around the house, and usually managed to get by, but it was a hand-to-mouth existence, with no chance of saving money, not even to buy a blanket or soap.

This shelter is the best they could make from what they could find around them. The nearest water is 15 minutes’ walk away, and has to be carried back in containers, held inside traditional baskets. Shanta, with her new baby, join her 18-year-old sister-in-law Kopila Tamang, who herself has a 5-month-old baby, Jivan.  Two young mothers who are barely able to care for themselves, or their babies, are now facing even greater hardships.

The sanitary conditions are dangerous. The family toilet was also destroyed at the same time as their home. Their latrine is now an open field. The babies, young children, and elderly grandmother are most vulnerable to sickness as a result. 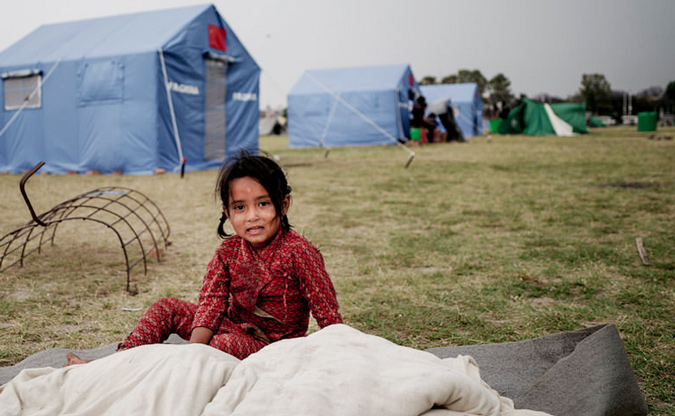 Space between tents at the temporary shelter is now being used as their new playground for those affected Nepali girls and boys. Photo: UN Women/Piyavit Thongsa-Ard

This family was discovered in this condition by an NGO Pourakhi, this NGO set up with assistance from UN Women, Nepal. Their powerful numbers of  members  works at the grass-roots level in the community and whose founder had instructed Pourakhi members, to scour the region to identify women, young babies, and the elderly – who may face higher risks as a result of the earthquake, due to their social condition, illness and poverty. 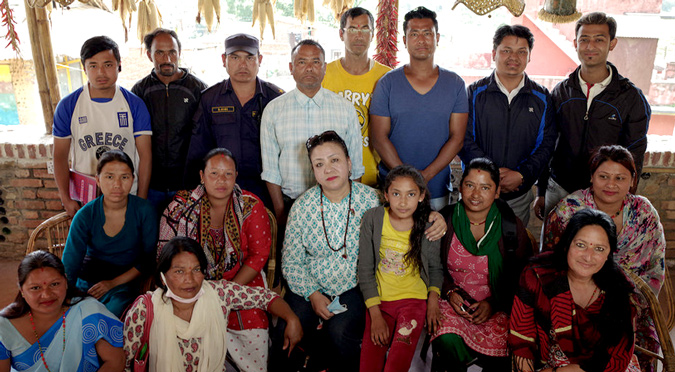 A call for an emergency meeting after the quake for doing rapid assessment and plan for future recovery works of Community Alert Group/Pouraki. Photo: UN Women/Piyavit Thongsa-Ard

A Pourakhi member located Shanta’s family and identified them as needing urgent help: Pourakhi will distribute and provide food, a tent and blankets – urgently needed aid.

Seetashma Thapa contributed to this article.

Related News
01/10/2021
Comprehensive relief package provides support to women and excluded groups during the COVID-19 pandemic in Nepal
10/07/2020
In Nepal, a woman-managed quarantine centre tends to women’s unique needs and recovery
14/04/2020
From where I stand: “I want to hug my daughter and take care of my parents, but this sacrifice needs to be made to keep them and others safe”
11/05/2016
Getting back on her feet again in Nepal
02/05/2016
UN Deputy Secretary-General visits UN Women multipurpose centre in Nepal
END_OF_DOCUMENT_TOKEN_TO_BE_REPLACED