Women, Leadership and the Glass Ceiling in Public Services 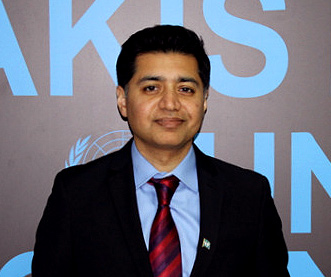 Last month, I attended an event at the Foreign Office marking International Day of United Nations Peacekeepers. As the second largest contributor to the UN peacekeeping missions around the world, the dedication, service, and courage of the Pakistani ‘blue helmets’ are highly regarded by the UN and the international community. Of the usual ceremonial speeches, one stood out as the most inspiring. Deputy Superintendent of Police, Ms. Shahzadi Gulfam spoke of her remarkable career spanning two decades in public service with the Punjab police. She was the first Pakistani female to be deployed as a UN peacekeeper and the only one to have received the International Female Police Peacekeeper Award from the United Nations. Ms. Gulfam is among the finest examples of Pakistan’s public service with an increasing number of women joining its ranks. There is however much more work to be done as the representation of women in Pakistan’s public service is among the lowest in the Asia-Pacific region at less than 5 percent. Comparable figures for Bangladesh and India are 21 and 19 percent, respectively. Some countries in Africa, such as Somalia and Uganda are doing even better with women comprising up to one-third of their public services.

Why should this matter? When public services are guided by principles of merit, equality, and justice, it can be a role model for the society it serves. Public administration at central, regional, and local government levels, is the primary medium through which policies and programmes are implemented. Thus women’s equal decision-making in public administration must be seen as a key development priority. Empirical evidence suggests that women’s equal participation in the senior levels of public service brings increased benefits to their families, communities, and countries. Women’s representation in local governments has made a difference in terms of investment in basic services. Research compiled by UN Women on panchayats (local councils) in India discovered that the number of drinking water projects in areas with female-led councils was 62 per cent higher than in those with male-led councils. Similarly, in Norway, a direct causal relationship between the presence of women in municipal councils and childcare coverage was found.

In spite of numerous progressive initiatives on women’s empowerment and gender equality, including the introduction of a 10 percent quota for women in the public services, women in Pakistan continue to experience challenges and barriers related to recruitment, retention, and promotion in the public service. Just as in politics, the private sector, and other spheres, traditional social norms and structural factors conspire to obstruct women’s equal role in decision-making within public administration. In the public sector, women’s absence from senior positions tends to be linked to the promotion policies of the Government, based on seniority and minimum length of service. Women entering the public sector through quotas or merit would still not reach senior positions until the minimum length of service is attained. Such policies are not gender sensitive as they do not sufficiently take into account the breaks in service that women may need for family reasons such as the bearing and raising of children while their male compatriots ascend their career ladders unimpeded. In addition to the proverbial glass ceiling, which prevents many women from reaching the top tiers of the civil service, ‘glass walls’ may also confine women to the social or ‘softer’ sectors such as culture, education, women’s affairs, and health. This also may explain their under-representation in the departments responsible for economic, finance, planning and security matters.

Until now, much of the focus on expanding women’s participation in leadership and decision-making has been on increasing representation in the parliaments. On that front, Pakistan has outperformed many countries in the region and beyond including Bangladesh, India, Turkey, Ireland and USA (among others) with almost 21 percent of representation in parliament. This notable progress in the legislature should also be replicated within the executive branch of government, both at the federal and provincial level. Unlike women’s political participation which is monitored by the International Parliamentary Union (IPU), unfortunately no global tracking mechanism of women’s leadership in public administration exists, resulting in gaps in global data and attention to this very important issue.

Today (23 June) marks United Nations Public Service Day to celebrate the value and virtue of public service to the community and country; to highlight the contributions of exemplary public servants such as Shahzadi Gulfam and to encourage policymakers to ‘step it up’ in terms of reinvigorating Pakistan’s commitment to gender equality including in the public sector as part of Vision 2025 and in preparation for the forthcoming Sustainable Development Goals to be endorsed by Heads of State at the UN in New York this autumn.

Jamshed M. Kazi is the UN Women Country Representative for Pakistan. He expressed his opinion to mark the occasion of United Nations Public Service Day - 23 June

Related News
30/11/2021
I am Generation Equality: Tabbasum Adnan, Founder of First All-Women Council of Tribal Leaders in Pakistan
24/09/2021
Strengthening institutions key to women rights, says President Alvi at National Seminar on Protection of Women Against Harassment
21/09/2021
UN Women puts spotlight on the role of CSR for Women’s Economic Empowerment in Pakistan
03/08/2021
I am Generation Equality: Bushra Abdullah, Pakistani embroidery worker and advocate for people with disabilities
24/06/2021
In the words of Maria Mahmood: “I am proud to be the voice of the voiceless”
END_OF_DOCUMENT_TOKEN_TO_BE_REPLACED