Good morning to you all! 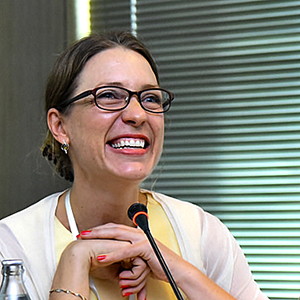 On behalf of UN Women, I would like to begin by thanking the Government of Malaysia, for convening this ASEAN Inter-Pillar Dialogue on the impact of ASEAN Economic Integration in the Labour Sector. We are honoured to be co-hosting and participating in this important dialogue.

I would also like to especially thank our partners in the ASEAN Secretariat and the Frederick-Ebert Foundation (FES), for collaborating with UN Women in our jointly commissioned study on the “Gender Dimensions of the ASEAN Economic Community”, and to the Government of Australia for funding and supporting this important work.

Over the past two decades, the ASEAN region has seen impressive levels of economic growth. At the same time, we know that this growth has not been evenly distributed, resulting in rising inequalities within and between countries. Growing economic disparities, and the corresponding challenges for many States to ensure universal access to education, health, decent work and social services, provide both the push and the pull factors for labour migration within the region. Reducing these disparities also forms a centerpiece of the overarching goal of the Sustainable Development Goals of “Leaving no one behind.”

We know that there are clear gender dimensions of migration. A large proportion of the women who move within ASEAN do so in the service sectors, within the health systems, agriculture, the tourism and garments industries, or as household service workers.

To better understand the impact of the ASEAN Economic Community (AEC) on women in ASEAN, the UN Women Regional Office for Asia and the Pacific, together with the ASEAN Secretariat and the Frederick Ebert Foundation (FES) and with the support of the Australian Government, commissioned a study on “Gender Dimensions of the ASEAN Economic Community”. The study seeks to answer the question of what opportunities economic integration offers for accelerating gender equality and women’s economic empowerment in the region, but also what challenges exist which may prevent women from taking advantage of these newly created opportunities.

There is no doubt that women workers already play a critical role in ASEAN, making significant economic contributions to their families, communities and societies. However, our study shows that women also suffer from specific and deeply gendered inequalities which – unless addressed through targeted measures – will limit their ability to take full advantage of the opportunities created by the economic integration.

First of all, women are much less likely than men to be in paid employment, with significant inequalities in women’s labour force participation. But due to gender segmentation in the labour market, there are also differences in the types of work that women do: they are much more likely than men to work in sectors that are low-skilled and low-paid, or as unpaid family workers, which results in wide gender pay gaps. Many are in informal and vulnerable employment, with poor working conditions and without benefits such as pensions or parental leave. On top of this, married women spend on average 3.5 hours more per day than men on unpaid care work – what is sometimes known as the “motherhood penalty”. Particularly in the absence of quality, affordable child care, this burden means that women have few opportunities to balance their domestic and employment responsibilities.

At the macro level, there are also a number of legal and social barriers which limit women’s access to economic resources, such as access to finance and property ownership. If women are to realize their potential gains from increased trade, these barriers also need to be removed.

In brief, the study finds that while the AEC is likely to have a significant potential impact on women in terms of the volume of jobs created, it may have a smaller impact on changing these gender patterns in employment and wages. In fact, as men predominate in trade, investment and skilled labour, targeted measures are needed to ensure that the potential of the AEC for women’s empowerment is realized.

The study also provides a number of concrete policy recommendations for ensuring that our common vision of inclusive growth, shared prosperity and reduced inequalities is realized, and for ensuring that ASEAN integration improves the lives of both women and men. These include: bridging the education and skills gaps to support women to participate in trade-oriented sectors; supporting women entrepreneurs, including with access to finance; reforming child care systems and promoting equitable family leave policies; and ensuring that existing laws and policies on non-discrimination are duly implemented, including in matters such as violence against women, property ownership or equal pay.

I would once again like to thank the Government of Malaysia for providing the platform for this important inter-ministerial dialogue within ASEAN to take place. I am sure that in today’s discussion, you will identify additional recommendations for ensuring that the opportunities which arise from deeper economic integration can be enjoyed by women and men equally.

As UN Women, we look forward to continuing to deepen our collaboration with ASEAN member states in supporting the implementation of the recommendations. Doing so will benefit not just individuals themselves, but also private businesses, the economy and society at large.

Related News
09/12/2020
“I don’t want to miss one single call from a survivor, so I started to bring my phone with me, even when I take a shower”
09/12/2020
“No one deserves discrimination, inequality and violence, in hard times or in normal times.”
20/05/2022
Leading the way for Gender Equality in Malaysia private sector
01/02/2022
In the words of Tarikul Islam
20/12/2021
In Cox’s Bazar, gender-responsive policing efforts build trust with Rohingya women and girls
END_OF_DOCUMENT_TOKEN_TO_BE_REPLACED