Port Moresby Governor Powes Parkop Joins HeForShe: We will March until Violence against Women is Zero and their Full Potential is Realized

Bangkok, Thailand – Powes Parkop, Governor of Port Moresby since 2007, announced his commitment as a HeForShe supporter: “Gender equality is important in Papua New Guinea. If men and women are working together, we can realize the full energy and potential of both men and women, and our country and our people will be much greater than it is now”.

Globally, only 22 per cent of all national parliamentarians were women as of August 2015, a slow increase from 11.3 per cent in 1995. According to the data compiled by the Inter-Parliamentary Union on the basis of information provided by National Parliaments by 1st February 2016, Papua New Guinea is ranked 181 out of 191 countries classified by descending order of the percentage of women in the lower or single House, with only 2.7 per cent of women participation. “It is important to have more women in leadership positions, I have been in the Parliament advocating for bringing women,” said Parkop.

The Governor also declared Port Moresby to be a Safe City for women and girls on the occasion of International Women's Day 2016, where 85,000 people came out to join him in a Walk for Peace. “We work with UN Women and other partners to promote Safe Cities (initiatives). With men and women respecting each other, working together, the potential will be much more than what we have today. I am encouraging people in Port Moresby to join the Sunday walks to end violence against women. We have 80,000 people on weekends. We will do more and more advocacy work. I won’t stop,” he added.

Sexual harassment and other forms of sexual violence in public spaces are an everyday occurrence for women and girls around the world - in urban and rural areas, in developed and developing countries. Port Moresby’s National Capital District has taken steps to improve women’s safety in local markets, including budget allocations that ensure the needs of women and men are taken into account across different municipal departments. Without peace and security there cannot be development, and as a community space Governor Parkop highlighted the marketplace as integral to building and growing peace and unity into the wider city.

As part of his commitment to gender equality, Governor Parkop declared, "Safe cities is not just about reducing violence and crime, but moving our people to a culture of peace and a culture of respect. We are not just reducing violence, but promoting peace, as a way of life. Achieving gender equality in any country is important for the future and wellbeing of that country, but also for the entire global community.” As people in Port Moresby deal with past trauma, particularly from sexual and gender based violence, Governor Parkop said that real change must come within; “We are trying to breakdown barriers and unite our people”. 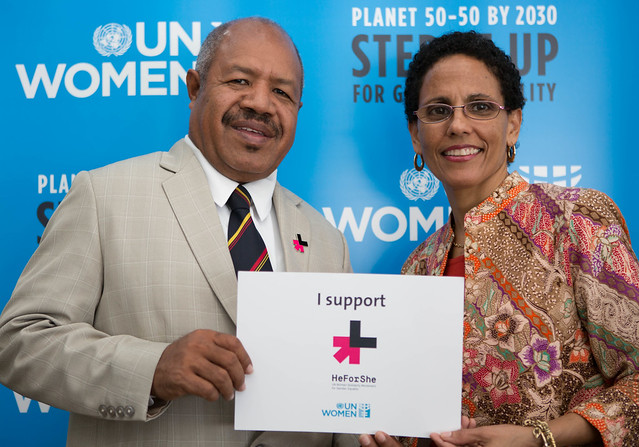