Dili, Timor-Leste – Women’s groups in the National Parliament and civil society are jointly pushing to enhance women’s political leadership in Timor-Leste by supporting female candidates in the upcoming village and national-level elections. 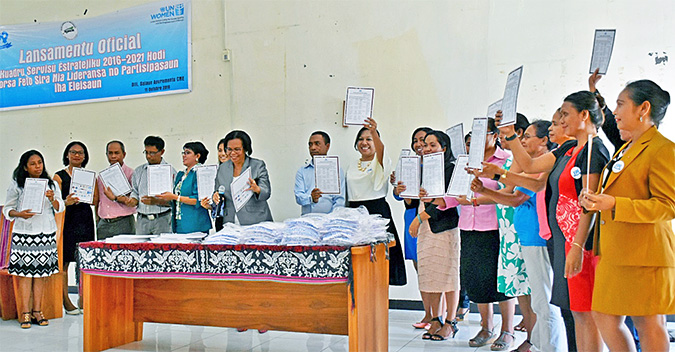 A Strategic Framework 2016-2021 to mobilize female voters and candidates was launched on 11 October by the Women’s Caucus of the National Parliament and ‘100% Hau Prontu’ (I am ready) movement of 15 local and international civil society groups. The 100% Hau Pronto movement was established to increase women’s political participation, in partnership with UN Women and support from the Government of Norway.

Timor-Leste is to hold elections on 29 October for heads and councils of villages nationwide, the Presidential election next March-April, and the National Parliamentary election next July.

Currently, women make up 38 per cent of the Parliament, the highest proportion of any legislative body in the Asia-Pacific. Local governance is another matter. Only 2 per cent of the country’s village chiefs are women, and there are no women among the 13 appointed Municipal Administrators. “Investing in women means to invest in the family, community, society and the nation,” said Florentina Smith, Member of Parliament and President of the Women’s Caucus. “The Strategic Framework to strengthen women’s leadership and participation in the elections serves as a guide to investing in women, in Timor-Leste’s human development, as well as the state.”

Sunita Caminha, UN Women’s Deputy Country Representative, said the effort requires broadening partnerships with men. “Men are overwhelmingly represented in elected positions compared with women and as such, men have an important role to promote greater representation of women in these positions,” she said.

The 100% Hau Prontu movement and the Women’s Caucus have encouraged institutions such as the national electoral bodies and the Ministry of State Administration to support women’s leadership and to give female candidates access to networking and capacity development opportunities before, during, and after elections.

This advocacy led to the Village Law, passed by the Parliament in May, which requires that village and sub-village elections have at least one female candidate.

The 100% Hau Prontu movement has encouraged and given training to more than 319 female candidates across the country for the upcoming village elections. The candidates make their platforms known through an online space, and apply their training in communications, campaign planning and leadership.

The spirit was captured in a poem that Carmeneza dos Santos Monteiro, a representative of Prime Minister Rui Maria de Araujo, recited at the launch of the Strategic Framework:

“Enough already!
I, as a statistic,
I, as a subject,
I as a vulnerable person.