“What is needed most is putting into practice actions that are concrete, investing in people’s education, in the promotion of values of tolerance, dialogue and respect for each other.”

The words of the Minister of Defense, Xanana Gusmao, were presented by the Secretary of State for Security to open the first inter-ministerial consultation on the forthcoming National Action Plan on Women, Peace and Security, which took place on 14 March 2014 in the nation’s capital, Dili.

The presence of more than 50 participants from 17 different government institutions and two civil society observers acknowledges that securing women’s meaningful role in Timor-Leste's development process is not just a commitment enshrined in Timor-Leste's Constitution and Strategic Development Plan, but is the foundation for sustaining the fragile state's future peace. 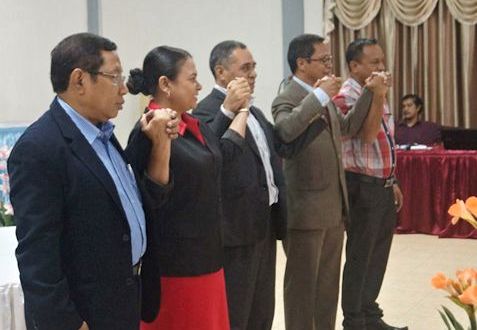 The Minister of Health, Secretaries of State for Private Sector, Security, ASEAN and Industry and Cooperatives join hands to represent their collaboration to develop the National Action Plan on Women, Peace and Security.
Photo credit: Office of the Secretary of State for Security

Organized by the Office of the Secretary of State for Security (SoSS), with support from UN Women Timor-Leste, the consultation resulted in an agreement of support signed by the Minister of Health, Secretary of State for Security, along with the Secretaries of State for ASEAN, Private Sector, and Industry and Cooperatives. The institutions collectively agreed to establish an Advisory Board to oversee the National Action Plan's development, contribute technical staff to support the process, and integrate relevant actions into their annual planning and budgeting exercise.

Turning the global commitment on the Women, Peace and Security Agenda into localized priorities in Timor-Leste, the signing institutions highlighted the key role played by women in developing each sector. Government representatives reinforced their interest in multi-sectoral collaboration to further achievements around women's participation, in prevention and protection from violence, and in the peacebuilding process.

Bringing together, the consultation highlighted the context of the Women, Peace and Security Agenda in Timor-Leste, noting the progress made in areas such as women's participation in the National Parliament (at 38%, one of the highest in the region), and in the security sector, with approximately 16% of the National Police comprising female personnel. The success of women mediators recruited as part of the SoSS early warning and response system was also shared, illustrating women’s valued role in conflict resolution processes.

Highlighting the lessons learned from the NAP on Gender-based Violence, a representative from the Secretary of State for the Promotion of Equality called upon the institutions to work more closely together to respond to the multi-dimensional aspects to security, linking efforts to protect women from domestic violence with actions to increase women in leadership positions and their access to economic opportunities.

These peace and security issues, among others, will be identified with diverse stakeholders and communities through a series of national and local consultations to be held in the coming months. UN Women Timor-Leste will continue to support these consultations other processes to ensure the security priorities and recommendations of the most marginalized and isolated groups are included in the development of the National Action Plan.