From where I stand: “I have seen the impact women’s voices can have”

Syar S. Alia is a young woman advocate for gender equality from Malaysia. Her journey as an advocate began with the first Young Women Making Change workshop for cis and trans women in Malaysia, supported by UN Women Fund for Gender Equality. 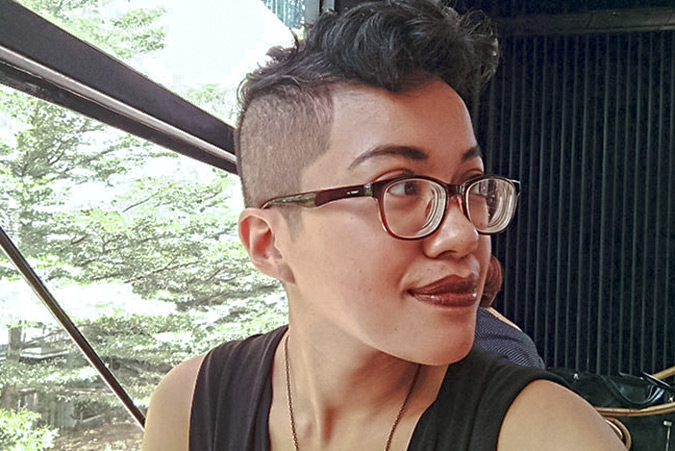 For me, being a young woman living in Malaysia means maintaining an anger about the daily discrimination and harm [that women face], without burning out.

Every day, there is something…an insensitive or downright harmful comment from someone—it could be a Members of Parliament or an anonymous internet user—directed at women and marginalized groups like trans people, gay people, non-Muslims or non-Malays.

The anger helps me move forward, there is much to change.

Attending the first “Young Women Making Change” workshop supported by UN Women broadened my horizons and opened doors for me. I could learn from my peers and find mentors in older and experienced women’s rights activists. Some 30 young cis- and transgender women from all over Malaysia attended the first workshop and brought to the table a variety of issues, ranging from indigenous land rights and animal rights to transgender rights, freedom of speech, and more.

The following year, I became one of four peer facilitators for the next workshop. Together, we facilitated an intergenerational dialogue on issues that affected us. We formed a collective to raise awareness about the issue of sexual harassment in Malaysia.

As a younger advocate, I have learned a lot from older activists in Malaysia. But sometimes, I find that older generations underestimate or dismiss me and my peers because of their perceptions of our generation.

I am a millennial, born into a world where the mistakes of the past are stacked against us; opportunities are fewer and challenges are harder to scale, because of entrenched inequalities, such as existing and growing homophobia, racism, the lasting effects of colonialism, and vast economic inequalities.

But I have seen, first-hand, the impact that women’s voices can have, in changing the dynamics. We need to keep prioritizing and fighting for women’s rights. We need to invest in women of all ages, give them space to speak, listen to them and empower them to lead.”

Arts manager and freelance writer, Syar S. Alia, 29, has been a gender-equality advocate since she was a teenager. After participating in the first Young Women Making Change workshop in Malaysia, organized by International Women’s Rights Action Watch Asia Pacific (IWRAW Asia Pacific) and Knowledge and Rights with Young people through Safer Spaces (KRYSS), and supported by UN Women Fund for Gender Equality, she went on to become a peer facilitator of future workshops and events. Her work is linked to Sustainable Development Goal 5, which aims to achieve gender equality and empower all women and girls.

Read more stories in the “From where I stand...” editorial series.

Related News
20/05/2022
Leading the way for Gender Equality in Malaysia private sector
08/03/2021
More women leaders in business “the best way” to boost recovery from the pandemic
27/01/2021
Entrepreneurs, activists and actors join in for Malaysia launch of a campaign for women’s empowerment in the workplace
09/12/2020
“I don’t want to miss one single call from a survivor, so I started to bring my phone with me, even when I take a shower”
09/12/2020
“No one deserves discrimination, inequality and violence, in hard times or in normal times.”
END_OF_DOCUMENT_TOKEN_TO_BE_REPLACED