Pacific Islands — Using rugby to prevent violence against women and girls and promote gender equality is the goal of a new initiative for the Pacific region launched today by the European Union, Australian Government, UN Women Fiji Multi-Country Office and Oceania Rugby. 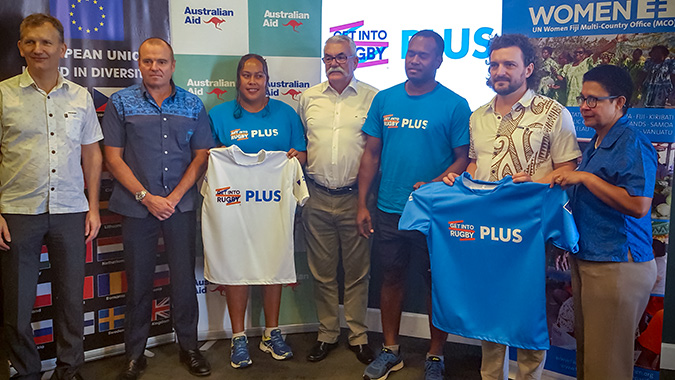 The initiative will be implemented through a new agreement between Oceania Rugby and UN Women Fiji MCO, starting with pilot testing of the new Get Into Rugby PLUS life-skills programme for girls and boys keen to play rugby.

Also planned is regional research to better understand the interaction between violence against women and girls and sport in the Pacific Islands, and a focus on women’s equal participation in community rugby 7s events.

“This is an exciting initiative, for Oceania Rugby and rugby within the region. The Get Into Rugby PLUS programme will create highly skilled rugby coaches who can provide a safe, equal and inclusive environment for girls and boys in rugby,” said Oceania Rugby General Manager and Rugby Services Manager Oceania for World Rugby, Bruce Cook. 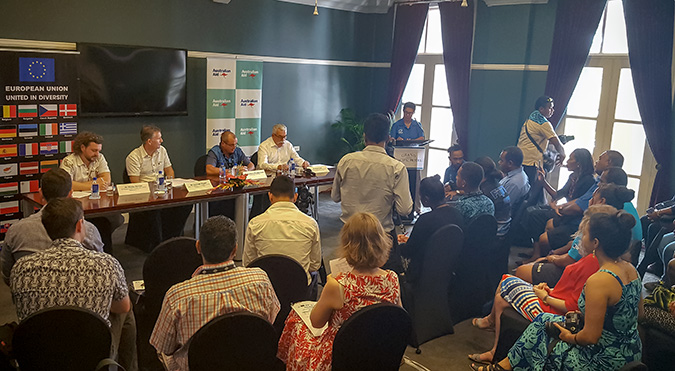 “Selected coaches will be provided high quality training in both rugby related areas and life-skill themes, which will enable these coaches to teach both the game as well as life-skill activities to young players. Using rugby values and these life-skill sessions will challenge gender stereotypes and transform harmful social norms; helping address some of the primary drivers of violence against women and girls. This program will also ensure that more holistic coaches are developed which optimistically will be the new ‘normal’ looking to the future,” Mr Cook said.

Australian High Commissioner to Fiji, John Feakes, said: “Pacific Islanders and Australians share a love of sport, especially rugby. Using rugby to challenge gender stereotypes sends a powerful gender equality message to our communities. Australia is pleased to support Get Into Rugby PLUS through the Pacific Partnership and Pacific Women Shaping Pacific Development.”

Also speaking at the launch, Christoph Wagner, Head of Cooperation at the EU Delegation for the Pacific said, “There can be no sustainable development without gender equality. In the Pacific region a key barrier to equality is violence against women and girls. Pacific Leaders have recognised this as a challenge which should be addressed in a comprehensive manner, including through sports associations. The European Union is proud to support this approach, as it is strongly committed to gender equality, the empowerment of women of all ages and the elimination of all forms of violence against women and girls around the world.”

Leveraging sports-based approaches to promote gender equitable social norms at individual and community levels is one of several key focus areas for UN Women Fiji MCO, which is implementing one of the three outcomes areas of the regional Pacific Partnership.

“Women in the Pacific region face serious inequalities from the highest recorded rates of violence in the world to the lowest rates of political participation globally,” said Nicolas Burniat, Representative a.i. for UN Women Fiji MCO.

“Sport can be an effective tool to address issues of gender inequality by challenging the preconceived ideas that people have about the respective roles and abilities of women and men, and to transform the patriarchal norms which are at the core of violence against women. Anyone who watched the recent Rugby World Cup Sevens and the amazing performances by the 16 participating women’s teams, has seen that clearly there is no such thing as a ‘man’s sport’ or a ‘woman’s sport’. Promoting an equal playing field for boys and girls, women and men in sport is a key strategy to addressing gender inequality and violence against women at all levels of society, from communities to the global stage,” Mr Burniat said.

The Pacific region has some of the highest rates of violence against women recorded in the world – twice the global average with an estimated two in every three Pacific women impacted by gender-based violence. Along with high rates of violence – a violation of human rights – women and girls in the Pacific region experience constant and continual inequalities including low levels of participation in decision making, limited economic opportunities, restricted access to sexual and reproductive health and rights.

To achieve this, the Pacific Partnership aims to transform the social norms that allow violence against women and girls to continue; to ensure survivors have access to quality response services; and to support national and regional institutions to meet their commitments to gender equality and prevention of violence against women and girls. Working through partners, it will promote equal rights and opportunities for all Pacific people, through innovative approaches to education, access to essential services, and policy development.

Related News
08/03/2022
UN Women Fiji MCO and Oceania Football Confederation ‘kick-off’ new partnership to progress gender equality and address violence against women and girls.
22/12/2021
Press Release: Ministry Welcomes ICT Boost to Progress Gender Equality in Fiji
01/12/2021
Launch: Gender-Based Violence Counsellor Training Package for the Pacific
30/11/2021
In the words of a survivor who now helps other survivors: “After 19 years, I woke up. I stood on my own feet.”
30/11/2021
In the words of Reverend Jone Tuiwaiwai: “There are things that God gave us that we cannot change, but our social roles is not one of them.”
END_OF_DOCUMENT_TOKEN_TO_BE_REPLACED