Education and jobs are essential in stemming poverty among women and girls, China and UN Women agree 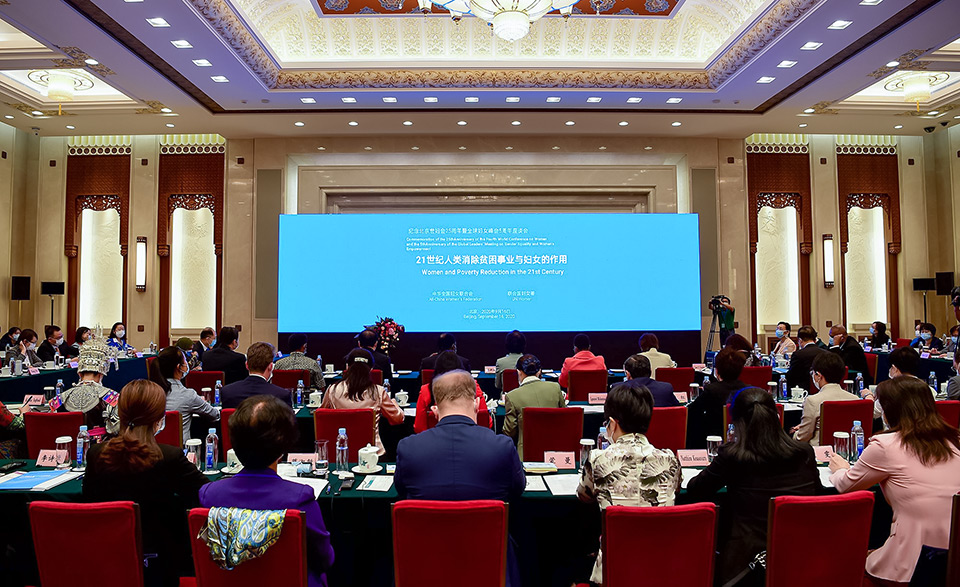 Participants attend the 16 September meeting at the Great Hall of the People in Beijing. Photo: Courtesy of All China Women’s Federation

Beijing, China — First Lady of China Peng Liyuan and UN Women Executive Director Phumzile Mlambo-Ngcuka called for expanding educational and job opportunities as they spoke at a gathering to assess progress on raising the status of women and girls.

The two leaders spoke in recorded video messages to a meeting on Women and Poverty Reduction in the 21st Century that UN Women and All China Women’s Federation organized in Beijing on 16 September. The meeting reviewed what countries have done to deliver on promises made at two milestone conferences on gender equality -- the Fourth World Conference on Women in 1995 and the Global Leaders' Meeting on Gender Equality and Women's Empowerment in 2015.

The 16 September meeting was held at the Great Hall of the People, the seat of China’s National People’s Congress. The almost 100 participants included representatives of the Chinese Government, diplomatic missions, United Nations agencies and women’s organizations, along with female youth leaders.

The 1995 conference called attention to issues such as poverty, the environment, violence against women, girls’ education, and equal participation of women in the labour market -- particularly in high-skill jobs, STEM industries, and senior management positions. It adopted the Beijing Declaration and Platform for Action, a comprehensive global agenda for achieving gender equality and empowering women and girls.Yet analysis by UN Women and United Nations Development Programme released this September said the number of women and girls worldwide living on less than USD 1.90 a day could rise to 435 million by 2021 — including 47 million made poor by the COVID-19 pandemic.

In her message to the 16 September meeting, Peng said China has rolled out multiple measures — including in economic development, employment, education, social security, health care and charities — to help women as part of the goal to end poverty in China by the end of this year. Of the 700 million people who have been lifted out of extreme poverty since the founding of the People's Republic of China in 1949, about half are women, she said.

Peng said that despite progress, there remains a huge gender gap worldwide equality of rights, opportunities and resources.

“On top of that, COVID-19 has brought new challenges to women in poverty reduction, education, health care, employment and protection of rights,” she said.

She called on countries to offer women equal education and employment opportunities as part of a broader effort to close this gap. She said countries also need to work together to bolster access to affordable health care -- which would reduce women’s poverty caused by crippling medical bills -- and foster a social culture free of gender biases.

In her message, Mlambo-Ngcuka said: “We urge China to continue supporting women’s leadership and participation, as well as the cooperation with women all over the world through South-South collaboration, to ensure that girls’ education is saved. To ensure that the burden of care on women is reduced and women can enter the labor market. And to ensure that the women in the informal sector are supported and are able to find their feet again and regain their livelihood.”

“We appreciate all of the work that has been done by China, and we encourage you to continue leading in this area of poverty alleviation and be in the forefront of poverty reduction,” she said.With growing support from local partners such as All China Women’s Federation, UN Women is working to place gender equality and women’s rights at the center of China’s efforts to build back from the COVID-19 pandemic.