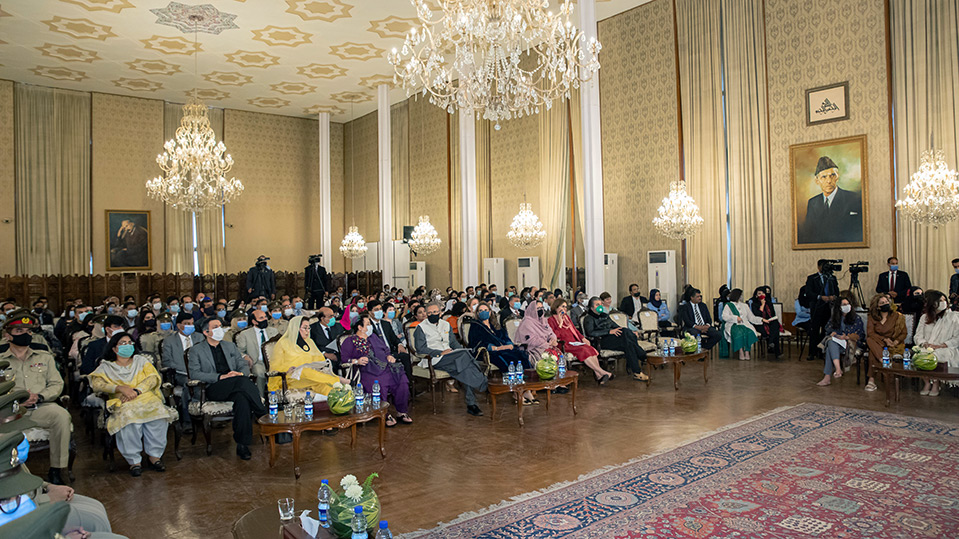 Islamabad, Pakistan — UN Women Pakistan, in collaboration with the Ministry of Human Rights and the EU in Pakistan, commemorated International Women’s Day at the Presidency today. The event served as an occasion to celebrate progress made towards the protection and promotion of women’s rights in Pakistan, and evaluate future steps required to foster and ensure greater female empowerment and gender equality in the country. President of the Islamic Republic of Pakistan, Dr. Arif Alvi attended the event as Chief Guest.

The event acknowledged the achievements of female trailblazers from diverse backgrounds, who were invited to speak about their experiences, accomplishments, and the obstacles that they have faced as women in various career fields in Pakistan. This included Dr. Fehmida Mirza, currently serving as Federal Minister of Inter-Provincial Coordination. Dr. Mirza has the distinction of being the first and only woman Speaker of the National Assembly of Pakistan between March 2008 and June 2013, as well as the first female speaker from the Muslim World. The other female trailblazers who participated at the event included Zubaida Jalal, Minister for Defence Production; Rukhshanda Naz, Ombudsperson for KP Protection Against Harassment of Women at Workplace; Reem Sharif, the first Transgender police officer in Pakistan; Zara Naeem, the ACCA exam topper; and Erum Baloch, youngest Pakistani female hockey player from Jacobabad in Sindh. 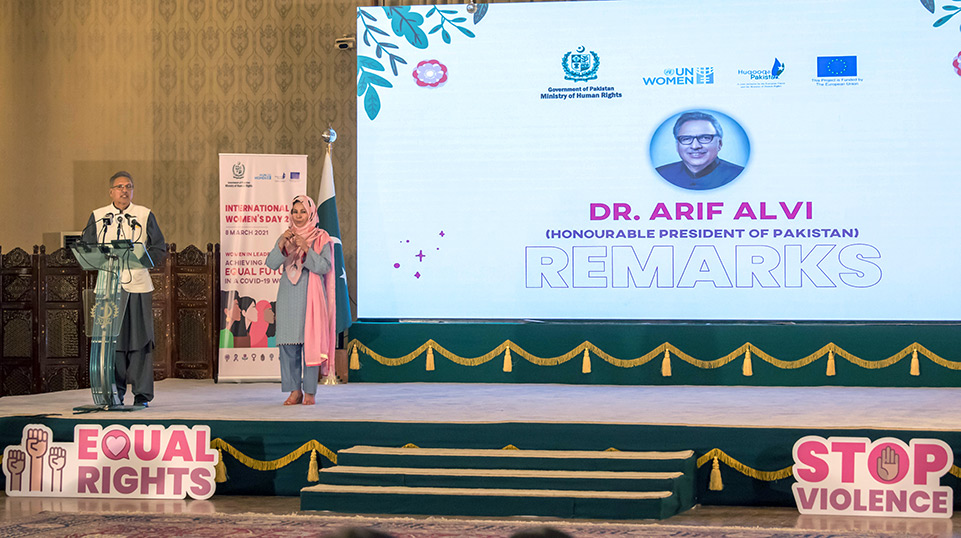 The event also included a musical folk performance by Shamu Bai and Vishnu, a brother-sister duo from rural Sindh. The Ministry of Human Rights also showcased several films that delved into pro-women legislation, women’s rights, and the Ministry’s 1099 National Human Rights Helpline. Sar Buland, a music video tribute to daughters and inspirational women in Pakistan, developed by Samar Minhallah was also showcased at the event.

Federal Secretary for Human Rights, Inamullah Khan gave the welcoming remarks at the event. He spoke about the theme for International Women’s Day this year, “Women in leadership: Achieving an equal future in a COVID-19 world.” He appreciated the central role that women have played in combating the pandemic, featuring prominently at the front lines as health care workers, caregivers, innovators, and community organizers.

Speaking at the event, Sharmeela Rassool, Country Representative UN Women, said, “The COVID-19 pandemic has taught us that inclusivity and diversity of leadership styles make a difference. When more women are in decision-making positions, different voices are heard, and innovative solutions are created. Both the process and the outcomes are for a more just, equitable and prosperous society.”

H.E. Androulla Kaminara, Ambassador of the European Union to Pakistan, acknowledged the significance of the collaboration between Pakistan and the EU in developing key areas of cooperation geared towards gender mainstreaming, women empowerment and elimination of all forms of violence against women, under the Strategic Engagement Plan (SEP).

Dr. Shireen Mazari, Federal Minister for Human Rights informed the audience about the work of the Ministry of Human Rights in supporting the cause of female empowerment and gender equality in Pakistan. “MoHR has focused on strengthening legislation, improving institutional mechanisms for implementation, and increasing awareness amongst the general population about relevant laws, to promote and protect the rights of women and girls in Pakistan. The Anti-Rape Ordinance and the Enforcement of Women’s Property Rights Act in 2020 are two such critical recent advancements in this regard. MoHR has also been working towards upgrading its National Human Rights Helpline to strengthen grievance redressal mechanisms, which are critical for victims of GBV and domestic violence.”

Addressing the event as Chief Guest, President Dr. Arif Alvi called upon the women of the country to be aware of their rights as guaranteed by the Constitution. He emphasized economic empowerment of women to help them thrive in society with dignity, adding that ‘without financial independence, there is hardly any independence’. With regard to the healthcare sector, the President suggested the launch of Tele Health services for women and marginalized groups to provide them accessible, prompt and free medical advice.

The President acknowledged the services rendered by the country’s women during the COVID-19 pandemic, particularly doctors and paramedics. However, he expressed concern that a large number of trained doctors left the profession after marriage, compared with the 70 percent ratio of enrolment in medical colleges. He stressed the need for a change in the country’s employment structure to support professional women and help them advance in their careers and contribute to the progress of the nation.