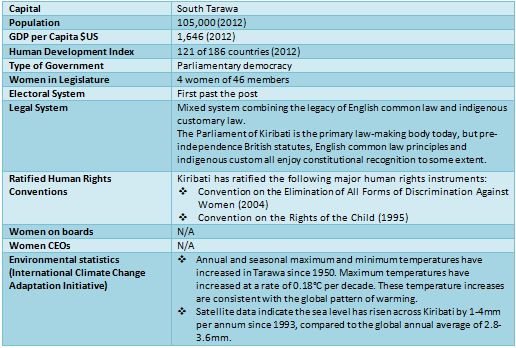 Formerly known as the Gilbert Islands, the Republic of Kiribati (Kiribati) is a Pacific Island nation located near the equator and east of the International Date Line. In 1979, Kiribati gained its independence from Britain. Comprised of one island and 32 atolls, the Republic of Kiribati is spread across 3.5 sq. km. of the Pacific Ocean. The capital city, Tarawa, is home to more than half the population. Fisheries and subsistence agriculture account for a quarter of the gross domestic product and involve the majority of the population[1]. About 90% of Kiribati’s national income is spent on imports – with food and fuel rising from 40 to 60% over the past decade[1].

Kiribati law allows for evidence of prior sexual history to be admissible where it is deemed relevant to the reliability of the victim’s testimony, and common law rules that require proof of physical resistance in order to establish the absence of sexual consent are still applied.

Abortion is illegal in Kiribati with a limited exemption where the life of the mother is in danger.

Kiribati provides for an equal minimum marriage age of 18 for both men and women. Fault-based divorce is practised in Kiribati, and property division following matrimonial breakdown does not take into account non-financial contributions to the marriage. Unmarried mothers automatically lose custody of their children once the child turns two (providing the father acknowledges paternity and wishes to retain custody).

The customs and traditions of the people of I-Kiribati have constitutional protection. Women have no legal recourse where these infringe on the enjoyment of their rights and freedom.

Around one in five women aged 15-49 reported being sexually abused before the age of 15. Of these women, approximately two-thirds reported that the abuser was someone known to them.

Intimate partner violence and child abuse appear to significantly overlap – women who had experienced domestic violence were seven times more likely to report that their children had been emotionally, physically or sexually abused by their partner.

Kiribati has a subsistence economy with a small labour workforce. The government is the largest employer and revenue is earned from remittances from temporary labour, from fishing fees and from international aid. Since 2007 women have comprised more than 50% of the workforce but only slightly more than a third of those are in paid employment[1]. Girls currently outnumber boys in secondary and tertiary education, however, they are still under-represented at all levels of decision-making.

Women traditionally can own and inherit property, however, they often have more limited access to resources. Women are often responsible for producing goods needed to meet traditional social obligations, as well as standard housekeeping and childcare responsibilities.

Women’s healthcare, access to health services and specialised obstetric care is a challenge for outer-island communities[1]. Non-communicable diseases are a primary healthcare issue in Kiribati. Of the total female population of women over 20, at least 53.8% suffer from obesity while 82.8% are overweight.

Data gathered in early 2003 indicated that Kiribati had one of the highest rates of female tobacco smoking in the world, although subsequent studies failed to collect sex and age disaggregated data. There is generally high tolerance of excessive alcohol consumption in Kiribati, and male alcohol use has been found to be positively associated with intimate partner violence.

The 2004 National Disability Survey identified 3,840 disabled persons in Kiribati, of whom 45% were women.

Inadequate and unsafe drinking water, shortfalls in personal hygiene, poor food handling and storage, and poor sanitation are all contributory factors to the high number of cases of diarrhoeal, respiratory, eye and skin infections. Diarrhoeal diseases and respiratory infections are major causes of infant and child mortality.

There is a high prevalence of STIs, with a surveillance study in 2004 showing that approximately 15% of pregnant women were infected. HIV was first confirmed in Kiribati in 1991, and the number of people living with HIV continues to rise.

Over 70% of reported cancers affect women (cervical and breast cancer)

As Kiribati is extremely low-lying (no higher than 3m above sea-level), it is extremely vulnerable to the impacts of climate change, in particular the risks posed by a rising sea level. Without appropriate adaptation measures, 25-54% of the land in areas of South Tarawa and 55-80% in North Tarawa is estimated to be at risk of inundation by 2050. Climate change already manifests itself in changing weather patterns, high tides, sea-level rise, salt-water intrusion on freshwater, coastal erosion, and deterioration and loss of vegetation, as well as magnifying extreme weather events such as storms and drought, to which the country is prone[1].

The natural environment is also threatened by the impacts of groundwater depletion, seawater contamination from human and solid waste, over-fishing and contamination of reefs, lagoons and marine life, ad hoc construction of seawalls, coastal erosion and illegal beach mining.

Annual and seasonal maximum and minimum temperatures have risen in Tarawa since 1950, at a rate of 0.18°C per decade. These temperature increases are consistent with the global pattern of warming. Satellite data indicate the sea level has risen across Kiribati by 1-4mm per annum since 1993, compared to the global average of 2.8-3.6mm each year.

Kiribati’s vulnerability to climate change and natural hazards is aggravated by environmental degradation due to urbanisation and the high population concentration in Tarawa. Human interventions such as groundwater depletion, mining of beach sands and aggregates, poor sanitation and management of solid waste, pollution by waste oil and other chemicals, limited food security, land clearing and de-vegetation are also impacting this[1].

Ending Violence against Women (EVAW) Programme: Through the Pacific EVAW Facility Fund, UN Women supports focused action on the prevention of and response to violence, exploitation and abuse of women and girls in Kiribati. The fund provides financial and technical support to organisations addressing EVAW throughout the country and supports the capacity building of government and civil society partners in providing multi-sectoral and survivor-focused VAW services. The grants facility component enables direct outreach to marginalised groups and VAW survivors, through better access to and availability of VAW services as well as knowledge on human rights and gender equality.

UN Women’s EVAW Programme has also led the formulation of the UN Joint Programme document on EVAW in Kiribati. The initiative is expected to start in 2014, bringing together the government, UN Agencies (ILO, UNDP, UNFPA, UNICEF, WHO and UN Women), civil society and other development partners in order to strengthen efforts to end violence against women and children. The focus is on assisting the government to implement its National Action Plan on Sexual and Gender-based violence.

UN Women provides stakeholders with access to virtual knowledge platforms, tools and evidence-based resources in order to better equip them with the knowledge and evidence to advocate for strengthened EVAW legislation, improved policies and services for violence against women survivors. The EVAW Programme, in collaboration with partner organisations, aims to inform women and girls about the availability of VAW services and to support social transformation through campaigns such as the United Nations Secretary General’s UNiTE to EVAW and Say NO-UNiTE.

Women’s Economic Empowerment (WEE) Programme: UN Women provides the government with technical assistance in producing knowledge products that will give decision-makers improved and comparable evidence on the economic situation of women in Kiribati.

Increasing Community Resilience through Empowerment of Women to Address Climate Change and Natural Hazards (IREACH) Programme: UN Women is supporting the adoption and implementation of gender equality commitments in strategic documents for climate change and disaster risk management through capacity development with stakeholders and the provision of knowledge products and tools on the gendered implications of climate change and disasters.

Press Release: Leading the way for Gender Equality in Malaysia's private sector
In a municipality in Timor-Leste, a father is taking action to prevent violence
Officer-in-Charge for UN Women Asia and the Pacific visits Sri Lanka
For better days and bigger dreams
Financial inclusion can be win-win for both financial institutions and women entrepreneurs: Speakers on International Women’s day 2022
END_OF_DOCUMENT_TOKEN_TO_BE_REPLACED