Cambodia’s Ministry of Women´s Affairs hosts a Consultative Review of progress made under the Beijing Platform for Action, 20 years on

On September 19, over 150 stakeholders from the Royal Government  of Cambodia, private sector and civil society gathered in Phnom Penh for the National Conference on Beijing Platform for Action+20 Review organized by the Ministry of Women’s Affairs with support from UN Women.  Twenty years on from the Beijing Platform for Action, participants were invited to identify successes, challenges and priorities in advancing gender equality in Cambodia since 1995. “The 20th anniversary of Beijing opens new opportunities to reconnect, regenerate commitment, and mobilize stakeholders to achieve [gender equality]”, said Ms. Claire Van der Vaeren, the UN Resident Coordinator in Cambodia in her welcome remarks. 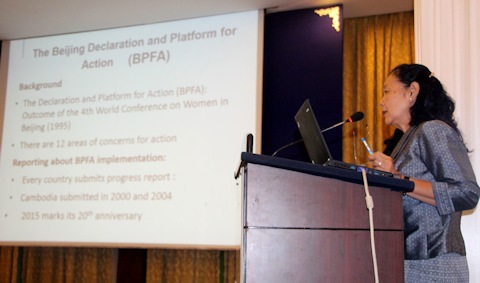 H.E. Samvada from the Ministry of Women´s Affairs presents results of the Cambodian national review on Beijing+20

The National Review process represents a constructive response to Resolution 2013/18 of the Economic and Social Council (24 July 2013), which called upon all states to undertake a review of the progress made and challenges encountered in the implementation of the Beijing Declaration and Platform for Action.

Identifying twelve Critical Areas of Concern, the Beijing Platform for Action recognized the empowerment of women and equality between women and men as prerequisites for achieving political, social, economic, cultural and environmental security for all. Addressing each of the Beijing Platform for Action’s twelve Critical Areas of Concern, the Conference participants provided inputs through small working groups.

Some of the key achievements identified in the Conference included improvements in the health sector that have seen health and nutrition services for Cambodian women reduce maternal and child mortality rates.  In addition, a strengthened law and policy framework, including the second National Action Plan to Prevent Violence Against Women, has seen improved partnership and coordination on combatting violence against women and gender based violence.  Cambodia has also been recognized as the third most improved country in the world in terms of gender responsive labour policy in the 2012 Women’s Economic Opportunities Index. 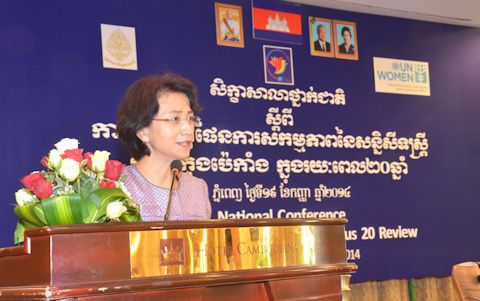 However, remaining challenges and priorities were also identified. “Cambodia’s women are lowest in educational attainment in the ASEAN region,…”, highlighted Dr Ing Khantha Phavi, Minister of  Women’s Affairs, “…however, Cambodian women’s engagement in the labour market is amongst the highest. The employment rate is high, but because of low education, it is vulnerable employment.”  Echoing this sentiment, participants identified women’s access to education and skills training as a priority for Cambodia in the post-2015 environment.  In addition, the need to continue to promote women’s leadership in the public and the private sector was also highlighted, as well as the need to effectively implement policies to prevent violence against women.  Building on all agreed points, the overall recommendation coming from the participants was to place women at the heart of all processes aimed at the empowerment of women.

“The outcome from today’s workshop was important...”, said Jenna Holliday, Women’s Economic Empowerment Specialist for UN Women’s Cambodia Country Office, “...as we move into 2015 and beyond, it is critical that all stakeholders jointly develop and agree upon the priorities for gender equality, in order to strengthen the partnerships towards its achievement”.

The conclusions of this Review will be shared at the “Asian and Pacific Conference on Gender Equality and Women’s Empowerment: Beijing+20 Review” and NGO Forum which will be held in November 2014.  The findings of the Regional Conference together with those of the NGO Forum will constitute an important input to the outcome document that will be taken to the 59th session of the Commission on the Status of Women (CSW59) in March 2015.

Related News
23/11/2014
Beijing+20 in the eyes of the media
28/04/2022
Cambodia receives funding from the Elsie Initiative Fund to identify barriers to the deployment of uniformed women to United Nations peace operations
09/12/2020
“As long as there is someone who needs my support, I will be there to provide assistance.”
15/03/2020
Celebrities promote gender equality in Cambodia
04/04/2019
From where I stand: “I can share, I can speak, and I can teach.”
END_OF_DOCUMENT_TOKEN_TO_BE_REPLACED