The Government of Denmark and UN Women signed an agreement for Danish grant assistance of DKK 3 Mio. (equivalent to NPR 54,000,000 or USD 560,600)  for supporting the work of ending violence against women and engendering national budgeting and policies for women in Nepal. 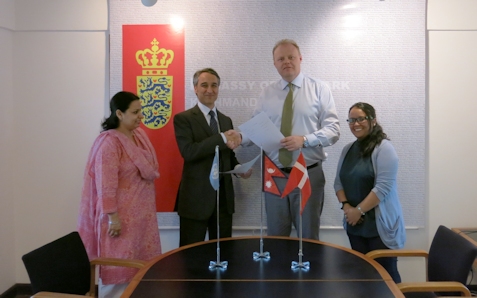 The Danish aid to UN Women is in line with the central objective of the Strategy for Denmark’s Development Cooperation (DANIDA) – the Right to a Better Life. The Embassy of Denmark is translating its global commitment by supporting UN Women in Nepal to advance efforts to address violence against women and strengthen gender responsive governance, national planning and budgeting in Nepal aligning with the Government of Nepal’s commitment.

“Our new support to UN Women in Nepal will contribute to the promotion of gender equality and women’s rights in Nepal. The support will address one of the main priorities of the Danish development assistance to Nepal through an important partnership with UN Women and their national partners,” says Jan Møller Hansen, Chargé d’Affaires, the Embassy of Denmark.

The support will focus on two thematic areas of UN Women’s Strategic Plan for 2014-17 that focuses on ending violence against women and girls in Nepal and engendering the Nepalese governance and national budget planning and policy implementation to advance gender equality commitments and priorities.

At the partnership signing ceremony, Ziad Sheikh, Representative of UN Women in Nepal says that “Investing in efforts to prevent and respond to violence against women and to strengthen gender responsive budgeting can deliver real change for women and girls. UN Women hopes this collaboration will pave the way for a longer term partnership in the post-2015 context to address structural inequalities and gender-based discrimination and to turn the tide for women’s empowerment and gender equality.”

The Government of Denmark has announced additional end-of-year core funding of DKK 20 million (USD 3.7 million) for UN Women. This adds to its prior contribution in 2013 of USD 6.9 million – bringing Denmark’s overall 2013 contribution to approximately USD 10.6 million.

UN Women relies entirely on voluntary financial contributions to sustain its work and programmes for gender equality and women’s empowerment. In 2013, 135 Governments made generous commitments to reach this objective, through core funding that provides UN Women with flexible resources that can be used for all its work, including under-funded or emerging priorities.

Related News
01/05/2014
Press release: Danish support to UN Women in Nepal
29/06/2022
A Budgeting for an Inclusive Development in Baucau
01/06/2022
One Step at a Time
05/04/2022
New report: To combat violent extremism in South-East Asia, the study calls to step up regional efforts to implement gender-responsive strategies
20/12/2021
In Cox’s Bazar, gender-responsive policing efforts build trust with Rohingya women and girls
END_OF_DOCUMENT_TOKEN_TO_BE_REPLACED