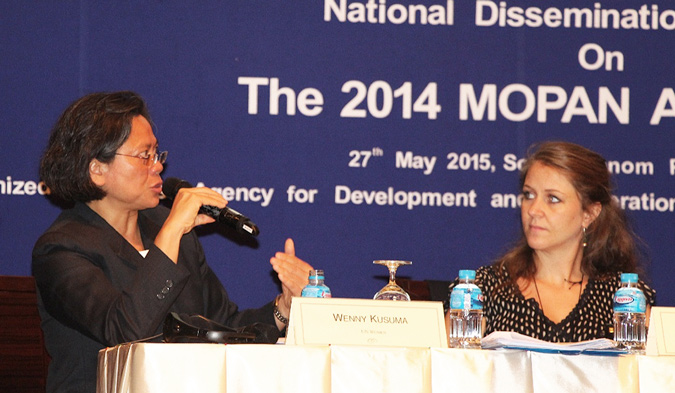 How to measure the effectiveness and results of a multilateral organization such as UN Women? In Phnom Penh, Cambodia this week, an important MOPAN workshop took place to shed light on the issue, writes Mariken Harbitz.

“At UN Women Cambodia, we embrace evaluations. If results are good we want to hear it, if the results are bad we definitely want to hear it. This is the only way we move forward,” said UN Women Country Representative Wenny Kusuma during the presentation of the Multilateral Organization Performance Assessment Network (MOPAN), an independent quality control body, comprised of a network of 19 donor countries to assess organizational effectiveness of major multi-lateral development agencies, including the United Nations.

MOPAN assessed three UN agencies in 2014 through document reviews, surveys and interviews. This is the first assessment ever done of UN Women. Apart from the Cambodia duty station, UN Women offices in other five locations were evaluated - Bangladesh, The Democratic Republic of Congo, Ecuador, Kenya and Tanzania.

The evaluation showed that UN Women Cambodia maintains a strong focus on gender equality, good governance and human rights based approaches in its operation.

The young age of UN Women was highlighted as an important reason to why some of the findings were of an adequate, rather than strong character. - Being the “baby on the block” brings with it its challenges, said Kusuma.

“This is the last milestone in an important exercise where we all participated,” said Rahel Boesch, Director of Operations at the Swiss Agency for Development and Cooperation, which is the lead agency of the 2014 MOPAN evaluation. The aim of the workshop was to share key findings, and promote learning over time. The United Nations Population Fund and the Food and Agriculture Organization of the United Nations were also assessed by the MOPAN in 2014.

Related News
17/07/2015
Youth getting integrated in the election process
15/07/2022
UN Women works with the Government and civil society on training to protect women and children from conflicts in Aceh, Indonesia
28/04/2022
Cambodia receives funding from the Elsie Initiative Fund to identify barriers to the deployment of uniformed women to United Nations peace operations
22/12/2021
Cooperation Key to Ensuring Rights-based Migration in Asia-Pacific
20/12/2021
In Cox’s Bazar, gender-responsive policing efforts build trust with Rohingya women and girls
END_OF_DOCUMENT_TOKEN_TO_BE_REPLACED