Timor-Leste: 100 per cent Ready for Women in Leadership

Timor-Leste is developing at a swift pace since restoring its independence in 2002, however one of its biggest transformations is a movement that is growing quietly behind closed doors. Inspired by the Nation’s proud history of resistance during years of occupation, over 100 women from Timor-Leste’s 13 municipalities have come together in the capital city of Dili to talk politics. 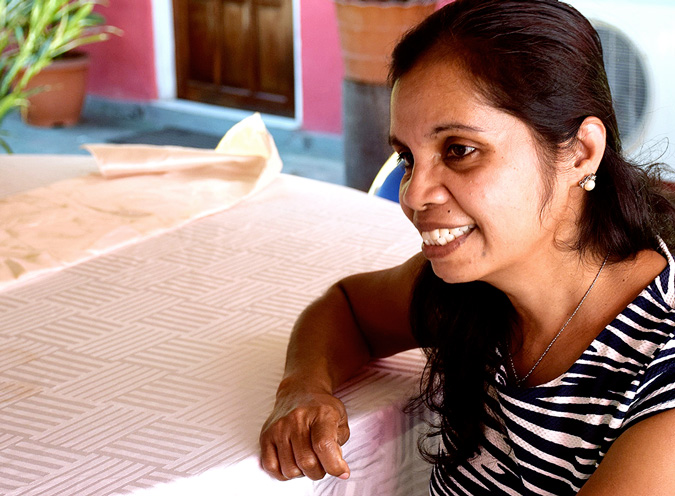 The event that has brought them together is the first 100 per cent Hau Prontu (or the “I am 100 per cent Ready”) workshop. Supported by numerous government partners, civil society organisations and international agencies including UN Women, the training event aims to ready at least 100 women from across the nation for local politics, encouraging participants to run for suco (village) elections this coming December.

“Currently, only 2 per cent of suco leaders are women,” explains Laura Pina, the director of the women’s organization Patria and a key organizer of the workshop. The 2 per cent statistic stands in stark contrast to women’s representation in Timor-Leste’s National Parliament, which boasts the highest percentage of women in Parliament in the Asia Pacific region at 38 per cent. This difference, explains Pina, is a result of cultural changes happening in the capital that have not yet broken through the strong patriarchal culture in the municipalities.

“We were inspired to start this campaign because there are many potential women leaders at suco level - they just need to be shown the road.” Running through topics ranging from campaigning, to public speaking skills, the workshop hopes to guide participants in taking part in the decision-making process.

“When only men make decisions they are unable to understand the different needs women have to men. Women have a dual function as leaders (and carers), giving them a better understanding not just of what women need, but of what whole families including women, children and men, need,” reflects Regina de Sousa. Invited to the workshop as a prime example of a successful female in local politics, de Sousa is the current administrator for the sub-district of Baucau with no plans to stop her outspoken political involvement.

“At this national workshop I am accompanying my fellow women to encourage them to run for suco leadership. Based on my experience over the years, women’s participation in decision-making at the local level is minimal,” de Sousa explains.

Impassioned by the cause, she goes on to highlight that the campaign is essential for all members of the community, as when women’s voices have the power to represent many of the needs of the community that may otherwise be forgotten. “When only men make the decisions we only get half the picture! For example, men may think that road development is the most important local issue. However, women believe it is access to clean water because that is the most basic need of the household. Good roads will only help men who have cars and motorbikes, not the whole family.” 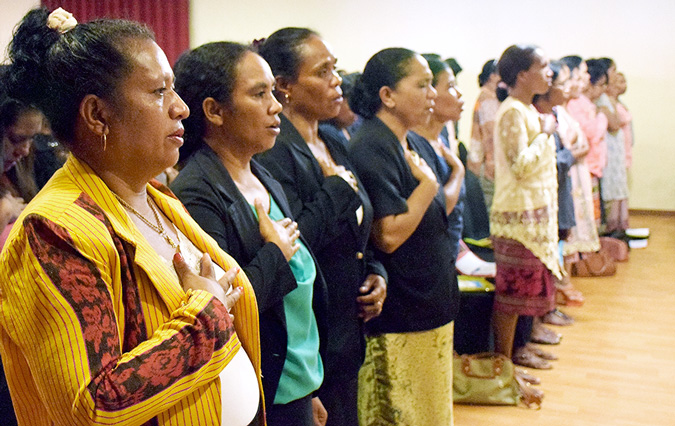 Over 100 women stand together to sing the national anthem, opening the 100 per cent Hau Prontu workshop. Photo: Christina Yiannakis

Once the workshop is over the campaign will continue by providing information and support to the women candidates through continued training, lobbying, and advocacy efforts to help promote the women’s policies and their capabilities as leaders. The next great challenge, Laura Pina explains, will be to help communities change their perception of women’s traditional roles, “This campaign is vital to shifting community opinion, to showing people that women are not just wives and mothers, but capable leaders at all levels.”

Related News
09/09/2021
Expert’s Take: “Advocating for women and girls’ right to education starts within our homes and communities, stretching to decision-makers.”
17/05/2021
Timor-Leste’s marginalized LGBTI community lead front-line response to Cyclone Seroja
08/02/2021
Getting to know UN Women staff
08/02/2021
From where I stand: "People living with disability in Timor-Leste need respect, not charity”
08/02/2021
For Equality and the Economy: Exploring the Gender Dimension of Timor-Leste’s Tourism Sector
END_OF_DOCUMENT_TOKEN_TO_BE_REPLACED