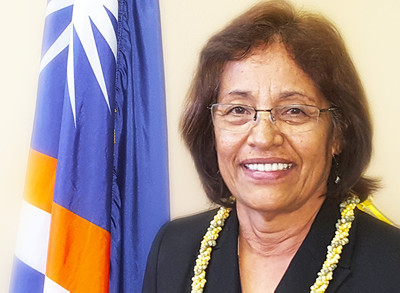 On 27 January 2016 the Republic of Marshall Islands elected its first female president; also the first woman ever to lead an independent Pacific nation.

A former Minister for Education, Dr Hilda Heine was one of three women elected to the 33-member Nitijela (the Marshall Islands Parliament) in the November 2015 elections and entered parliament for her second term as a senator. She is the first, and currently only, Marshallese citizen to achieve a doctorate and has built a career in education – serving as a teacher and educator, President of the College of the Marshall Islands before becoming Secretary for Education under the previous president.

Collaborating on the Leadership Pacific initiative since 2001, Dr Heine was one of a number of key Pacific educators who spearheaded leadership development workshops for University of South Pacific student, regional educators, community, NGO and public officers and many Pacific students in New Zealand.

Dr Heine is also the founder and a current advisor to Women United Together Marshall islands, an organisation that looks to serve as the voice of Marshallese women and implements a number of projects dealing with violence against women, HIV/AIDS, health and women in leadership.

A collection of five islands and 29 atolls, the Republic of the Marshall Islands has a population of just over 54,000 and has only elected a handful of women as senators since independence in 1979. The Pacific as a region has the world’s lowest percentage of women in parliament, a combined average of 6.1 per cent (excluding the French territories) and women continue to face a number of barriers when looking to take on leadership roles at every level of society.Filmmaker Jack Niedenthal, who stood unsuccessfully at the last election, told ABC Radio that Dr Heine is very intelligent and politically savvy.

“She’s a very impressive person when you sit with her in a meeting, and she’s a very deep thinker about almost any issue that comes upon her.”