Bangkok, Thailand – In preparation for the 16 Days of Activism against Gender-Based Violence Campaign 2015, UN Women Regional Office for Asia and the Pacific (ROAP) celebrated the first Bangkok International Film Festival on Ending Violence against Women and Girls (EVAWGFilmFest), which took place from 26th to 29th November 2015, at the SF Cinema in Central World, in Bangkok, Thailand.

The film festival aimed to raise public awareness of the multiple forms of violence women and girls (VAWG) continue to face around the world, and to mobilize broad support for preventing such violence before it starts. The films were selected to reflect diversity in terms of ethnicity, age and gender, based on their empowering messages, and promotion of gender equality and women’s and girls’ rights. Nine award-winning feature films and documentaries from Argentina, France, Germany, Israel, Pakistan, Singapore, Spain and the United States were screened for free during this four-day film festival. The event focus on issues that millions of women and girls across the world endure, including: domestic violence, child marriage, “honour” killings, sexual harassment, and rape, but also on broader issues of discrimination such as limited access to education and unsafe labour migration. 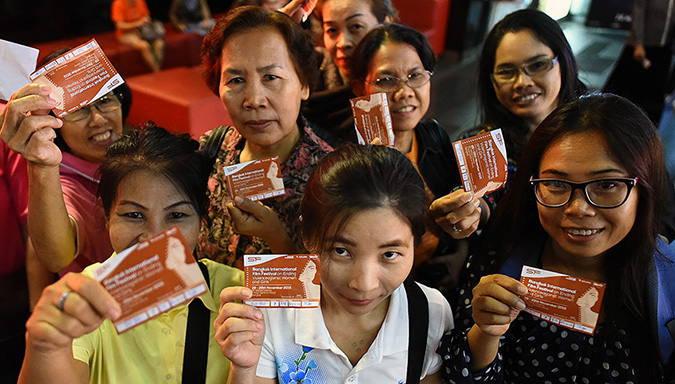 The EVAWGFilmFest launched with an opening reception which attracted close to 300 attendees, comprising members of the press, the diplomatic corps, national celebrities, UN agencies, and development partners, all of whom came to show their support for the event. The reception was organized by UN Women as part of its engagement around the 16 Days of Activism, in line with the global UN theme “Orange the World”, and in support of the UNiTE Campaign and HeForShe. As part of the UN Women Asia Pacific website, the Film Festival website was hosting the event announcement functions, and all related information, as a comprehensive information hub, together with its Facebook event. The Australian Ambassador, HE Paul Robilliard, and Professor Naila Kabeer of the London School of Economics, joined UN Women ROAP in making remarks at the opening ceremony. The Ambassadors of the United States, Sweden, Spain and Israel were also in attendance, together with national celebrities who spoke to the press about the importance of preventing all forms of VAWG. The participants subsequently joined a full-house screening of Dukhtar, a Pakistani award-winning feature that tells the story of a mother who leaves her home to save her 10-year old daughter from being forced into marriage with an elderly tribal leader.

On November 27th, the film festival presented the film Ilo Ilo from Singapore, which tells the fictional story of a migrant worker. The film was followed by a panel discussion on migrant workers and violence, organized in partnership with the International Labour Organization. The Spanish film Te doy mis ojos (Take my eyes), critically acclaimed for its unclichéd treatment of domestic violence, ended the second days’ screenings. November 28th commenced with When we leave, a film focused on the struggle of a young German woman of Turkish descent, for independence from her traditional family. The subsequent documentary, Girl Rising, told the moving stories of nine girls from around the world and their quest for education. The screening was shadowed by a side event on education and violence, with participation from representatives of the United Nations Educational, Scientific and Cultural Organization and UN Women. This theme was also explored in the last screening of the third day with the movie Girlhood. The final day of the EVAWGFilmFest addressed different accounts of domestic violence with the screening of the Argentine film Refugiado (Refugee), and the U.S. documentary Private Violence. Related remarks, organized in collaboration with the U.S. Embassy and USAID, were held afterwards. The film festival concluded with the empowering Israeli/American documentary Brave Miss World in which Linor Abargil, former winner of the Miss World pageant, turns her story of tragedy into a form of global activism against rape.

Using cinema culture as a platform for activism, it was found to be a significant opportunity for outreach given the number and diversity of attendees and the vast outreach achieved through the online and press media. The use of Thai and English subtitles, as well the promotion of the festival through national channels, ensured that films were accessible to all, including local and international audiences, and particularly the youth population. The film festival enhanced outreach, media visibility and brand strengthening for UN Women, UNiTE and HeForShe: More than 2000 people attended the four-day event; 19 post in Facebook generated 683 likes and 228 shares; the hashtag #EVAWGFilmFest gained accumulatively 50,568 impressions in Twitter; 5,319 total views were reached of the film festival website; the Facebook event reached 86,000 people and engaged 1,500; More than 60 pieces were published in many of the most important online and press media; Close to 100 members of the press attended the opening reception with full house at the theatre; and partnerships with donors, celebrities, UN Agencies, cultural institutions and media partners were strengthened. The EVAWGFilmFest, aligned with the UN Women mandate on ending violence against women and girls (EVAWG), significantly contributed to ongoing advocacy on the topic, and provided a platform for audiences to be exposed to the diversity of issues included under global EVAWG agenda. 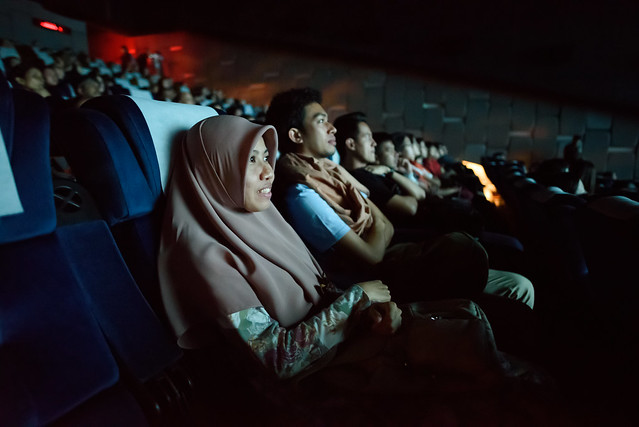 In recognition of the 16 Days of Activism Against Gender-based Violence and in support of the HeForShe movement, UN Women launched the powerful multi-media campaign Faces of Prevention, in partnership with the United States Embassy in Thailand and United States Agency for International Development (USAID). Faces of Prevention sought to reframe the conversation surrounding gender-based violence in a way that inspires everyone to see it as his or her responsibility to do something, big or small, to prevent and end violence, and to support victims and survivors. 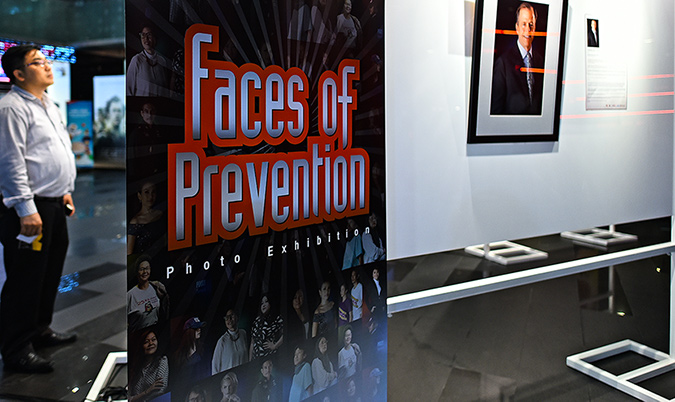 The initiative highlighted Thailand’s “heroes of prevention” –those working to prevent and eliminate gender-based violence in the country– by showcasing 16 photographs/profiles of the individuals being celebrated for their work. The exhibition of the printed photographs/profiles was curated to coincide with the EVAWGFilmFest, and held from 26 to 29 November in SF Cinema Central World. The campaign was also promoted on different social media channels such as Flickr, Twitter and Facebook, and reached almost 40,000 impressions on Twitter.

A new Public Service Announcement (PSA) “Active bystander” was screened before each film during the Film Festival, in order to reinforce the prevention and awareness-raising component of the EVAWGFilmFest. In support of the UNiTE Campaign and HeForShe, the video has the objective to encourage young people especially young men, to take action on ending VAWG. It was produced in Thailand by UN Women, with the support of the Danish Government and through an institutional service contract with a private sector advertising company.

The piece includes the participation of the most famous Muaythai boxer, Buakaw Banchamek, and follows a positive bystander approach –one that aspires to increase individual intervention in in situations of harassment in public spaces.

The video PSA was largely promoted throughout the Film Festival and through the UN Women ROAP website and social media channels such as Facebook, YouTube, Twitter and Flickr. In two months, the video PSA has reached almost 500,000 people on social media. It was also broadcasted on The Nation TV on 22nd November as part of the special interview with UN Women Executive Director.

Related News
08/03/2022
New UN Study says Fear, Violence, and Isolation Prevents Myanmar Women from Accessing Income and Healthcare
15/03/2021
I am Generation Equality: Net Supatravanij, Thai social entrepreneur and activist against gender-based violence
09/12/2020
“It fulfils and motivates me when they say ‘Thank you’, when I see them empowered, knowing where to seek help.”
15/10/2020
Thai celebrity Cindy Sirinya Bishop campaigning for women’s rights as new UN Women Regional Goodwill Ambassador for Asia and the Pacific
11/03/2016
UN Women and UNDP Meet with Future Leaders of Malaysia
END_OF_DOCUMENT_TOKEN_TO_BE_REPLACED