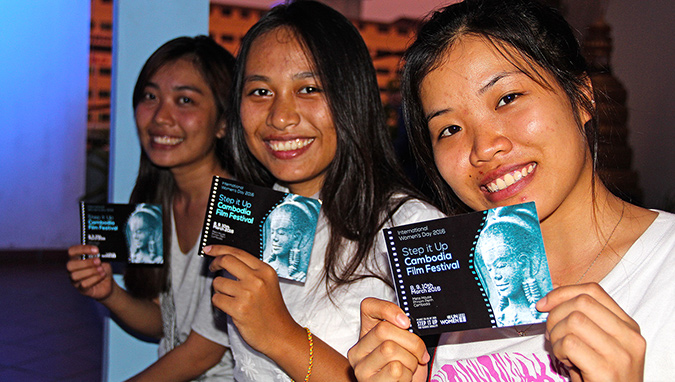 Participants at the film festival before the screening of the first movie. Photo: UN Women/Mariken B. Harbitz

“If we only see the world through men’s eyes we are missing half the picture,’’ Sarah Knibbs from UN Women kicked off proceedings at the Step It Up International Women’s Day Film Festival on the 8th March. She made thoughtful remarks on the differing struggles and challenging life experiences faced by Cambodian women, both in the present day, and during the Khmer Rouge years. 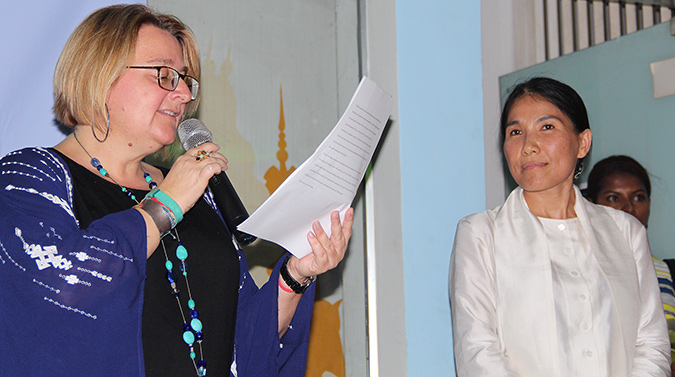 The Meta House outdoor cinema was full to the brim for the opening night of the three day event, with a diverse and international audience including young Cambodians, NGO representatives and ambassadors. This diversity was beautifully reflected on screen, with a range of exciting subject matters and interlinked stories presented through a lens of female empowerment.

Ranging from the moving story of a lesbian couple in ‘Two Girls Against the Rain’, which highlights the difficulties faced by same sex couples through the Khmer Rouge regime, to the short documentary film ‘Choices In Life’, where the daily life of a mother struggling to provide for her children evidences the challenges Cambodian women still face on a daily basis, both films touched on issues relevant in Cambodia, but also in wider society today. Sao Sopheak (‘Two Girls Against the Rain’) and Ngoeum Phally (‘Choices in Life’) both reflected upon their experiences with directing in this largely male dominated industry, and how they were able overcome these challenges to produce films with resilient, brave and engaging female protagonists.

As part of the Step It Up for Gender Equality campaign, Sarah Knibbs added that she hoped audience members would leave feeling motivated to play a role in demanding change for women and girls, both in Cambodia and around the world. Guest speaker Kulikar Sotho, director of ‘The Last Reel’ went on to emphasize Sarah’s words upon introducing her movie, and explained the significance of the relationships between mothers and daughters in her film. Sotho spoke of the difficulties she faced in finding an actress to fully embody the courage and determination of her main character, but saw “inner strength” in the talented Ma Rynet, who plays Sophoun. She stressed the importance of the character as a symbol of female empowerment. The award winning feature length movie was the perfect close to the evening; symbolically linking past and present, tying together themes of traditional Cambodian family values and the restrictions and confines they can place on women and girls. Sophoun, the strong young woman at the forefront of the narrative uncovers hidden truths about the traumas and devastation caused by the Khmer Rouge, and comes to realise how this has impacted her life, and will continue to impact on generations to come.

Opening on International Women’s Day, the film festivities took place over three days, bringing to the fore significant questions about what it means to be a woman both historically and in modern day Cambodia. Over the three days a colourful variety of short and long documentary and drama films were screened to a diverse and engaged audience, and the issues raised discussions about the distance Cambodia has come in terms of raising Cambodian women’s voices, and what still needs to be done to amplify them even further. 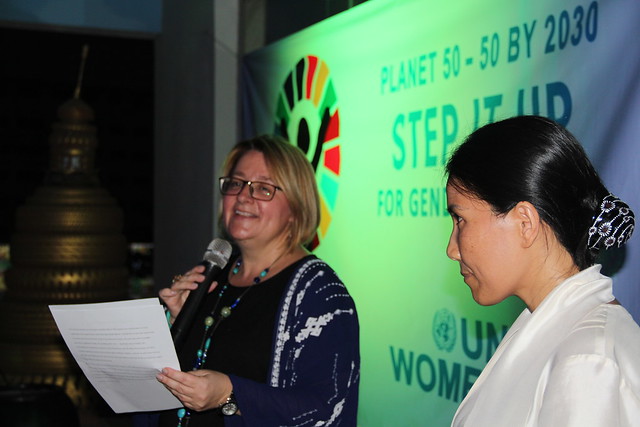 Related News
28/04/2022
Cambodia receives funding from the Elsie Initiative Fund to identify barriers to the deployment of uniformed women to United Nations peace operations
09/12/2020
“As long as there is someone who needs my support, I will be there to provide assistance.”
15/03/2020
Celebrities promote gender equality in Cambodia
04/04/2019
From where I stand: “I can share, I can speak, and I can teach.”
19/12/2018
UN Women promotes use of gender statistics for sustainable development in Cambodia
END_OF_DOCUMENT_TOKEN_TO_BE_REPLACED